A Delft Blue Tile: Material Memories of a British Erasmus Student in the Netherlands

The University of Nottingham in England is one of many places in the world where the Dutch language is studied. Here, Louise Ingoldby, one Nottingham language student shares a memory of her semester spent in the Netherlands. Her story was originally told as part of her final exams. The assignment: to write about an object that carries a personal memory, as well as speaking to the reader with a more generally applicable insight. Louise Ingoldby chose an object that brings its general wisdom across very clearly indeed: a tile inscribed with a homely maxim in Delft blue.

Sadly, Ingoldby was one of the last students to graduate in Low Countries studies from the University of Nottingham, as the degree programme has been discontinued. Soon, only two places will be left in the UK for the academic study of the Dutch language. Still, I think we can rest assured that Brits like Ingoldby will continue to travel the four corners of the Low Countries in order to meet more strangers! 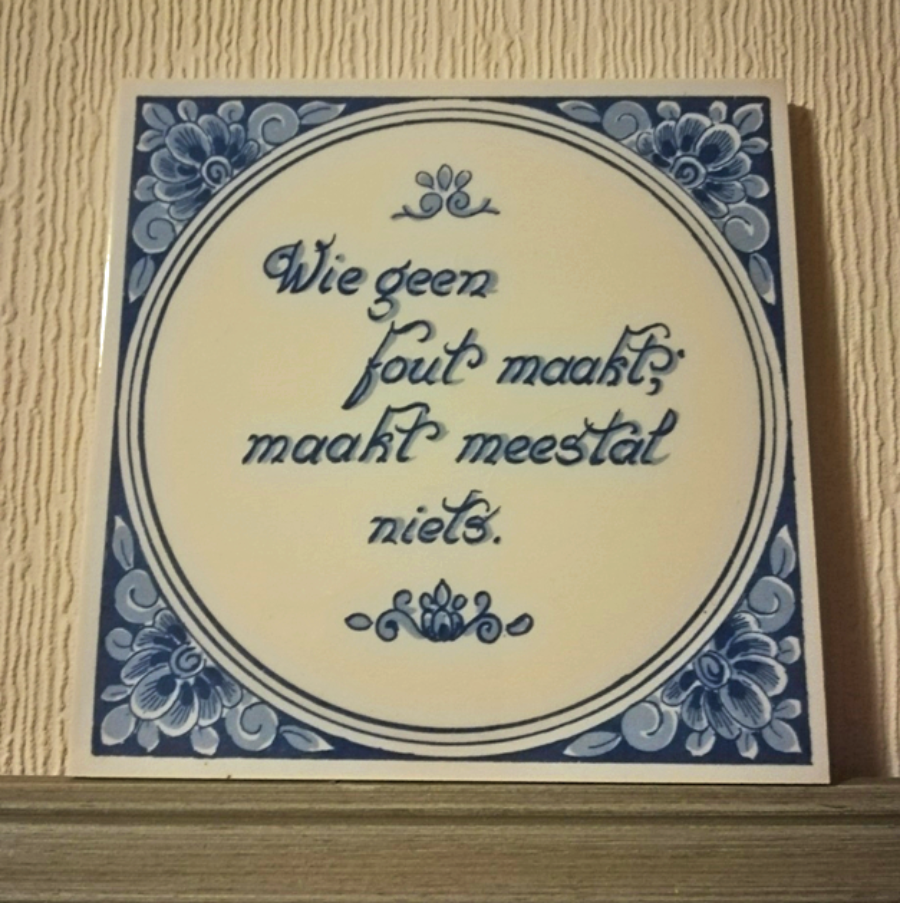 The person who never made a mistake never tried anything new – a very important piece of tile wisdom.

So much wisdom written on such a small tile! The first object I see every morning when I wake up is a beautifully delicate and ornate Delft Blue tile, onto which these words have been so carefully painted. This tile hangs on my bedroom wall in Nottingham, amidst the rainbow of garish and rather cheap-looking posters. Aside from the books in my room, it is probably the only object to hold any value. In fact, this tile holds value beyond any price.

A month after I moved to the Netherlands during my year abroad, I was, to tell the truth, a bit lonely. As a result, I went on the lookout out for friendship and also for a foreign boyfriend. I was in love with the idea of having a foreign boyfriend and it is for this reason that I decided to travel to Delft for just one tinder date. From Groningen to Delft. Yes, I know what you must all be thinking right about now: three hours on a train for just one tinder date – how much of a chump can you be?!

I still remember the feeling of excitement looking out of the train window at the breath-taking view. Once I had arrived in Delft, I sent a message to my date to let him know that I was waiting for him in the square in front of the station. Two hours later and still no reply. I began to worry and thought the best solution to this would be a nice distraction, so I paid a visit to the "Royal Delft" factory.

Varnished white and blue tiles hung all around and during some of the demonstrations given by the artists themselves, I discovered that these world-famous tiles often consist of not only an image but also a saying. The so-called tile wisdom. Moreover, I learned that since the Middle Ages, these tile wisdoms have been used to teach some well-known truths in the Netherlands.

8 p.m and still no reply from my date. I called him again. Nothing. He’d just disappeared off the face of the earth! By 9 p.m. it became clear that he was no longer coming. Tired and embarrassed, I decided to book a hotel room.

For thousands of years humans have been making objects out of clay and for thousands of years humans have been making mistakes, including myself, of course: I had spent three hours on a train just to meet up with an unknown man, because, at that point in time, I was feeling a bit lonely, only to be bitterly disappointed. It is precisely because of this turn of unfortunate events that I went back to the factory the next day to buy one of these impressive Delft Blue tiles. I chose one with the expression 'the person who never made a mistake never tried anything new' so as to always remind myself that sometimes one puts oneself in a difficult situation - a situation which unfortunately costs the price of a long train journey and night in a hotel - but from which one can always learn something very important: never go to the ends of the earth or in this case, the Netherlands, for a stranger!

This tile will forever hang on my bedroom wall, wherever that may be, because this ancient wisdom is still as true today as it was back then.

This is a beautiful story, one of the most beautiful I read on these pages. It's rather uncommon someone writes in that way about his or her errors and misfortune.

Some considerations:
(1) Are Groningen-boys that dull you decided to travel to Delft?
(2) After all, your Delft date did a good job, making you discover Delft, visit the tile factory and write us your instructive experience.
(3) You showed how to meet a lot of people without meeting a single one.

Did you know that in Dutch your experience (to have a date who doesn't come, or even rejects you) is called "een blauwtje lopen" (to run or to get a small blue)? From Delft?