An Optical Revolution in the Middle Ages. The Hidden Talents of Jan van Eyck

The oil paintings of Jan van Eyck differ so significantly from the work of his contemporaries that he is often seen as a star that fell out of nowhere. His refined oil painting techniques, pointed observations of the world and talent for depicting essentially intangible light have yet to be equalled. Now there is a chance to enjoy Van Eyck’s masterful talent at The Optical Revolution, an exhibition at the Museum of Fine Arts in Ghent until 30 April 2020.

Unlike many other important artists, Jan van Eyck (c. 1390-1441) has never sunk into oblivion. His impact was such that his myth took form shortly after his death and his work has been imitated ever since. From as early as the 16th century, manuscript sources reflect both respect and admiration for his artistic genius and near-miraculous work. 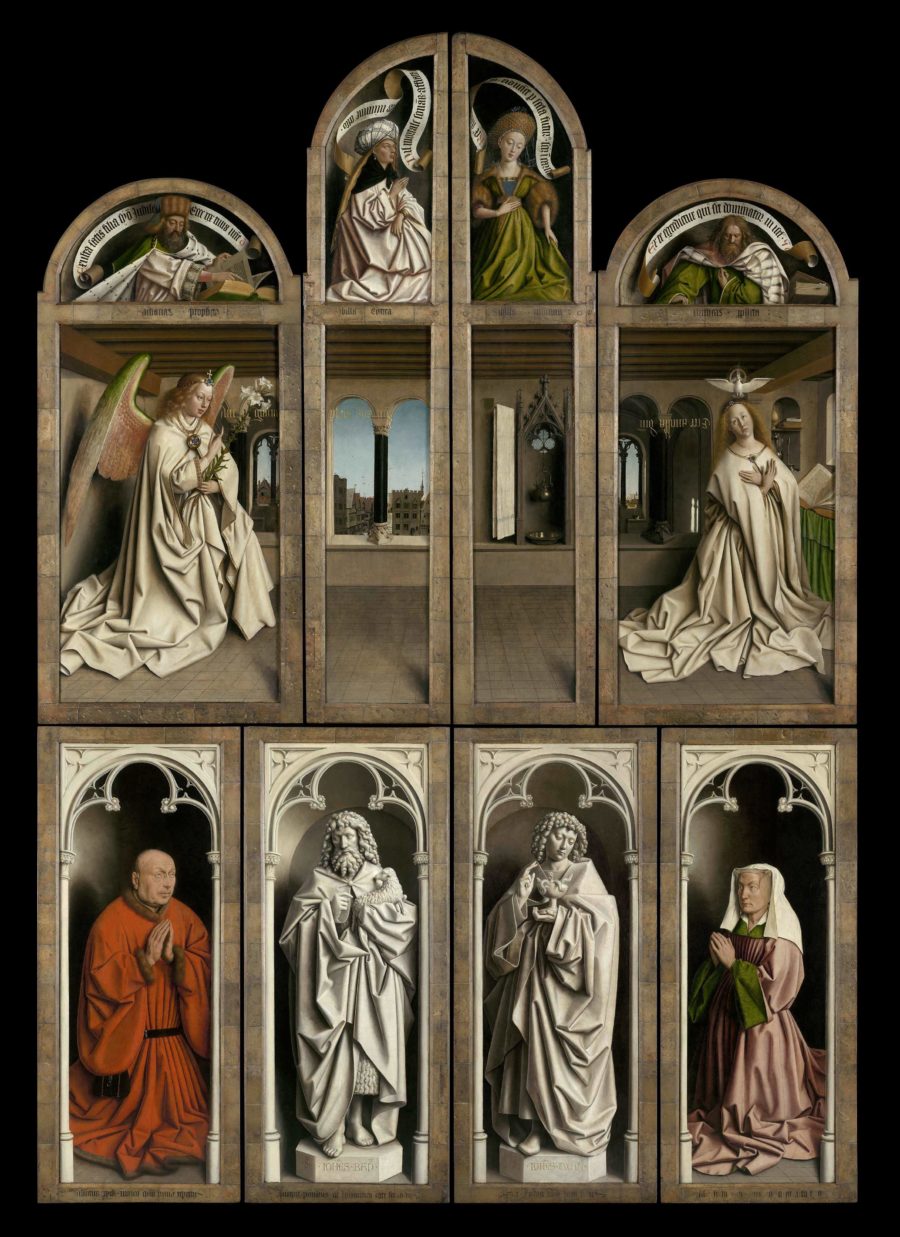 Because of his discoveries in oil painting, Van Eyck’s work was amongst the twenty prints published around 1590 in Florence as the Nova Reperta (New Discoveries). His painting technique developed alongside the invention of the printing press, the compass, spectacles, gunpowder, windmills and the discovery of America. The exceptional fame of The Adoration of the Mystic Lamb, also referred to as the Ghent Altarpiece, led the Spanish king Philip II to request a copy from Michael Coxcie around 1558. Napoleon and Hitler were also admirers of Van Eyck’s masterpiece and, because neither was satisfied with a mere copy, it has been removed and returned more than once from Belgium.

When the Adoration of the Mystic Lamb was returned from Germany to Belgium after the Second World War, it was investigated, restored and re-varnished. Unfortunately, the modern varnish was not light-resistant and, as a result, the painting had become discoloured. Once the varnish was removed it became clear that large sections of the canvas were covered with dense layers of paint, thus Van Eyck’s exceptional use of colour, his impeccable attention to detail and the intensely tactile nature of his paintings had been hidden from viewers for generations. 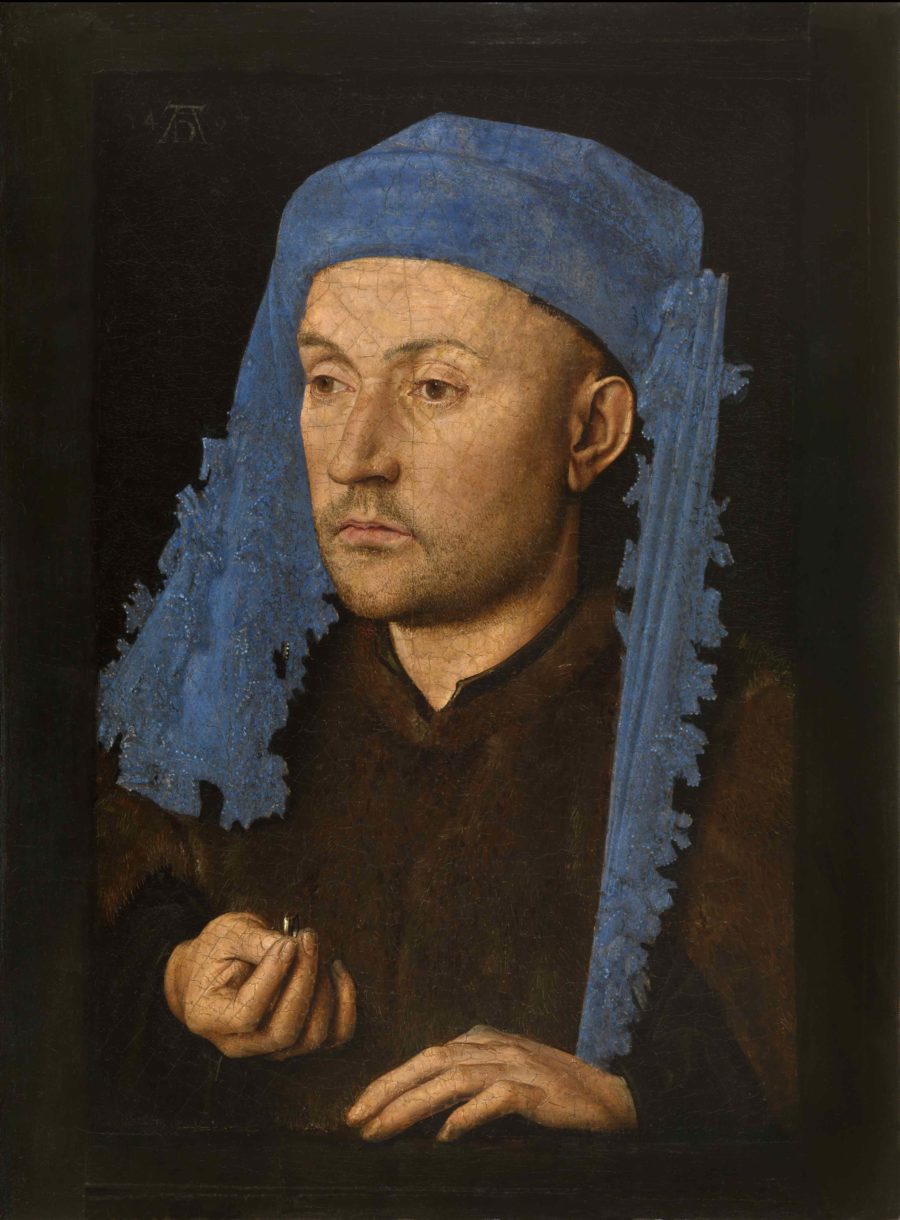 However, during recent restoration work and the accompanying investigations, begun in 2012 by the Royal Institute for Cultural Heritage at the Museum of Fine Arts in Ghent, new insights about Van Eyck’s methods and studio have come to light and the optical revolution engendered by Van Eyck’s work can be experienced.

The recently restored panels of The Adoration of the Mystic Lamb (1432) are at the centre of the exhibition Van Eyck: An Optical Revolution. Exceptionally, the outer wings and the Adam and Eve panels have been combined with other paintings by the master himself, works from his studio, modern derivatives and interpretations from the end of the 15th and the beginning of the 16th century.

To sketch the artistic context and evoke the cultural cross-pollination of the early 15th century in the Burgundian Netherlands, works in all media including miniatures, line-drawings, sculptures, metallurgy and textiles are included in the exhibition, providing a broader perspective of Van Eyck’s optical revolution. Additionally, his works are shown next to those of his Italian contemporaries such as Gentile da Fabriano, Fra Angelico, Pisanello, Tommaso Masaccio and Benozzo Gozzoli. While Van Eyck was revolutionising painting in Northern Europe, Gozzoli was fomenting his own painting revolution in Florence through improvements in the fabrication of tempera and the use of mathematical perspective. 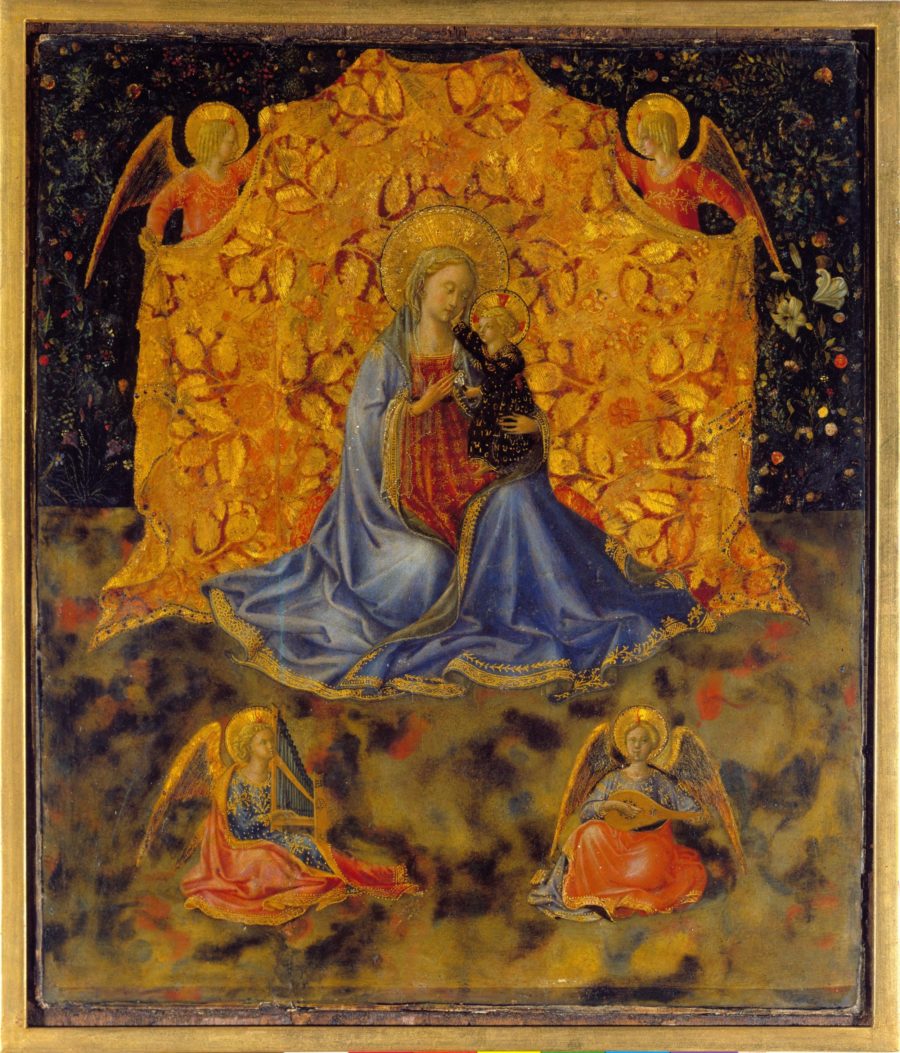 Van Eyck’s optical revolution was born out of three elements: his refined oil-painting techniques, pointed observations of the world and unique talent for painting light that is almost tangible. These elements infuse his works with an exceptional realism of place that was not only the result of impeccable precision in depicting light within space but probably also due to his scientific knowledge.

Van Eyck’s talent for painting light stemmed from his observation of the interactions of light and shadow; and it is this that makes people, objects and interior space seem three-dimensional in his work. The images of St. John the Baptist and St. John the Evangelist on the lower panels of The Adoration of the Mystic Lamb are painted but the technique of using grey tones, or grisaille painting, and the way in which the subjects’ faces and clothing are defined by the use of shadow and light make the painted images into stone saints to which viewers can kneel in supplication. This revolutionary use of light and shadow continues in the depictions of people or objects in the background. For example, the shadow of the winged archangel Gabriel, formed by the light coming from the right-hand side, can be clearly seen on the wall behind him and is carried over onto the wing panels. 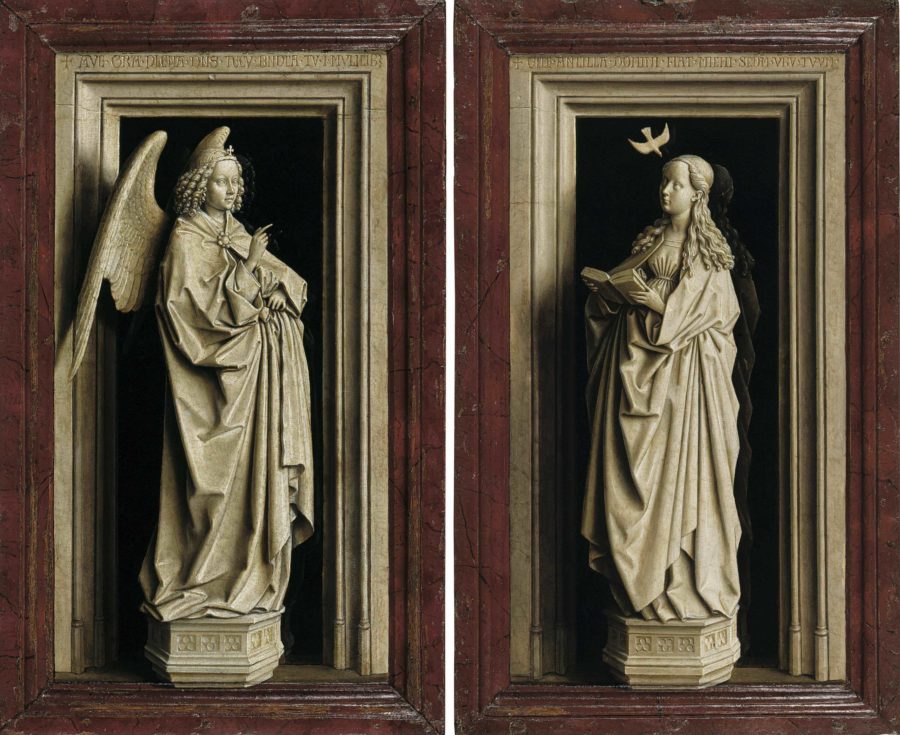 Van Eyck’s depiction of light is not only true to nature, but also strikingly accurate and coherent. His skill becomes even more impressive when one considers that he had only daylight or candlelight at his disposal. It seems impossible that the observation and reproduction of the complex behaviours of light such as reflection, absorption or interruption came about by happy accident. In fact, the exhibition starts from the hypothesis that Van Eyck based his work on theoretical knowledge of optics as well as his unparalleled observational skills.

Van Eyck may have learned about optics from the writings of the Arabic mathematician-astronomer Alhazen (c. 965-1040) whose work, translated into Latin as De Aspectibus, was well-known in Europe by the 15th century. The Biekorf Library in Bruges holds a manuscript copy of this text from the Cistercian Abbey of the Dunes (Ten Duinen Abdij) in Koksijde, Belgium. Amongst others, De Aspectibus presents new theories concerning how we see, how mirrors and lenses function and how images are formed. 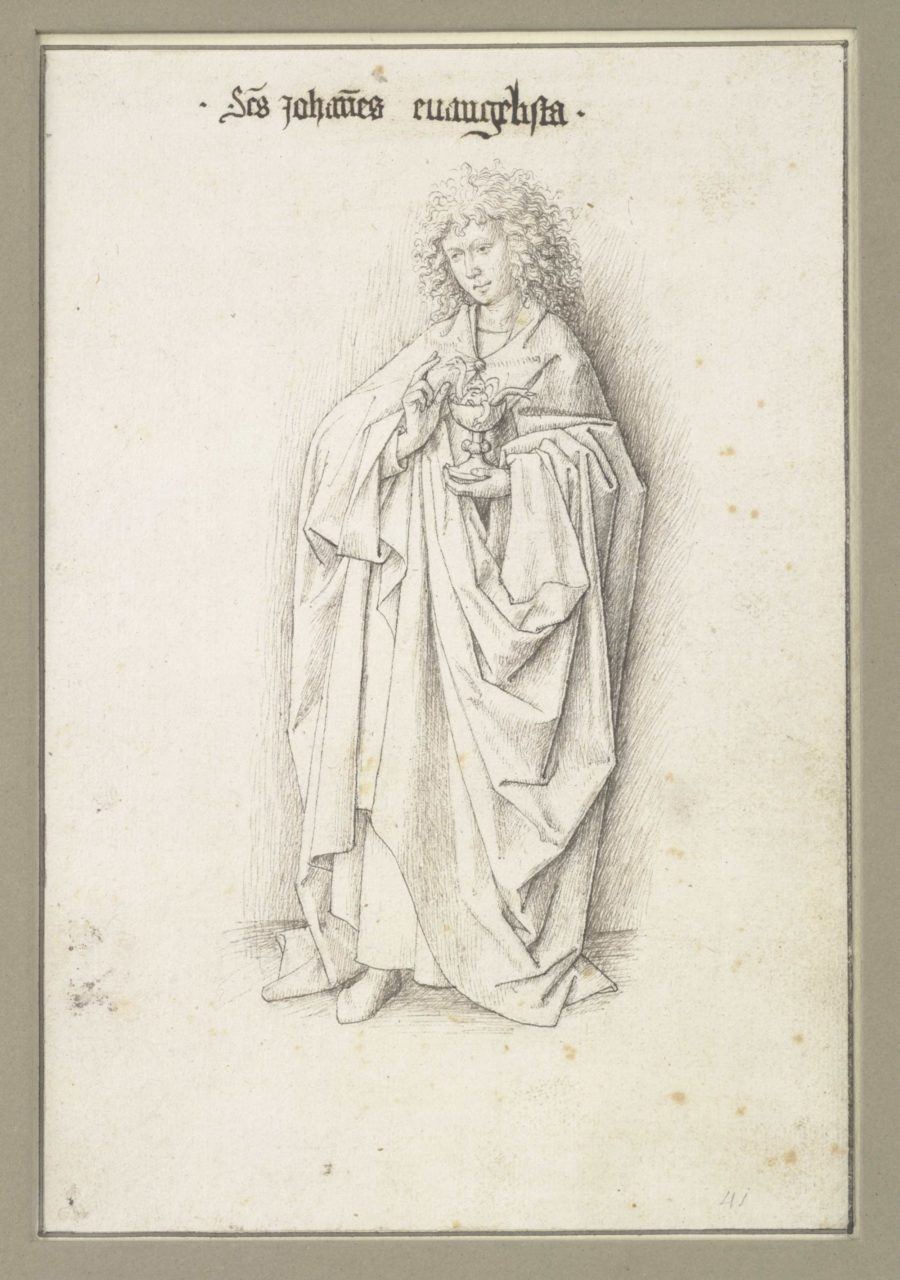 Despite the availability of Alhazen’s work, however, it seems more probable that Van Eyck used John Pecham’s (c. 1230-1292) Perspectiva Communis. Because Pecham’s writings on the subject of optics were shorter and less complex than Alhazen’s, they were studied in universities to provide a better introduction to the principles such as the direction of light and its resultant shadows, as well as more evolved concepts such as luminosity and how to capture reflections, distortions; as well as the phenomenon of the focal point.

Jan van Eyck’s optical revolution has influenced the art that has come afterwards. Indeed, before and after have rarely been so clearly separated in the field of Art History. His meticulous observation and precise reproduction of the visible world set a new standard and have retained their influence for centuries. His paintings were extremely advanced for his time and must have seemed almost other-worldly.

Yet nothing happens in a vacuum; not even great art. Van Eyck’s optical revolution was made possible by many factors, including the healthy creative and economic climate of the Burgundian Netherlands in which his genius could reach its full potential. The painter, his apprentices and clients lived and worked in a dynamic context that made the luxury-goods market of 15th-century Ghent and Bruges possible. The intersection of court and urban culture formed the basis for a flourishing artistic environment in the Burgundian Netherlands and, as a court painter, Van Eyck was in the position to make the most of this fortuitous socio-economic situation.

As the art of printing began with Gutenberg, so the new art of painting – or ars nova – began with Jan van Eyck. His optical revolution surprised not only his contemporaries but also defined a movement in art that continues to inspire artists today. He was not only a modern artist who asserted his authorship by consciously signing each work he created, but also an exceptional character whose work was stamped with his personality. The question that plagued Van Eyck as an artist was: how can I best and most truthfully depict the world as it is?

Since then, every generation of artists has examined that question to provide the most satisfactory answer possible, based on their own insights, contemporary practices and available resources. An important constant in the permanent striving towards mimesis is the relationship between art and science, from the discovery of oil painting techniques in combination with the developments in optics to the emergence of photography, from the development of analogue film to computer animation, from holograms and 3D projection to virtual reality environments and digital image processing.

Van Eyck. An Optical Revolution. Until 30 April at the Museum of Fine Arts in Ghent. www.vaneyck2020.be

Van Eyck Through the Canon’s Eyes