In one and the same performance a naked actor is unable to read his lines due to the physical violence of a colleague and an impeccably turned-out quintet sings classical madrigals to a world-class standard. You may have walked in on a performance by the Amsterdam collective De Warme Winkel (The Hot Shop). Imaginative content, physical extremes and remarkable links and contrasts have made this group a favourite among critics and audiences alike.

De Warme Winkel has existed for almost twenty years. The group has so far put on just fewer than fifty productions, including co-productions. Mara van Vlijmen and Vincent Rietveld were among the original members. They graduated from Maastricht Academy of Dramatic Arts - Rietveld in fact failing to achieve a satisfactory grade in theatre-making. Nevertheless besides being a theatre maker, Van Vlijmen is also active as an instructor. Jeroen de Man joined the collective in 2006 and left in 2016 for Het Nationale Theater in The Hague. Ward Weemhoff has been with them since 2010. This year young talent Florian Myjer has also taken up a place in the group.

Admiration for artists is an important reason for putting on plays, giving rise to a new dramatic genre: the “oeuvre play”. The actors of De Warme Winkel select an artist, read as much as they can about him or her, and take this knowledge to rehearsal, where they work out their ideas, always extending lines of thought to the present day. Anything around the show can play a role. The starting text for the play Gesualdo (2016), about the Italian composer Carlo Gesualdo (1566-1613), was a letter by the director of Het Nederlands Kamerkoor (the Netherlands Chamber Choir) inviting singers to participate in a play. The Italian composer’s unusual, whimsical music, with harmonies ahead of his time, and the sadomasochistic lifestyle of the noble renaissance composer (including the murder of his adulterous wife and an illegitimate baby shuffled into obscurity) united beauty and pain in scenes of horror, humour and music. The aesthetic of the plays varied widely. Tanizaki (2015) took place in a refined world of rice paper, kimonos and subtle social conventions with live koto accompaniment. Jandergrouwnd (2012), about the underground in the era of Soviet censorship of the seventies and eighties, exuberantly raided the second hand shops in the play’s locations. Poëten en bandieten, (Poets and Bandits), a play about Boris Ryhzy, who besides being a poet was also a boxing champion of the steel scrapping district in Yekaterinburg, was made in a deserted machine factory in Rotterdam-Zuid.

How do De Warme Winkel work in concrete terms? “We take people and events from the past, clean them up and dust them down. We hurl them at the canvas of today and examine what the past can mean for us now,” said Vincent Rietveld in an interview.

Once the theme has been chosen, the actors have immersed themselves in it and come up with the first lines and images, all suggestions and ideas are given a chance. The group accepts the ultimate consequence of collective work: the hierarchy of the best idea, whether it comes from a founding member of the group, an intern or a technician. Mistakes are also allowed from time to time, which is a reassuring idea in itself. “Better for things to go wrong once in a while than to play it safe, that’s a kind of code of honour,” said actor Ward Weemhof in Filosofie Magazine. “Over the years I have tried to push the poles further apart – to become more demanding of myself, and take no notice of expectations. The best punk bands also stick to a fixed format.”

Film, dance, singing, anything can serve to imagine the cultural, sociological and historical themes.

The acts that come together to form a play can vary a great deal, from text to mime, sometimes focused on the content, sometimes on the form. The collective draws on all acting styles and dramaturgical possibilities. Film, dance, singing, anything can serve to imagine the cultural, sociological and historical themes. This eclectic approach makes every performance a new adventure. It places significant demands on the creativity and cultural baggage of the theatre makers. Meanwhile the group has come to think more conceptually, although the rehearsal room remains the cradle of every production. It plays a more important role than the director’s drawing board.

In 2017 the group received the prestigious Dutch Theatre Critics Award for De Warme Winkel speelt De Warme Winkel (The Hot Shop Play The Hot Shop, 2016), according to the jury of critics “a genre-binding performance … in which themes such as originality and authenticity, theft and plagiarism, memory and the traditional canon are treated in a joyful, melancholy and deadly serious manner all at the same time.” The performance referred to one of the iconic shows of recent theatre and dance history. For a long time only the company Tanztheater Wuppertal was permitted to perform Pina Bausch’s Café Müller (1978), so this production was particularly about how theatre makers can deal with a milestone of dance. The actors did well with Bausch’s chair ballet, as was shown by the honourable mention which De Warme Winkel received from the dance jury of the Dutch Association of Theatre and Concert Hall Directors, an award for multifaceted work. Nevertheless, as is often the case, the group initially wrestled with many questions as to how to approach their theme – the impossibility of making the show they desired. In the end they themselves emerged through this production. Was De Warme Winkel speelt De Warme Winkel a theatre show about dance or a dance show with elements of theatre? Audience and reviewers could not decide.

The collective is conspicuously open to collaboration with young actors

In Vincent Rietveld gaat voor de Louis d'Or (Vincent Rietveld Goes For the Louis d’Or, 2019) the actor announced that it was high time he won the most important Dutch theatre award. He was opposed by a chorus of young actors, who questioned his ambition in a world with so many real problems. The collective is conspicuously open to collaboration with young actors. Until a couple of years ago De Warme Winkel also took a select club of young people under their wing with the title De Hotshop.

“When there are burning issues, you have to make theatre about them,” Vincent Rietveld believes. So there was no way around it in coronavirus times. Alleen samen (Alone Together, 2020) showcases two things the group is good at: associative thinking and drawing out the consequences of the choices people make. Social distancing necessitated the construction of a special coronavirus-proof theatre, which took the form of 94 private cabins around a circular stage, immediately creating the impression of a peepshow. A peepshow means sex. Yet when someone says coronavirus, there’s no avoiding the medical world. So an act of gratification on a revolving chair is followed by hospital scenes full of steamy references to sex and power and ritual cleansing of a vulnerable body, to the soundtrack of an arrangement of Bach’s Erbarme dich. The predominant colour is white, the light sterile.

For Afscheidstournee (Farewell Tour, 2020), too, radical choices were made. The production draws attention to the threatened state of the world and appeals to us to bid farewell to luxury and waste. For that reason Rietveld and his technician travel by bike to every performance location, sometimes eighty kilometres, with the set in a little cart behind the bike. Recycling is an important theme in the play – in fact including that of their own work. De Warme Winkel takes outspoken positions, but never treats them in a preachy way. Irony is a recurring stylistic tool. Nevertheless some people struggle with the combination of irony and serious themes. Advocates of new sincerity, which prescribes that you should mean what you say, sometimes have difficulty with the elusiveness of De Warme Winkel.

The group highlight difficult subjects with their irony, but immediately put their own role into perspective: who am I to pretend that in two hours of theatre I can have the last word on the world’s problems? “We have outsourced our demons to art,” says Vincent Rietveld. “Art offers catharsis, it cleans up your soul. Just think of Quentin Tarantino, who presents violence in such an over-the-top style that even if it doesn’t lose its danger, it’s easier for us to live with.” 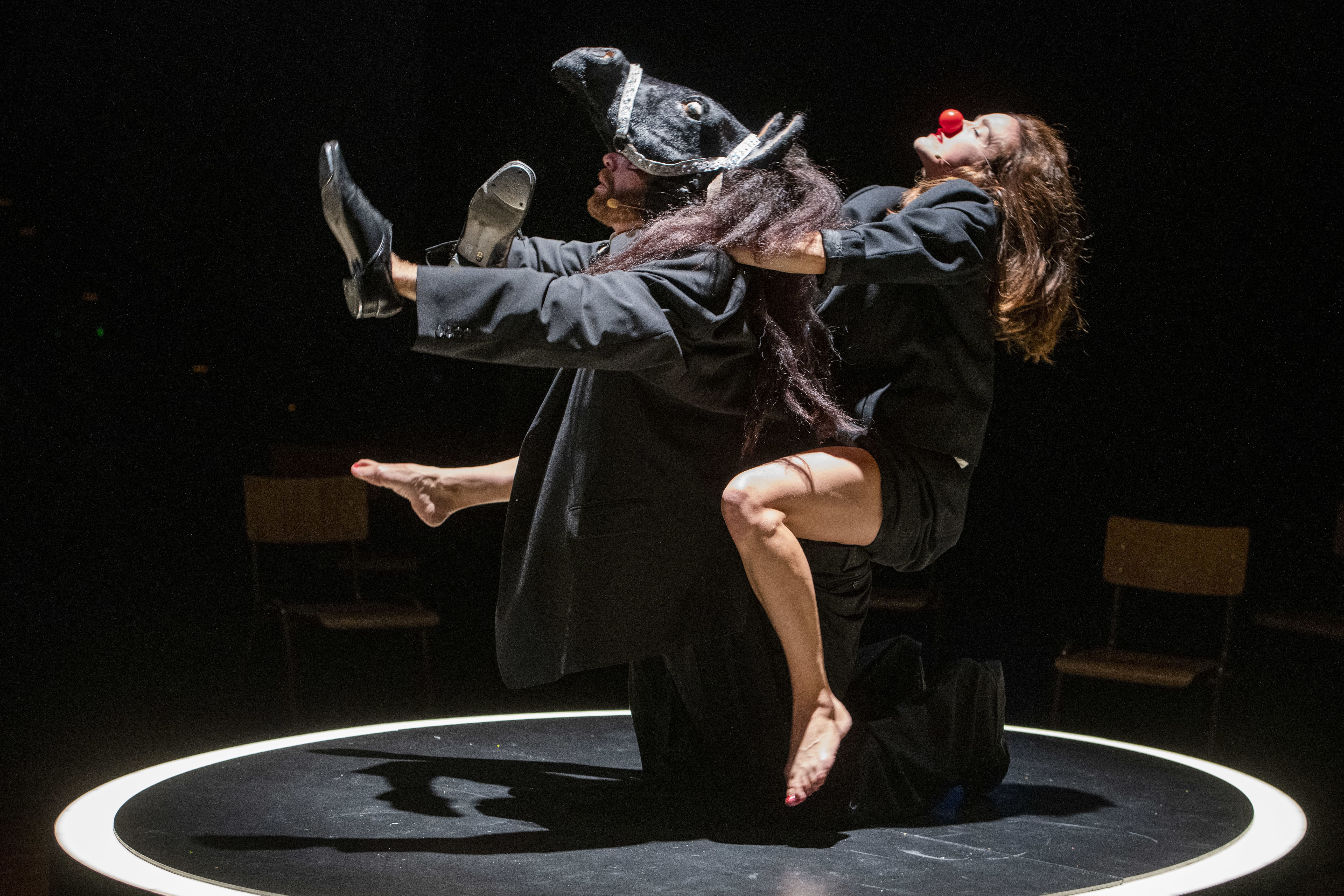 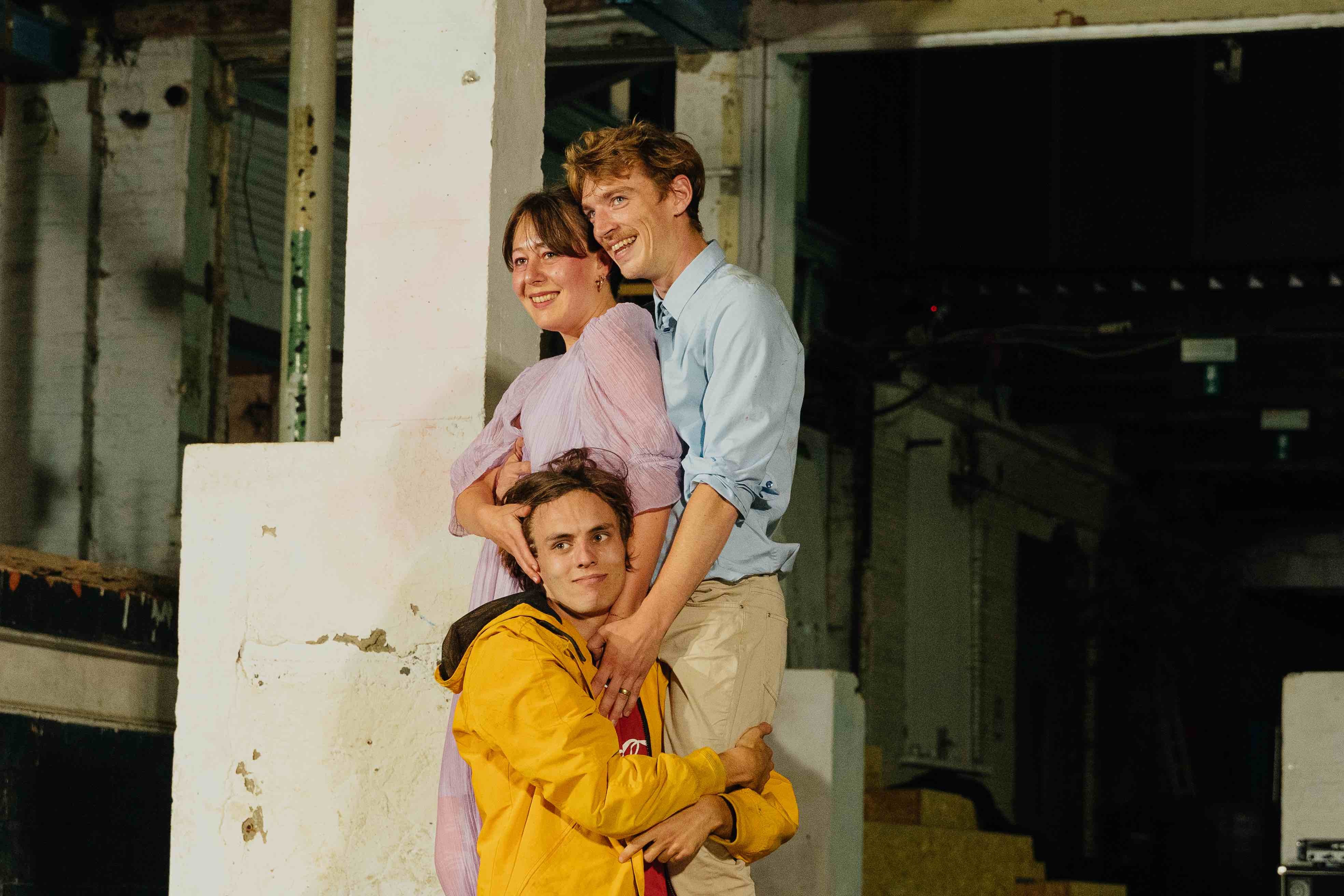