The Dutch photographer Bas Meeuws is continuing the tradition of Golden Age floral still lifes. And those in the canvases of Hans Bollongier (1600-1645) provide the most inspiration. Bollongier painted not just flowers, but tulips, which were very exotic and exclusive in the seventeenth-century Netherlands. Through his carefully composed still lifes, Meeuws demands both respect and admiration for nature.

‘Dutch visual artists do not forget their forebears in art history.’ That is what Italian photographer and photo curator Martino Marangoni once said to Maartje van den Heuvel, curator of a collection of exceptional photographs at the University of Leiden. Van den Heuvel: ‘In the conversation that followed, I learned that Dutch artists are very observative, that they have a good sense of balance in compositions where there is also room for space and stillness, that they have a good eye for light and that they attend carefully to the technical aspects of their works.’ 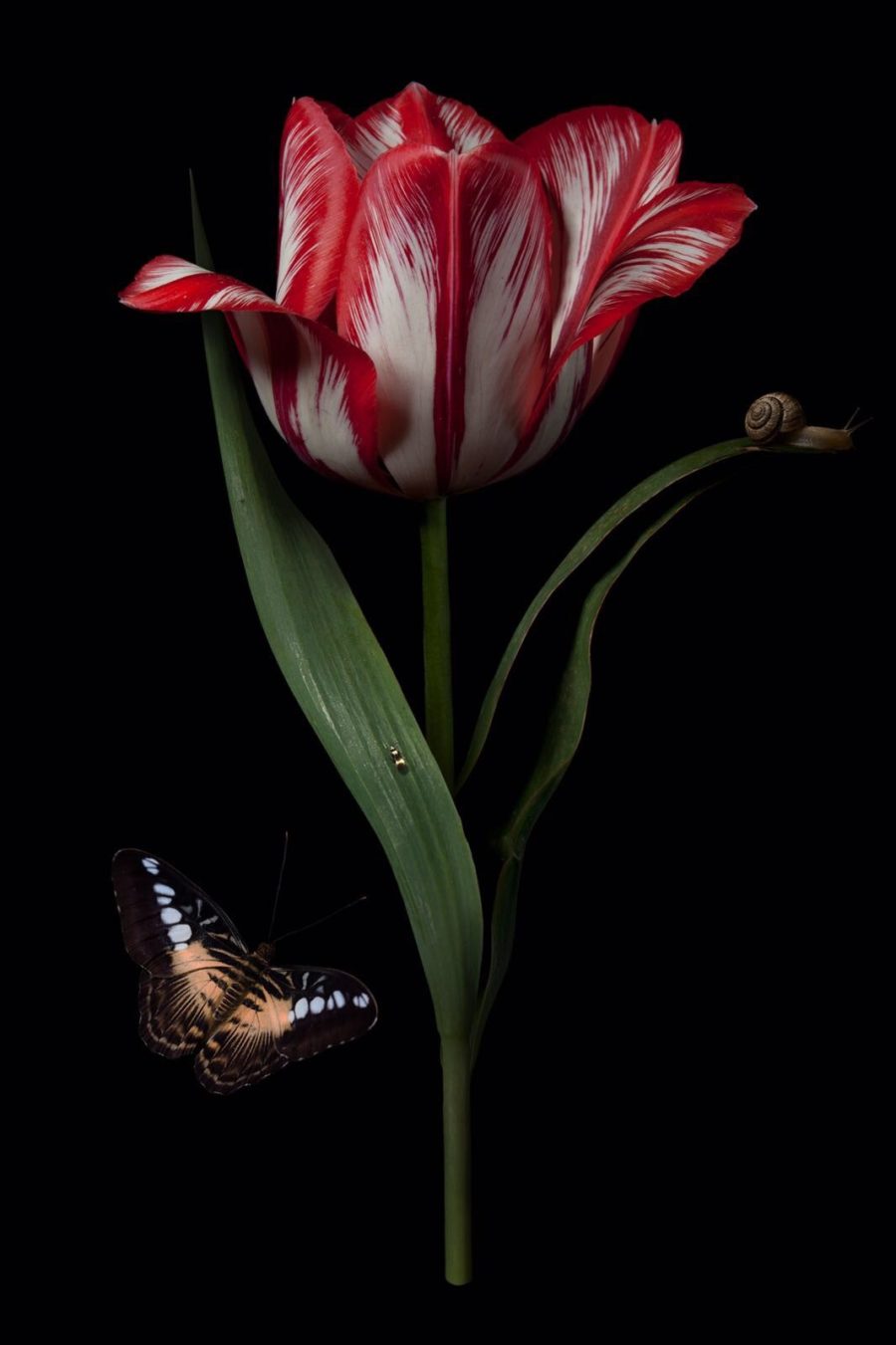 My present-day interpretations of seventeenth-century floral still lifes are all about the lust for observation and my eye for detail. Creating a sense of wonder was very important in the painting of floral still lifes in the Golden Age. Decorative flowers such as tulips are completely normal today and can be found in every garden centre and florist shop, but to the seventeenth-century Dutch viewer, a tulip was an incredibly exotic flower that had only recently been imported into the Netherlands from Islamic Turkey by way of Italy. The seventeenth-century Dutchman was undoubtedly agog at seeing the unknown and unprecedentedly beautiful colours and shapes of those flowers. I want my work to bring back that same sense of wonder. 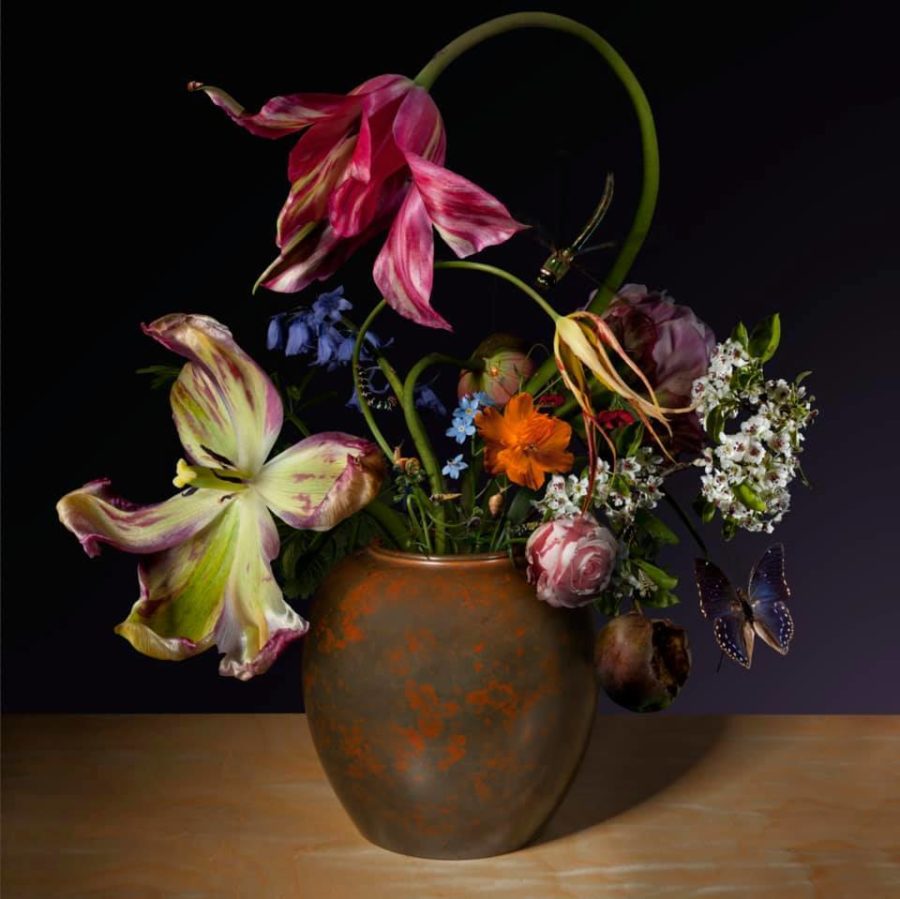 Floral still lifes haven’t always been my thing. I am self-taught and up until 2010 was, in the broadest sense, mainly a very enthusiastic hobby photographer who documented his life. Inspired by fellow amateur photographers and my girlfriend at the art academy, I developed my talents as both a photographer and an observer. My earlier work consists of all different types of still lifes that I set up in the living room under a set of builders’ lamps (once the kids were in bed).

Along the way, paintings of floral still lifes began to attract my attention and I became fascinated by them. The paintings of Jan Davidsz de Heem (1606-1684), Ambrosius Bosschaert (1573-1621) and Daniel Seghers (1590-1661), amongst others, really attracted my attention. In the Mauritshuis Museum in The Hague I was particularly struck by Flowers in a Wan-Li Vase and Seashells by Balthasar van der Ast (1593-1657) and in the Rijksmuseum in Amsterdam it was Still Life with Flowers (1639) by Hans Bollongier (1600-1645) that got my attention.

Talking about tulips and the bursting of a bubble

I remember the first time I saw Bollongier’s actual Still Life with Flowers in the Rijksmuseum, in 2010. It was smaller than I had expected and, due to major building works at the museum, it was hanging in the Philips Wing, in an exhibition of highlights from the extensive collection. First, I observed it from a distance and was touched by its softness and seemingly monochromatic colour palette. 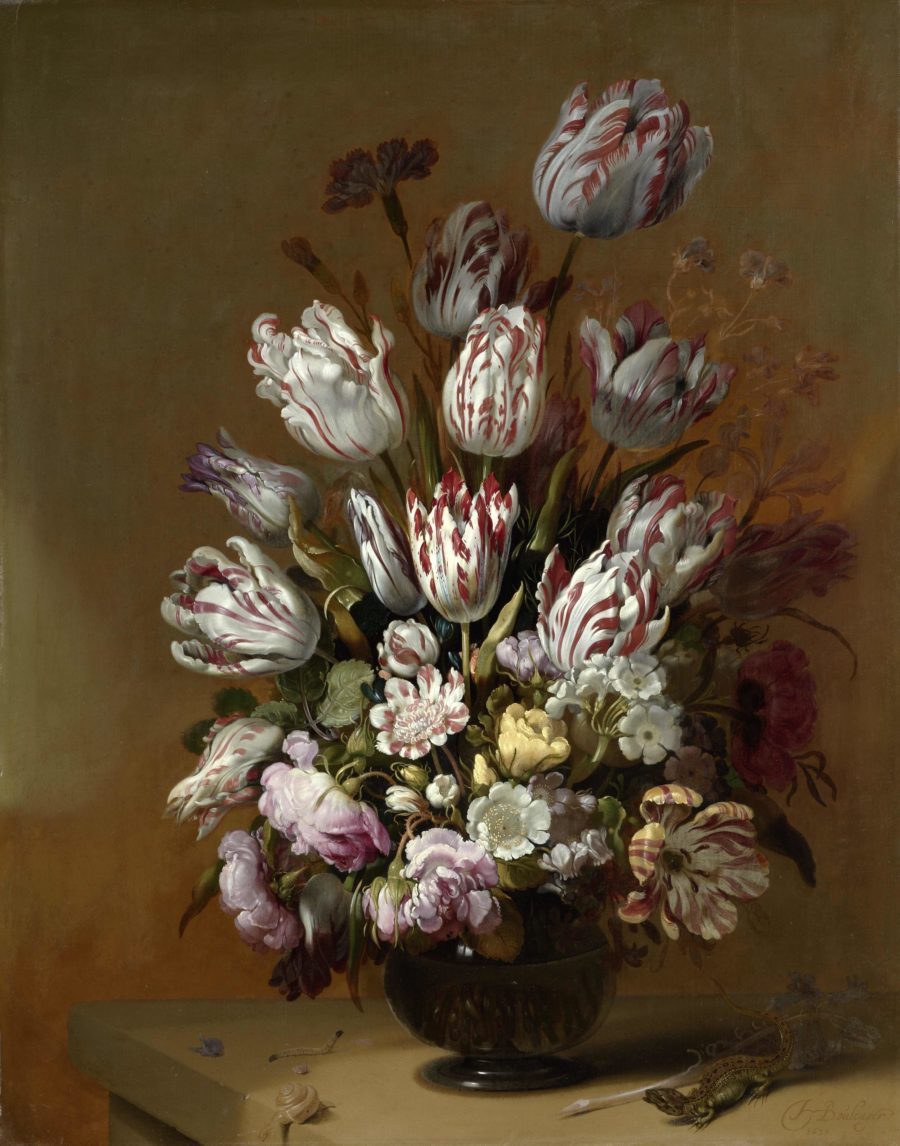 I could not really believe that it would have been possible for such a large quantity of tulips to have been gathered in one vase when those flowers were so precious at the time that it was possible to buy a canal house in Amsterdam for the price of one tulip bulb.

I saw that there were more colours used than just shades of beige, yellow, white and red (there were even tiny bits of blue in the central tulip). Finally, with my face nearly pressed against the painting, the brush strokes became noticeable; the sparkle, the finesse with which the texture and detail of, for example, the stamens and hairs on a stem were depicted, the reflections on the vase, the cut stems on the table. 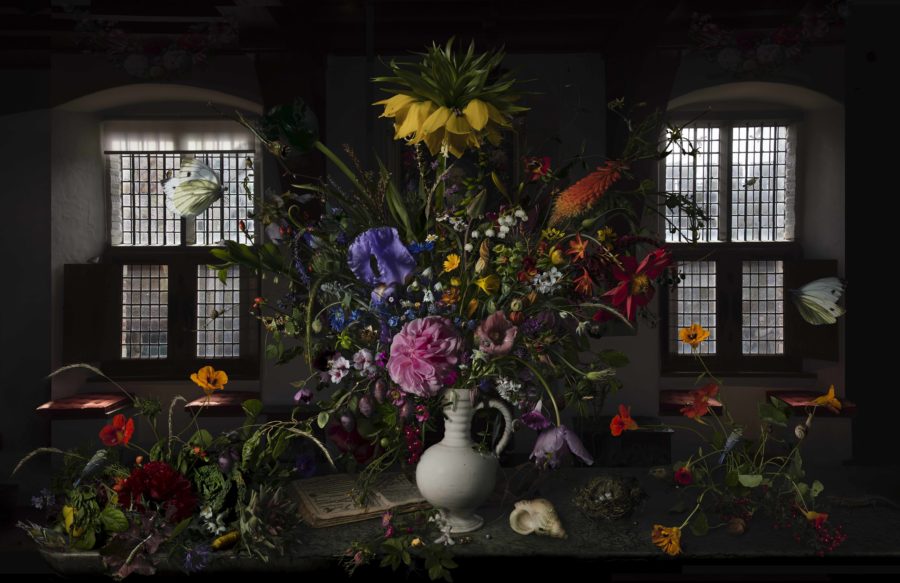 Hans Bollongier was primarily known for his floral arrangements, in which tulips took pride of place. The Dutch painters often chose to use tulips as the most prominent flowers on their canvases, a choice that was influenced by the immense popularity of the tulip in the 30s of the Golden Age amongst merchants and collectors. Tulips were also often painted with watercolours and these works served as a kind of catalogue allowing buyers to see what they might expect from the tulip bulbs they had purchased.

The tulip market encouraged widespread speculation which eventually led to the bursting of the economic bubble. That was the end of the tulip mania (1635-1637) and also the first crash of the financial market. But it certainly did not signal the end of people’s interest in tulips.

Still Life with Flowers was painted in 1639, just two years after the crash. The popularity of tulips did not decrease due to this catastrophe, rather the opposite. It was only the price that fell. Tulips would continue to be a central feature of paintings until well into the eighteenth century.

However expensive and exotic tulips might have been in the past, they are completely commonplace today. In 2020 it is possible to buy a bunch of tulips looking just as they used to for about two or three euro in the supermarket. Yet, due to increasing urbanization and the feeling that everything can be made, achieved, managed and influenced by man, the person buying those tulips today has, in my opinion, become increasingly separated from nature. We’re so evolved and specialised that some people, for example, do not even know that milk comes from cows. Who knows anymore what a head of lettuce looks like when we can only buy washed and cut leaves in a plastic bag? 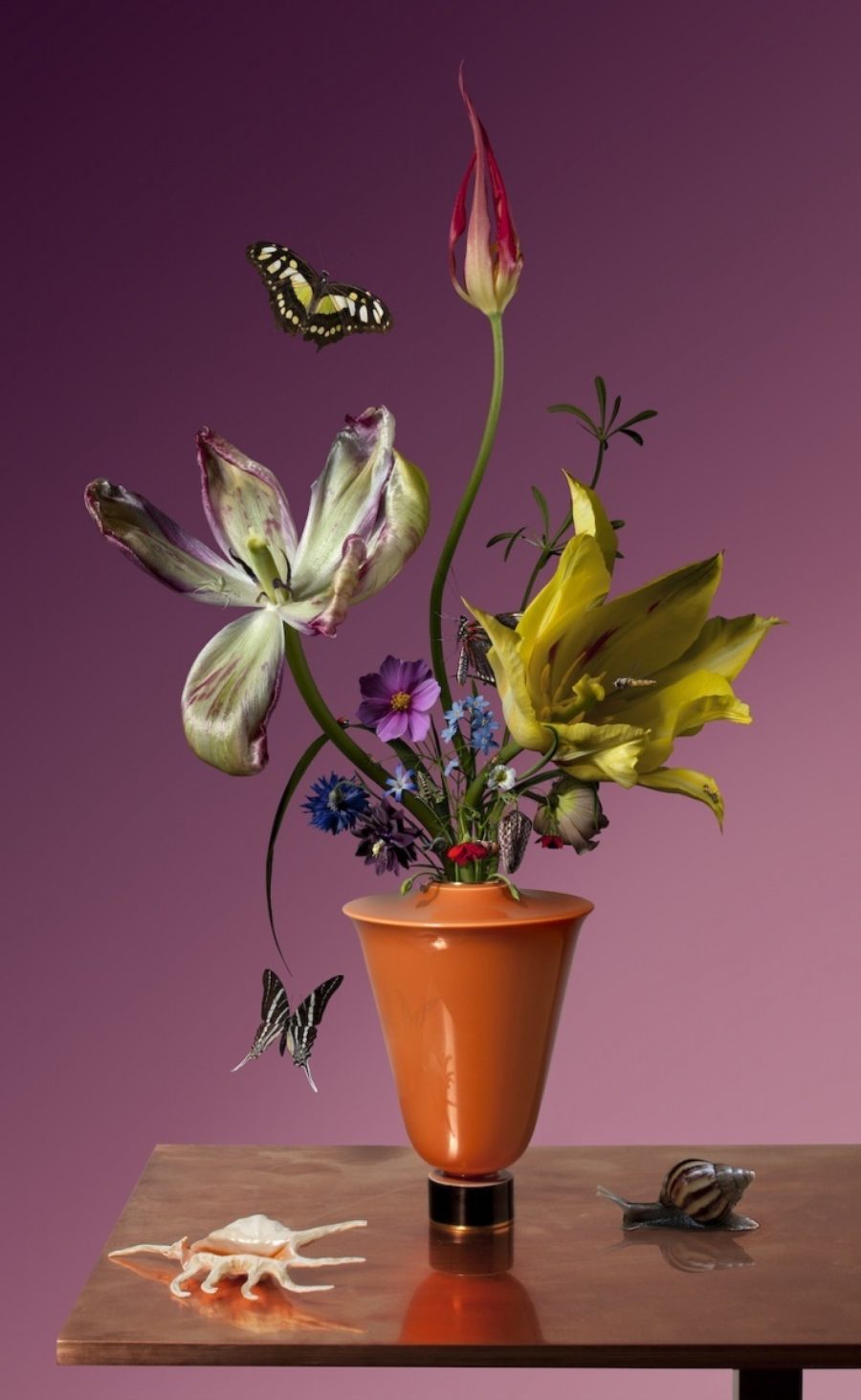 With my photographic still lifes, I want to ensure that viewers develop more respect for what nature has to offer. For that reason, my work depicts some weeds alongside the beautiful roses and tulips; simple wild plants that grow along the shoulder of the road or in cracks in the pavement, flowers that everyone blissfully ignores. Many edible leaves and flowers, such as the leaves of cabbages, are visually attractive (whether fresh or past their sell-by date).

The Sweet Springtime is a work I did on commission for the Rijksmuseum in Muiderslot (a castle near Amsterdam). It is composed of flowers, plants, insects and other animals from the garden of the castle that I catalogued over a whole year. The interior, the tables, vase and windows are original to Muiderslot.