On the Road With Armchair Voyager Rinus Van de Velde

Too famous now to still be considered the rising star of Flemish art, Rinus Van de Velde brings a selection of his latest work to the high-profile show Inner Travels at Bozar in Brussels.

The first piece in Inner Travels is a train. It looks like an ordinary electric train, the kind that stops at every suburban station between Brussels, say, and Leuven, where Van de Velde was born in 1983. You meet the train head-on, caught in its headlights, which shine through a colonnade into the exhibition vestibule.

This is Prop, Train (2021), a life-sized re-creation in cardboard, wood and other materials. It is extremely realistic, the only giveaway at a distance the way the plastic sheet standing in for windows ripples when anyone climbs on board. Inside the train, there is trash in the bins, cigarette butts in the ashtrays, and a sheepskin coat and a Walkman on one of the empty seats.

Prop, Train is both a key to the exhibition and a huge red herring. To deal with the deception first: Inner Travels is part of Europalia, an arts festival that takes place across Belgium every two years. Usually, it picks a single country to focus on, but for this edition, it has taken on the broader theme of Trains & Tracks. It seems that Prop, Train was commissioned for the exhibition, and it ticks the thematic box so decisively that there appears to be no need to return to it. The only other railway connection in the show is a large drawing of two grown men lying on the floor and playing with a model train set. 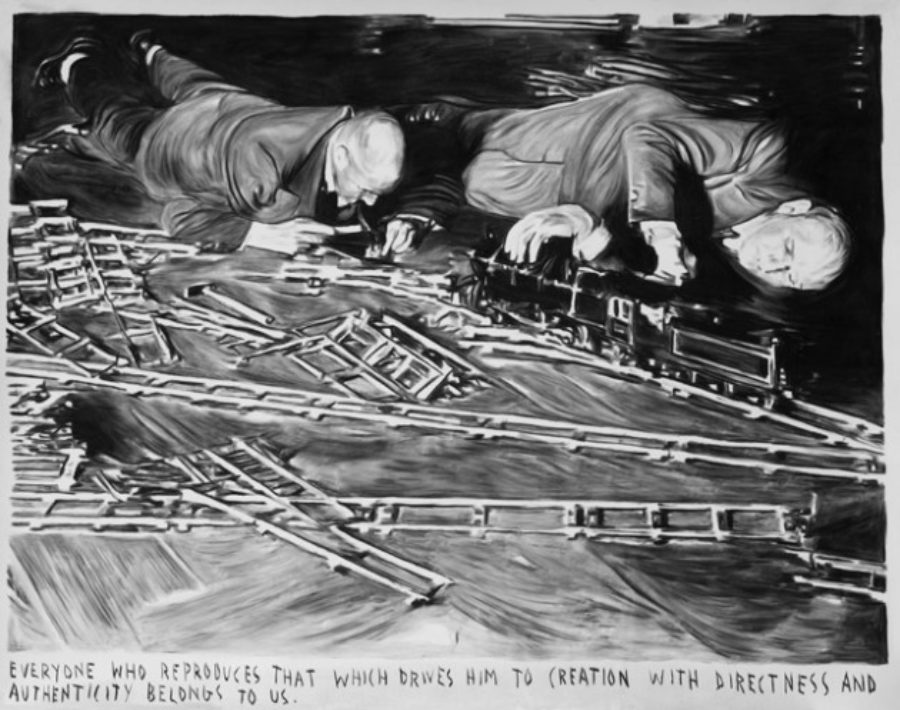 Everyone who reproduces that which drives him to creation with directness and authenticity belongs to us, 2010, charcoal on paper, 190 x 240 cm © Tim Van Laere Gallery, Antwerp

This is the style of artwork that most people associate with Van de Velde: large figurative drawings in charcoal, each with an enigmatic handwritten text running along the bottom of the paper. In the case of this 2010 work, the oldest in the exhibition, the text runs: “Everyone who reproduces that which drives him to creation with directness and authenticity belongs to us”. The drawing is part of a series that imagines a friendship between Van de Velde and the Soviet artist Vladimir Mayakovsky, although the text turns out to be from the German expressionist painter Ernst Ludwig Kirchner.

Imagined autobiography is also typical of Van de Velde’s work, a way of escaping the monotony of his real life and exploring his relationship with the art world, history, or just about anything outside the studio, where he says he spends most of his time. His status as an imaginary traveller is also invoked by the curators of Inner Travels as a further link to the theme of Trains & Tracks.

Prop, Train is a key to the exhibition because it allows us to step physically into Van de Velde’s world, a through-the-looking-glass moment that just seems quirky at the time, but which pays off later on. As you move through the exhibition you meet other props – a cardboard backpack, a full-sized car, the elements of a jungle scene with aircraft wreckage, and finally a machine that fills an entire room. This is all rather baffling until you see La Ruta Natural (2019-21), a 13-minute film in which most of these props are used. 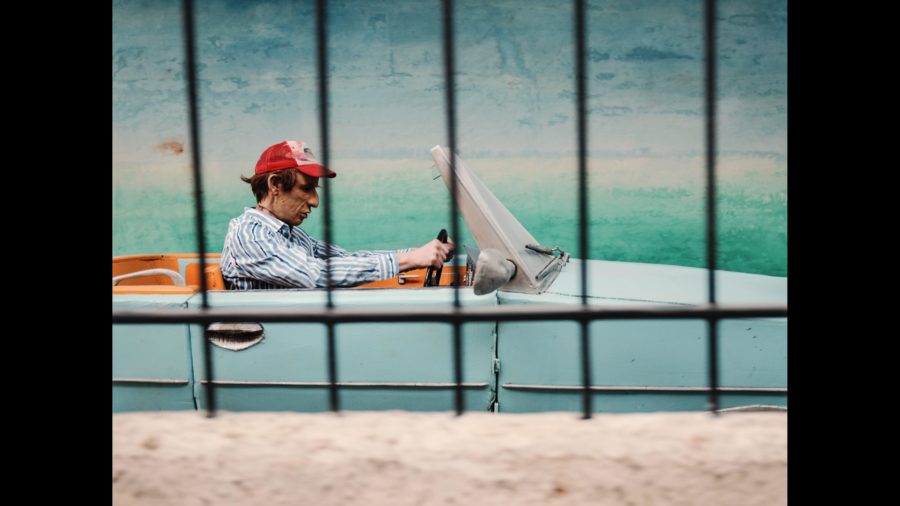 In the film, a man wearing a rubber Rinus Van de Velde mask moves purposefully through a series of scenes connected by the kind of dream logic that allows you to step through TV screens and unlock trapdoors with a carrot. He drives the car, both the full-sized prop and a miniature on a model mountain that also appears as an exhibit. And he uses the large machine to complete a task. The film is playful, in a David Lynch, neo-noir way, and feels like an extension of Van de Velde’s drawings. This is not so surprising when you know that the drawings are often based on photographs taken on sets built in Van de Velde’s studio.

But something interesting happens when you go back to look again at the props. The room-filling machine, which appeared blandly generic and with no clear purpose when you first saw it, suddenly has meaning. The effect is strangely intense, and echoes the moment you boarded the prop train at the beginning of the exhibition. Just by stepping on board, you create the beginning of a narrative, just enough to give the prop meaning. 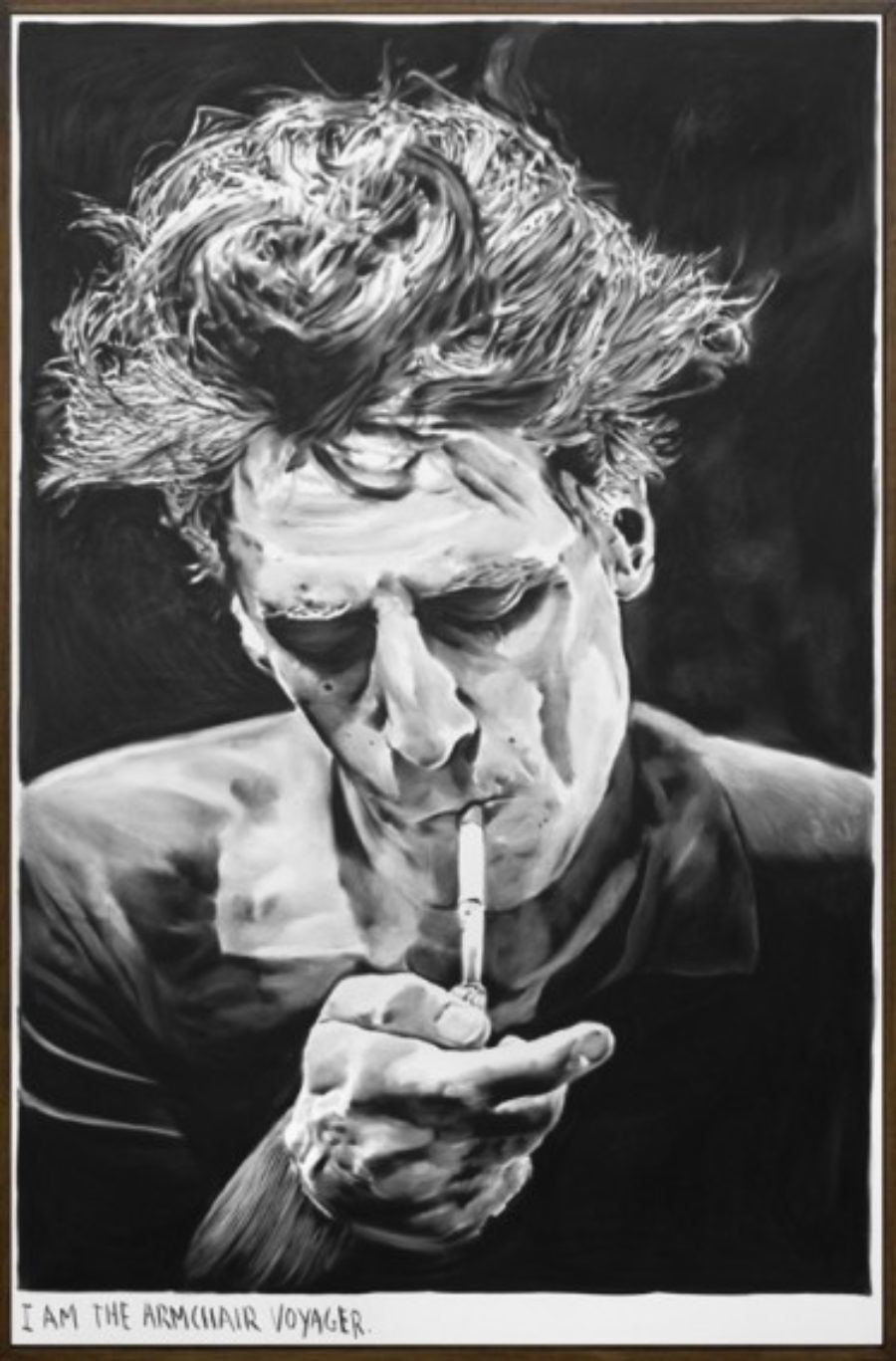 This change in perception is a far more interesting experience than the main thrust of the exhibition, which is to pair Van de Velde’s work with various ‘travelling companions’, artists he reflects or references in his drawings, assemblages, and ceramic dioramas. For example, since the large charcoal self-portrait I am the armchair voyager (2020) takes its text from the American artist Joseph Cornell, it is paired with one of Cornell’s ‘shadow boxes’, a small display case filled with found objects and magazine clippings. Similarly, colour drawings by Van de Velde humorously exploring his feelings about plein-air painting are flanked with work by Claude Monet and Pierre Bonnard. And so on. 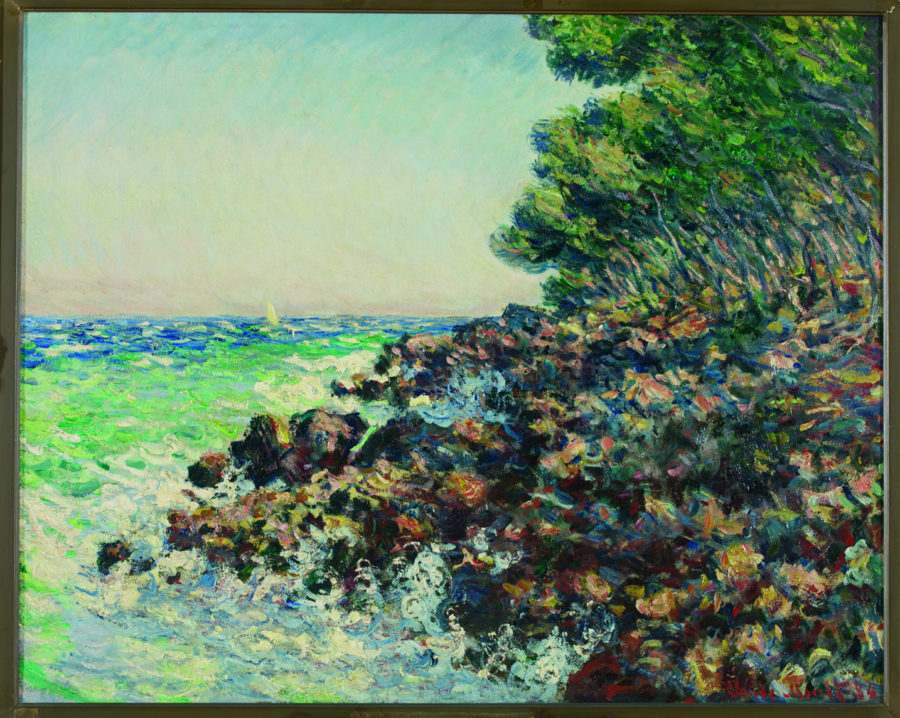 This approach is not very satisfying, and to my mind misses one of the strengths of Van de Velde’s work, which is that his images are self-contained. He is not reaching out to art history, but drawing it in. If he wants to make a strong reference to another artist, he makes it, and it is there on the paper. He has been drifting around... (2021), for example, is a virtual copy of Rembrandt’s early self-portrait with his face in shadow, and needs no help from the outside. 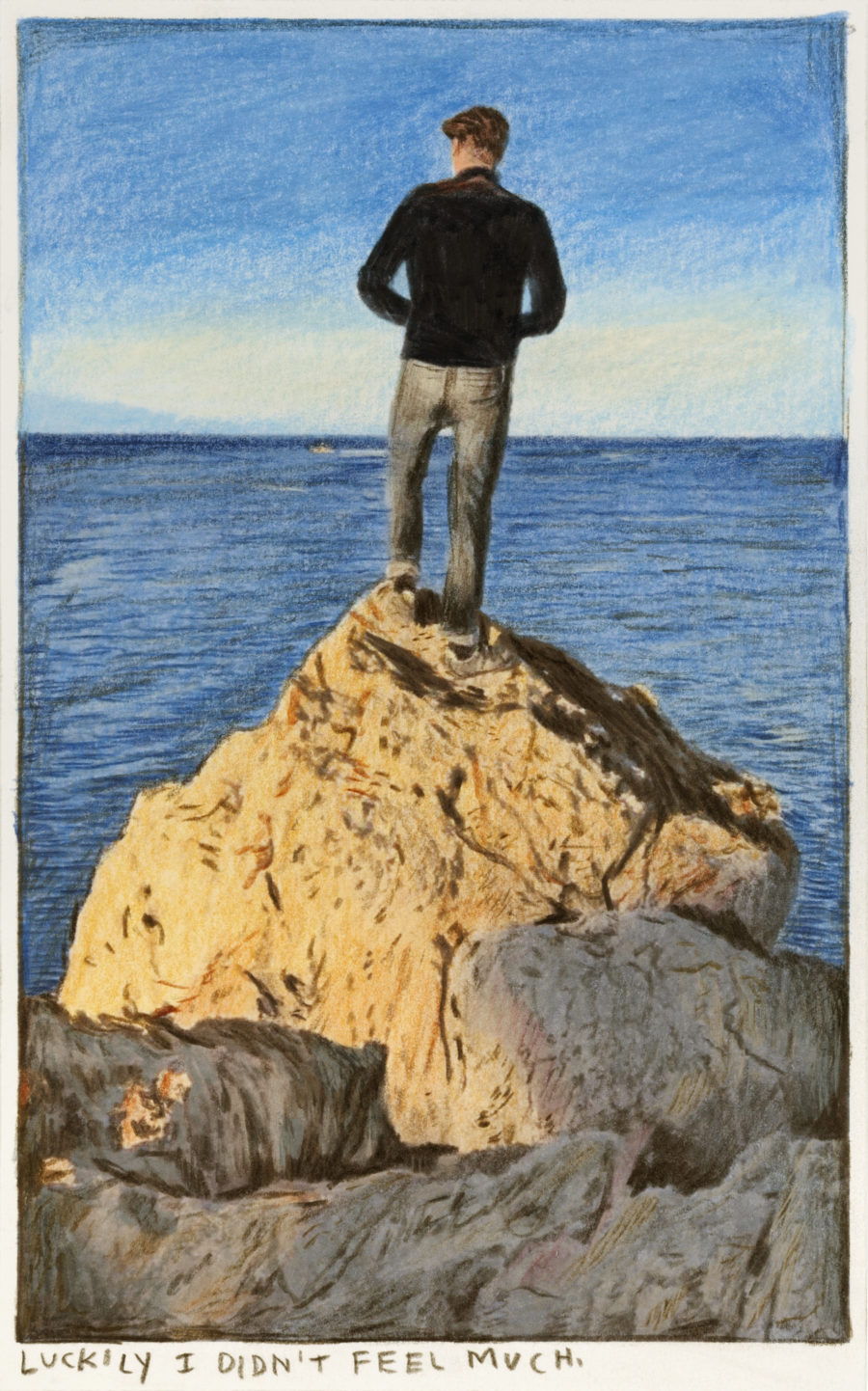 At other times the nod may be more oblique, as in Luckily I didn’t feel much (2019), a small colour pencil drawing of a man standing on a rock and looking out to sea, which feels both like Caspar David Friedrich’s Wanderer above the Sea of Fog and a 1960s Polaroid found in a junk shop. Incidentally, this relatively recent move into colour provides some of the exhibition’s most interesting moments. And even when the reference is too obscure, or passes you by, the mysterious conjunction of image and text in Van de Velde’s work can open up a door, beyond which your own inner travels begin.

The exhibition is accompanied by a trilingual book, published by Hannibal Books.