According to DutchCulture, Dutch cultural export to Belgium remains high. The proximity, shared language and history make it easy for Dutch artists to find their way to their neighbour.

Only the eastern neighbour, Germany, and the United States have hosted more Dutch cultural activities in 2018 than Belgium. However, when comparing the size of these countries, it is clear that the scale of cultural cooperation with Belgium is unique. So let’s take a closer look at the numbers for 2018.

Where do the Dutch go and what type of exchanges do we see? 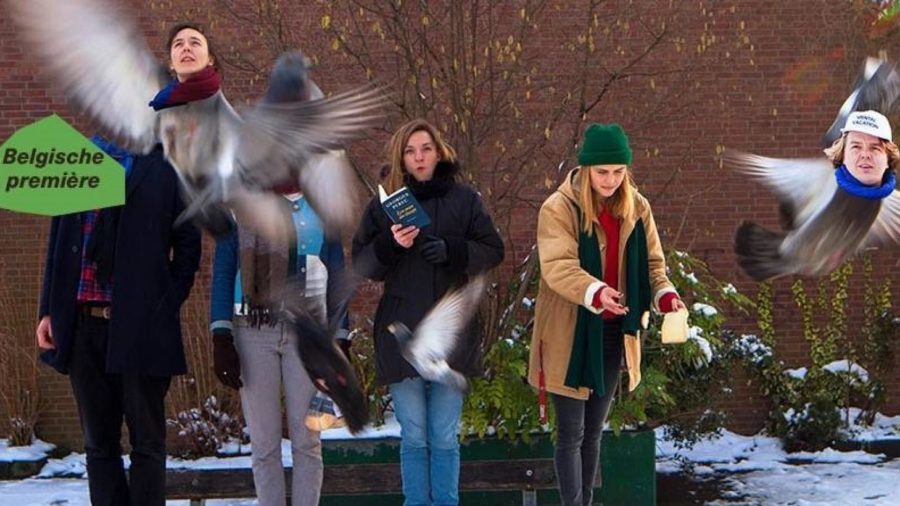 When looking at where the activities take place - the geographical distribution - we see there is more to the story of the successful cultural cooperation with Belgium. That is, Belgium is actually a complex country that splits into two regions along the French-Dutch language barrier. As we can see in the figure below, Dutch artists are incredibly active in the Dutch-speaking region of Flanders (the Northern provinces), whilst they scarcely visit the French-speaking region of Walloon (the Southern provinces). Obviously, the fact that Flanders and the Netherlands share the same language contributes to a large degree to the intensity of this cultural exchange. 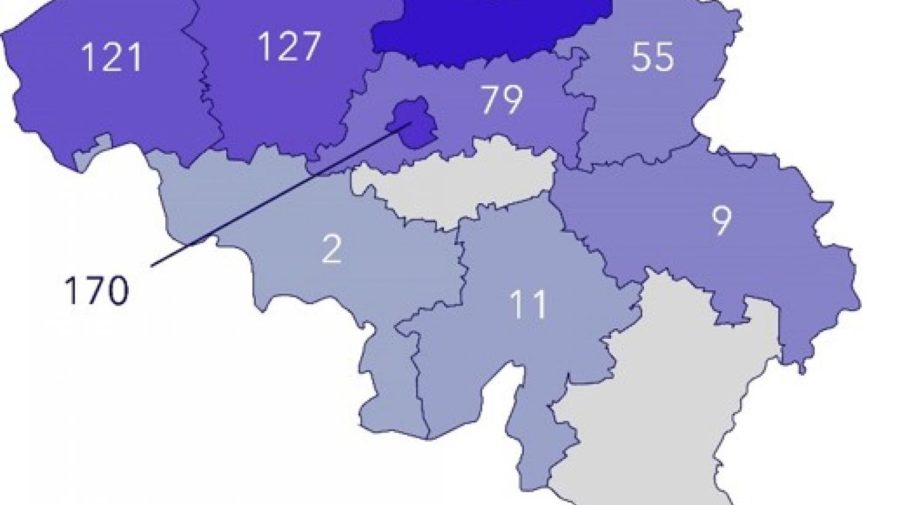 Distribution of events across regions

Considering which discipline travels to Belgium, we see a dominance for performing arts (theatre) and music, together worth a whopping 81% of the total exchange. The top 10 of frequent travellers are mostly theatre groups. The fertile ground for Dutch-spoken theatre could explain the large presence of this art-form in Belgium. The dominance in music could be explained by the large music festivals Belgium has, such as Tomorrowland, Boom and Extrema Outdoor, where the Dutch music-scene is well represented. However, this article on Dutch-Belgian music exchange shows that this explanation neglects the complicity of working internationally in the music sector.

The percentage that theatre and music take up in the totality of activities is exactly the same as in 2017, as is the relative share for visual arts. In the smaller disciplines, we see no significant changes either, confirming Belgium's status as a steady and consistent cultural partner for the Dutch cultural sector. The fact that Belgium is close by and that we have that shared language provide for long-standing cultural ties between the two countries. 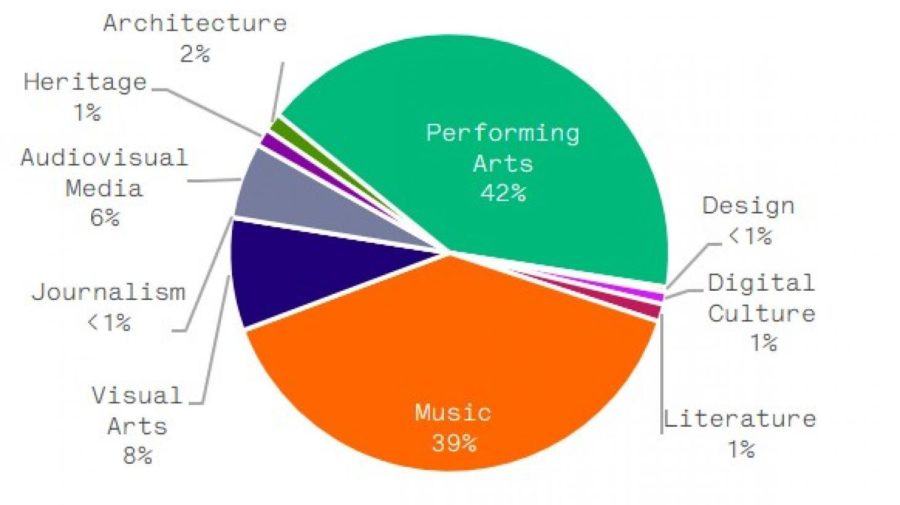 Events per discipline in percentages

The cities in which most Dutch activities are found are all located in Flanders, with Antwerp far ahead of the others. Brussels, the number 2, forms an exception here. Although Brussels is in the Flemish-Brabant province and therefore in Flanders, the capital city of Belgium has a distinctive status within the country. First of all, it has its own government and secondly it is bilingual (though the French-speakers form a slight majority). It is also the first city in Europe in which inhabitants with immigrant-backgrounds outnumber 'native' inhabitants. This makes Brussels an interesting melting pot of cultures where one identifies foremost as ‘Brusselaar’. Without even crossing its urban borders, Brussels is thus very international and it seems like the place to be in Europe for exciting new forms of creation. 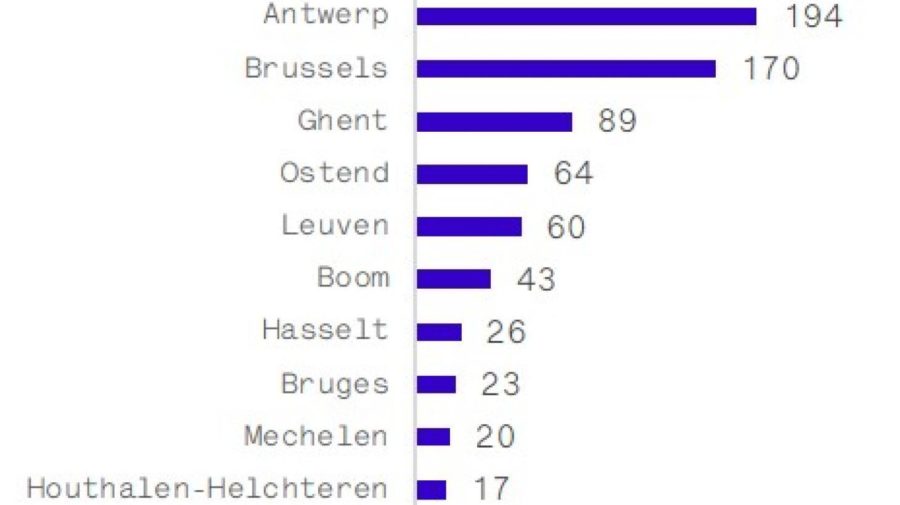 In conclusion, we can say that no major changes have occurred in the cultural exchange between Belgium and the Netherlands from 2017 to 2018. Belgium is thus a secure country for Dutch artist to make the first step in their international career. It is no surprise either, that music, theatre and visual arts take up 90% of the total of Dutch activities in Belgium, as the Dutch multi-annual strategy for Belgium of the Dutch Embassy in Brussels and the Dutch cultural funds focusses on those three disciplines.

However, for 2019 this might shift, as currently, the Dutch Embassy in Brussels is working on a Dutch focus programme in Belgium this fall. This multi-disciplinary program could impact the number of activities and the kind of exchange. The Kikk festival in Namur is, for example, part of the programme, since the Dutch Embassy especially wishes to focus more on Dutch-Walloon cooperation.

Next to that, DutchCulture and Flemish Arts Centre de Brakke Grond are working on an inventory trajectory on Dutch-Flemish cooperation called OverBruggen. Focusing on what goes well and what could be better, the kick- off of the trajectory was held on June 26th in de Brakke Grond, Amsterdam.

Check out the complete overview of Dutch cultural activities in Belgium in our database.

If you are a cultural professional who wants to go to Belgium, feel free to contact Lisa Grob, advisor Belgium at DutchCulture.

For funding possibilities, check out the Cultural Mobility Funding Guide or the websites of Mondriaan Fonds, Het Nieuwe Instituut, Fonds Podiumkunsten and the Dutch Embassy in Brussels. Information about international promotion in the performing arts can be found on the website of Dutch Performing Arts.