Charles V, the Man Who Bought the Emperorship

Exactly 500 years ago on 23 October, Charles V was crowned Holy Roman Emperor, much to his French rival Francis I’s chagrin. Charles’ coronation marked the beginning of a long series of conflicts between – what were then considered – the ultimate European superpowers. On 22 October 1520, an impressive procession of noblemen rode into the city of Aachen. The parade was so elaborate it took almost five hours for every aristocrat to arrive in the city. The procession included regent of the Netherlands Margaret of Austria as well as a whole slew of bishops, princes, dukes and counts, e.g. the Prince of Orange, the Counts of Egmont and Horn, and various Spanish lords. All of them accompanied Charles of Habsburg, who, the following day, would be crowned Holy Roman Emperor by three bishops in the Aachen Cathedral.

The Holy Roman Empire was a political union of both secular and ecclesiastical territories connected to the Roman-German Emperor. This title wasn’t hereditary – rather, the Emperor would be elected by seven prince-electors. To truly become Emperor, one had to be crowned by the pope. The Holy Roman Empire was called ‘Roman’ as it was considered the successor of the Roman Empire, and ‘Holy’ due to its links with the church. In reality, the Empire lacked true unity; it was simply too divided, politically, culturally and even religiously.

On 12 January 1519, Maximilian of Austria, Charles’ grandfather, died. Maximilian had already been preparing his grandson to succeed him as Emperor for a while. However, a few competitors had also set their sights on the crown. Henry VIII of England was quick to abandon his dream, but Francis I, king of France, stubbornly continued to pursue the title of Holy Roman Emperor. One could be crowned emperor by bribing the seven prince-electors. In their attempts to do so, both protagonists were forced to dig deep into their pockets. Only after having paid enormous bribes to the electors, cunning Charles was able to get a hold of the crown. Throughout his attempts, he received strong support from the Fugger family of Augsburg, one of the wealthiest families around at the time. They lent Charles huge sums of money in exchange for control of various silver mines, and – obviously – direct access to those in power. After the coronation, members of the Fugger family would regularly remind Charles of the fact that they helped him gain the crown.

Interestingly, the prince-electors opted for Charles for other reasons besides his money. Pope Leo supported Francis’ candidacy, as he was concerned that Charles, who already owned territories near the Vatican, was becoming too much of a threat. The people, however, were fiercely opposed against French King Francis I. He sought an alliance with English King Henry VIII, whom he invited to the Field of Cloth of Gold near Calais. This meeting turned out to be in vain, for Henry left Calais and went straight to Charles, with whom he came to an arrangement. After the coronation on 23 October, a long-running series of conflicts broke out between the French monarch and the Habsburg king. In 1525, King Francis was defeated and captured after the Battle of Pavia. In 1526, he was forced to sign the rather humiliating Treaty of Madrid. As soon as he arrived back home, however, he dismissed all previously made agreements and continued to wage war. These conflicts would continue long after both royals’ deaths. It wasn’t until 24 February 1530 that Charles V was crowned emperor by Pope Clement VII in Bologna. He would become the last Holy Roman Emperor to receive a papal coronation with the traditional Iron Crown. You can discover a replica of this extraordinary crown, as well as – among other things – his coronation robe, at the exhibition entitled The Purchased Emperor – Charles V's Coronation and a Changing World in Aachen.

This exhibit also focuses on Charles’ childhood and upbringing in the Netherlands (he was born in Ghent) and demonstrates how the first global empire started to show clear signs of decline. The time-honoured view of the world was slowly falling apart. 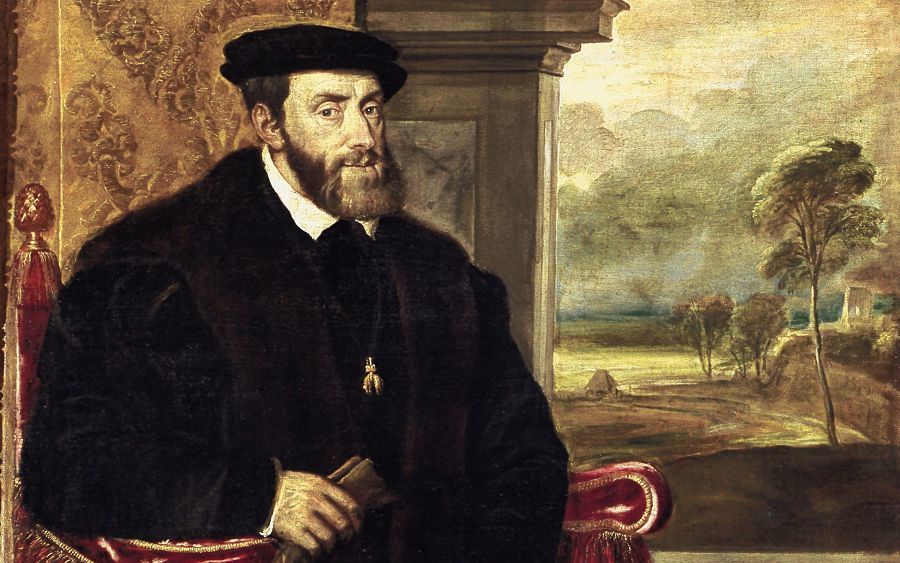