Cultural Attaché Beate Gerlings in Berlin: ‘Germany is a Candyland for Everyone Active in the Cultural Field’

The Cultural Attaché is a series of interviews by DutchCulture, the Dutch network and knowledge organisation for international cultural cooperation, with cultural attachés of the Netherlands. How do these attachés help Dutch art and culture? What were their expectations when they were posted abroad, and what challenges have they faced? This edition: Beate Gerlings in Berlin.

Beate, you are more than a year into your posting as cultural attaché in Berlin. Can you tell us something about your expectations beforehand, were they met?
Beate Gerlings: ‘I already have a few cultural postings behind my belt, years ago at the policy unit within the Ministery of Foreign Affairs and on secondment as deputy director to DutchCulture from 2008-2010. Before that I gained international experience outside of the cultural field, before joining the MFA, working in South-Africa and with Doctors Without Borders, and at the Ministry’s Africa Department.

Anyway, after having been engaged in International Policy from those perspectives, I was eager to also do a stint at an embassy, and get involved in the implementation side of the International Cultural Policy. And it has been, as I expected, great to renew my acquaintance with the cultural field in the Netherlands and to dive into the great unknown of German arts and culture. I loved the policy making side of things, but I’m now thoroughly enjoying the more practical trade of cultural diplomacy.’

Germany is not just Berlin! There are amazing opportunities in other parts of Germany as well

So, you were well prepared for the cultural attaché position, and then you were chosen for the Dutch Embassy in Berlin. How did you feel about working at that post and moving to Berlin?
‘Berlin is of course the jackpot for a cultural attaché, because you are in the most relevant country for the Netherlands when it comes to internationalisation in culture, as it is the biggest market for Dutch artists who are looking beyond the Dutch borders. And of course, Germany as Kulturnation, as country of thinkers and poets where culture is an important part of life and of society, is a Candyland for everyone active in the cultural field.

Throughout my career, I have always stood with my back to Germany, like more Dutch people, and have always been more Anglo-Saxon oriented. Fortunately, I had the time to prepare well and to improve my German as well as my knowledge of the country. Learning the language is crucial in gaining a real understanding of a country and its people, and I feel privileged to have had the opportunity to make such an in-depth investment.’

Rembrandt’s Strich in Kupferstich Kabinet Dresden. Rembrandt as a source of inspiration for other artists, amongst others Marlene Dumas and Willem de Rooij. The exhibition ran from the 14th of June until the 15th of September 2019.

Were there any concrete projects that you started working with, when you began your position?
‘I really have the advantage of a strong team with very good people, some of whom have been there for many years. They have been steadily expanding their knowledge and building their network and are working very strategically. In that sense I also stand on the shoulders of my predecessors. I see how everyone has added something to the presence and visibility of Dutch arts and culture in Germany.

I try not to think in terms of projects, and more in terms of our strategic objectives and added value. More than in specific projects, this lies in our daily craftsmanship: cleverly using our networks, identifying opportunities, stimulating the German side with ideas and tempting them to look towards the Netherlands for their programmes. And on the Dutch side, providing information and insight. I believe strongly in creating demand by organising for people to have the knowledge and the networks to work together.’

Have you been able to build new relationships, or identify chances for the Dutch cultural field?
‘The very active commitment to the Kunstverein network for Visual Arts, is really starting to pay off. The typical German phenomenon Kunstvereine offers a unique prospect for Dutch artists as an intermediate step towards museum exhibitions. We organise a lot of curator visits to the Netherlands, and now also work together with the Mondriaan fund to achieve more institutional partnerships between Kunstvereinen in Germany and Visual Arts institutions in the Netherlands.

I think that this long-term approach is well suited to the German context; to not jump too much from one opportunity to the next and instead be a very reliable, recognizable partner. We have also been building very steadily on another priority discipline: literature. In 2016, the Netherlands was Gastland at the Frankfurter Buchmesse, we worked towards that for years and the effect on the interest in Dutch literature and the number of translations is still visible. We are now looking into scaling up our presence and visibility at the Leipziger Buchmesse and the wonderful Leipzig Liest festival, which is more geared towards the public.’

I think it's very interesting that you say, it's not about what I came up with in the past year, it's about what has been happening in a very sustainable and structural way for years. Do you also have your own ideas that you are trying to implement?
‘In the field of the creative industry, the third priority discipline, I really want to bring focus. We have been somewhat delayed by circumstances, but we are now looking at two topics; design & circularity and design & public space. We are developing a more strategic approach towards profiling the Dutch design expertise in these fields.’ 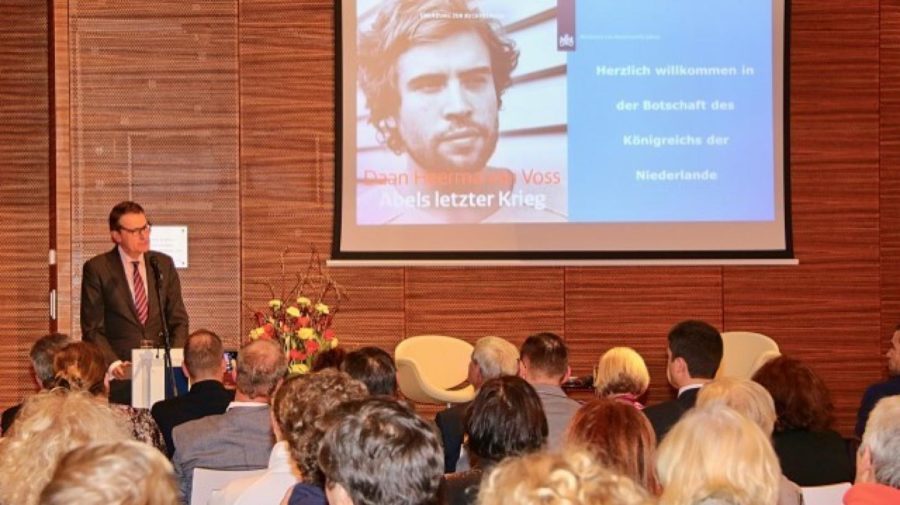 You mentioned that some circumstances can cause delays. What challenges do you have to work with, to sail the course you want?
‘The three royal visits to a number of Bundesländer we’ve organised have had considerable impact on the deployment of our capacity. But at the same time these visits are a very effective way of profiling the Netherlands, not only economically but also culturally, and we make sure that these visits give a sustainable push to what we are already doing.’

In addition to your team in Berlin, there are also consulates in Munich and Düsseldorf. How do you work together?

‘Indeed, the German ‘culture team’ has a colleague in Munich, and since recently a colleague in Düsseldorf. Germany is too large a country to cover only from this, let´s say eccentrically located capital in the North-East. But we really work as a team, we develop plans together and discuss ideas together.’

The culture of remembrance; Erinnerungs-kultur and Vergangenheits-bewältigung, is an important aspect of working in Germany

You mentioned that culture has a special place in Germany society, and that it is important to profile the Netherlands as a cultural country. Is that why you also travel a lot in Germany yourself?
‘In Germany, culture is very closely linked to public administration and politics. And government officials and politicians are not worried about being perceived as ‘elite’ when they are seen reading a book or visiting an exhibition. They are also very much present at cultural events and openings. And they expect us, as Dutch representatives, there too, you have to be there! And whenever we can, we (whether it is the ambassador, myself or a team member) also step onto the stage at an opening.

Opening speeches, Grußworten, here in Germany are not quick and jolly words of thanks, you are expected to provide in-depth exploration of the subject, and display above-average Bildung and rhetorical finesse. Without at least three to five of such speeches, an opening is not a proper opening. Personally, I really enjoy these openings, and also hugely enjoy delivering those speeches myself, and thus conducting ‘diplomacy by Grußwort’.’ 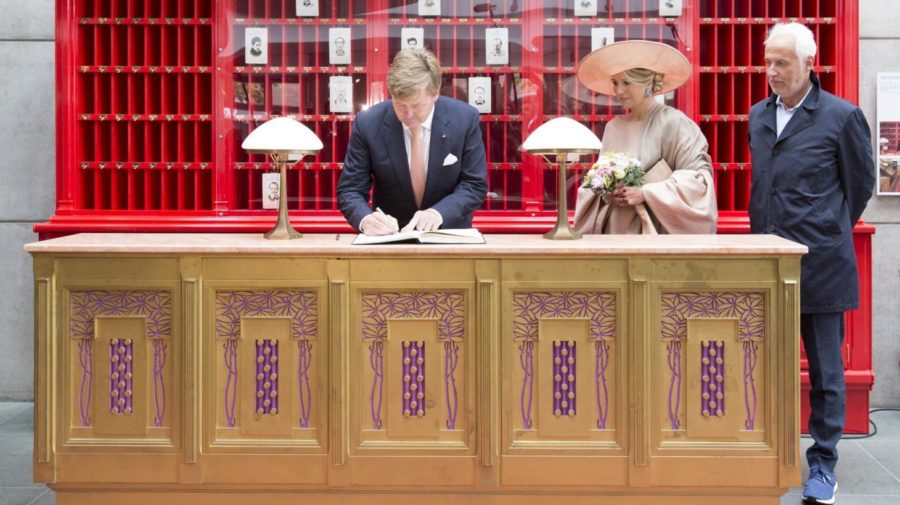 Royal Visit to the Babelsberg filmstudio's in the filmset of Grand Hotel Budapest May 2019. © Jasper Kettner

With a background as a historian, you are also interested in our shared past, which is perhaps not always easy to discuss?
‘The exhibition Jewish persecution in photos in the National Holocaust Museum in Amsterdam will come to the Topography des Terrors in Berlin. A photo exhibition in Berlin, about the persecution of the Jews in the Netherlands, partly financed by the German Ministry of Foreign Affairs. That is really very special, then you are indeed talking about dealing with a complicated past. The culture of remembrance; Erinnerungskultur and Vergangenheitsbewältigung, is an important aspect of working in Germany.’

Do you have a word of advice for Dutch cultural makers who have the ambition to work in Germany?
‘Germany is not just Berlin! There are amazing opportunities in other parts of Germany as well, in Hamburg, Cologne, Munich, Leipzig and in the medium-sized cities. Look for instance at the work of Dutch Wunderbaum in Jena. It is worthwhile to look further than Berlin, or to look closer-by than Berlin really!

In addition, sustainability is really important. Take the time to build a contact. Invest seriously in collaboration. And speak German. It is possible without, but it opens doors and gives you a huge plus in likability. Moreover, competition is fierce, you do have to come up with a good plan. Germans basically do not need Dutch arts and culture, they can fill their programmes and their spaces perfectly without us.’

What I will take with me, I think, is really not shying away from in-depth engagement and content

You have a few years in Germany, before you return to the Netherlands, or perhaps to another country. What are you going to take with you from the German mentality and way of working? The German pünktlichkeit?
‘I am pünktlicher than a German, so in that respect I fit in really well here! What I will take with me, I think, is really not shying away from in-depth engagement and content, instead of the Dutch way of taking ´grote stappen, snel thuis´. To take more and smaller steps, to really read the book, and to dare to have a conversation with each other about it. I plan to take that with me.’