Rashif El Kaoui: A Versatile Storyteller With a Fluid Identity

In recent years, few artists have traversed the field quite like Rashif El Kaoui: writer, podcaster, rapper, actor, resident at the Brussels city theatre, teacher, and workplace educator. Yet there is one constant across his work: the love for language. Portrait of a versatile “bastard” who searches for his identity through art. ‘The stage is the only place where I get space.’

Sketching a portrait of Rashif El Kaoui is no mean feat. This is in the first place due to the multiplicity and versatility of his career. El Kaoui moves elegantly between diverse disciplines – theatre, literature, music – but also between the domains of the artistic, the social and even the world of business.

Boundaries are fluid, because everything has to do with everything, everything has its place and meaning in the great cogwheel of his oeuvre. A cogwheel that also explicitly connects to that larger cogwheel of the world. ‘There is nothing that does not touch something else’, El Kaoui refers to the Dutch writer Jeroen Brouwers. It's a quote that fits him perfectly. It fits his material being. Yes, this second, inescapable fact of his body makes El Kaoui's work even more complex to talk about. That which fits him perfectly, that which we do not want to talk about (anymore), but which we nevertheless circle around like a black hole: his bicultural origin, his Moroccan roots.

Rashif El Kaoui (b. 1988) is the son of a Belgian mother and a Moroccan father, and grew up in Tessenderlo, Limburg. This status as a “bastard” – the name of one of his recent theatre productions – and the compensating/fighting/accepting of it, permeates his life (and our conversation) willingly. As he himself says: ‘Whether that's what it's about or not, somehow that's always what it's about.’

So: Portrait of a bastard. Condemned for eternity to see his “self” through the eyes of the other. Or not?

In search of balance

Writer. Podcaster. Rapper. Actor. Resident at the Brussels city theatre KVS. Storyteller for children. Lecturer at the Antwerp Conservatory, but also in workplaces, where he teaches managers to improve their “pitch”. All that time, through all the richness of his career, there are only two projects that El Kaoui regrets in hindsight. It shows the care with which he charts his course. (But also his existential caution: he is allowed, even less than anyone else, to make mistakes.)

El Kaoui: ‘Actually, it's a constant balancing act: between what I want to do myself and what I consider to be useful, between projects that allow me to survive financially and poorly paid jobs that I find important. Either way, there is always a good reason for the things I do. I had some substantive reservations about Een jihad van liefde (A Jihad of Love, a performance based on the book by Mohamed El Bachiri, EC), but I'm glad it has been a comfort to many people. When I'm asked to audition for a series, the first thing I ask myself is whether the character reinforces a stereotypical image or not. And even my company training courses are useful to me: if I can make an employee in a pharmaceutical company feel more confident about their presentations, then I make a difference for that one person.’

El Kaoui may be a loyal backbencher, but he is also an ambitious artist

El Kaoui talks about ‘giving something back’, easily becoming involved in the projects of others – out of friendship, or because he sees the added value to society. Such unfettered giving almost sounds suspicious. Especially when his own literary work and plays like The Bastard testify to the undeniability of El Kaoui as a creative source himself. We will not be fooled: El Kaoui may be a loyal backbencher, but he is also an ambitious artist. His medium of choice? Language. Amara Reta and Rashif El Kaoui in ‘A Jihad of Love’: I had some substantive reservations, but I'm glad it has been a comfort to many people. © Koen Broos

Not the cool kid

El Kaoui confirms this whole-heartedly: ‘Love of language is a constant for me. Whether my words are spoken, written or rapped – I am a storyteller. I believe that stories bring people together. I am very interested in the oral tradition, with narratives that are deliberately neutral and open so that the narrator can give them colour.’ In the tradition of Greek rhapsodes, medieval troubadours, and contemporary hip-hoppers, says El Kaoui, the narrator and the story are inextricably linked.

He also appreciates exactly this dimension in the work of Junior Mthombeni and Fikry El Azzouzi, two theatre-makers with whom he often collaborates at the Brussels city theatre KVS. El Kaoui was featured in their plays Malcolm X (2016) and Drarrie in the night (2018): each a raw, musical, radical energy bomb that exposes contemporary racism.

El Kaoui: 'I don't think using slang or wearing a snapback is how to reach young people'

El Kaoui: ‘Junior and Fikry continue this oral tradition in their own style, but with an urban approach. I can release my anger and energy in their work, but in my own, I want something different. I strive to have those identity stories told in a different way – with a poetics and beauty of their own. I don't think using slang or wearing a snapback is how to reach young people. That's not what I want to do in my own work. I'm not gonna be the cool kid.’

The contrast (but is it really a contrast?) is indeed remarkable. The ferocious, aggressive performer portrayed by El Kaoui in the controversial performance Reizen Jihad (2015), again with Mthombeni and El Azzouzi, is nothing like the soft-spoken man in The Bastard (2021) who explores his identity suit-clad while speaking on philosophical talk shows in accent-less “high-Dutch”. Yet the boundaries between the two manifestations are fluid: Rashif El Kaoui is not one of the two men, he is both, at the same time. Reizen Jihad has been a turning point in accepting this duality, he says.

El Kaoui: ‘I don't know if it had to do with the piece itself or the timing, but I suddenly became aware of the fact that my identity was often “objectified” by others, used as a tool for certain purposes. But I can just as well take up that tool myself. Reizen Jihad turned me into a subject with agency about his own story. I could not have made The Bastard without that performance.’

El Kaoui realizes that the core of his identity (and his destiny) is not fixed, but fluid, elusive, and incapable of being categorized, grasped or understood.

Rashif El Kaoui (left) in ‘Reizen Jihad’: 'I suddenly became aware of the fact that my identity was often “objectified” by others, used as a tool for certain purposes.' © Stef Depover

The eye of the other

At this point in the conversation, we end up, almost unwillingly, in the heart of the black hole. Where everything, both professional and private, begins: El Kaoui's dual identity and the mechanisms that go with it. Compensating, anticipating, constantly checking one's own "I" through the eyes of the other.

El Kaoui: ‘I've been aware of that since I was little – when I was caught by the collar as a five-year-old because they thought I was going to steal something. I do not act until I have evaluated the effect of that act through the eyes of the other. Imagine if, with my skin tone and beard, I were making a statement about religion. Then it's done for me.’

El Kaoui: ‘Imagine if, with my skin tone and beard, I were making a statement about religion. Then it's done for me.'

It is a remarkable act of self-flagellation, then, that a young man who grew up with all eyes on him decides to become a professional stage actor. El Kaoui nods: ‘That is of course the great contradiction. I feel free on stage because that's the only place where I have the right to speak, where I get to take up space. I struggle to enforce that space in daily life. Acting is the magnification of what I experience every day in the public space, where everyone is looking at me. And thus, it is a search for a way to deal with that looking. I know, theatre shouldn't be therapy.’ He smiles. ‘But somehow that's inevitable.’

The ferocious, aggressive performer portrayed by El Kaoui in the controversial performance 'Reizen Jihad' is nothing like the soft-spoken man in 'The Bastard' who explores his identity. © Anna van Kooij

Of all the possible tools at his disposal for that necessary “therapy”, El Kaoui chose the softer crowbar of art, of mediation, of obfuscation – not the violent release of activism. Not an obvious choice, given the personal suffering he carries with him and given the social context in which more and more artists from the decolonization and anti-racism movement opt for a hard, political line that sometimes catapults them straight out of the art world.

El Kaoui: ‘I'm well aware that I'm doing all of this to prove them wrong, whoever they may be’

But El Kaoui has chosen his path. Don't frighten, he told himself. Don't be aggressive. Keep pleasing. It has brought him far: as a much sought-after actor, and a welcome guest. But there are pitfalls too, in terms of peace of mind: that extreme caution in speaking and acting, that tight control over one's image and work, these things must come into friction with his “being”, right?

El Kaoui: ‘I am very attuned to that. I'm well aware that I'm doing all of this – working hard, reading a lot of books, always looking good – to prove them wrong, whoever they may be. I am proud of the armour I have put up, but I also know that I am its prisoner. Again and again, I have to look within that armour: where am I in this whole, what do I want? Breaking away from that is a long process.’ He pauses. ‘I'm working on it.’ 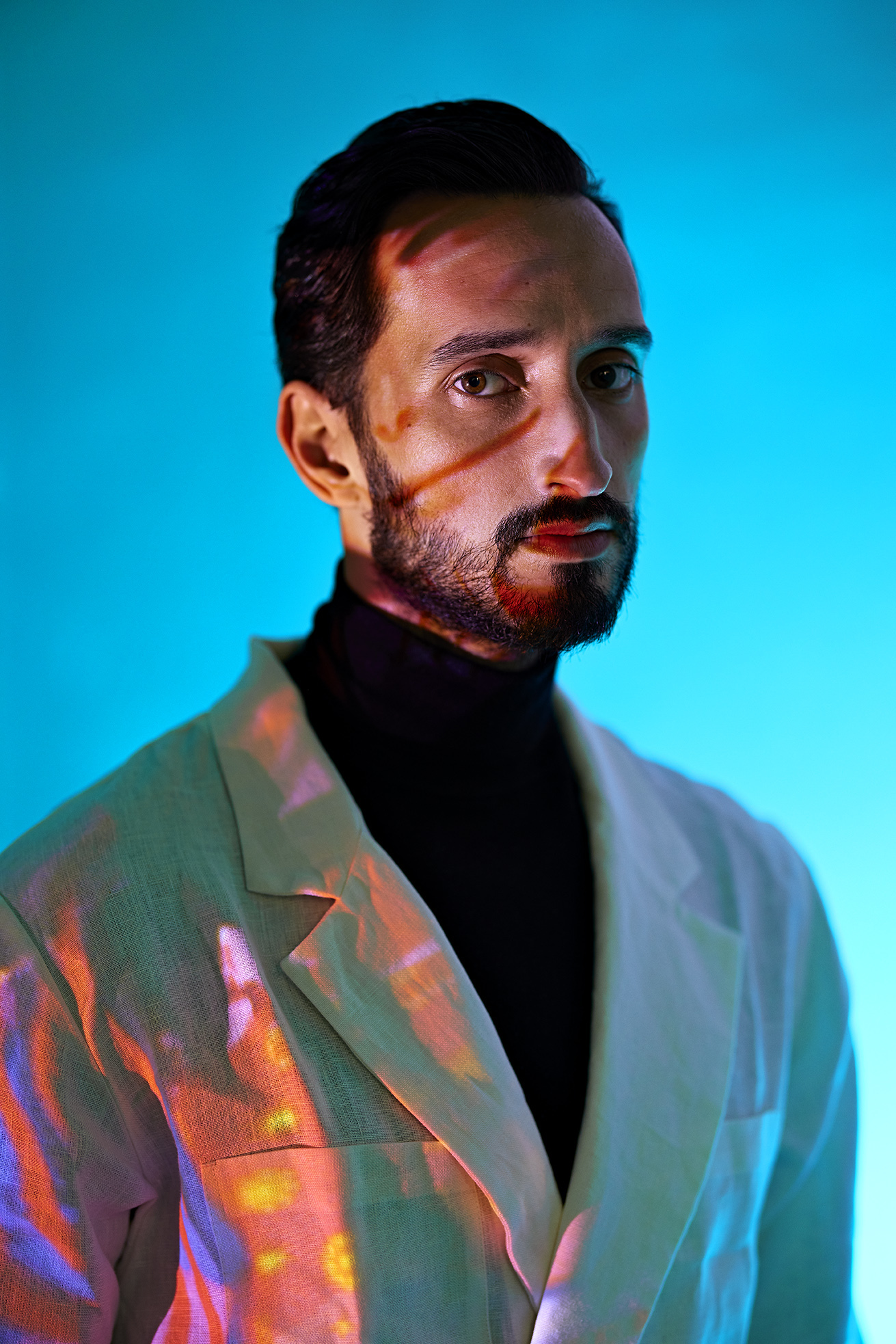