Publications
The Field of the Cloth of Gold: When Kings Dressed to Impress for Peace Negotiations
0 Comments
delen

The Field of the Cloth of Gold: When Kings Dressed to Impress for Peace Negotiations

In the midst of Brexit negotiations, we commemorate the five hundredth anniversary of “the first European summit.” In 1520, a temporary city suddenly emerged in the countryside near Calais. The English King Henry VIII and his French rival, King Francis I, met for diplomatic consultations, which later became known as the Field of the Cloth of Gold. The meeting is etched in memory forever, more for its splendour than for its political consequences. 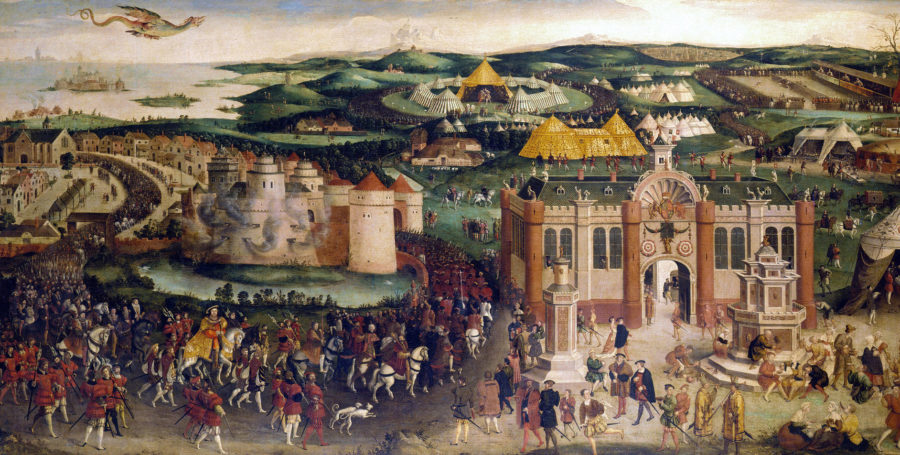 The arrival of King Henry VIII at the Famous Field of the Cloth of Gold on 7 June 1520. © Royal Collection, Hampton Court Palace, London

A palace built of wood, with the effect of brick and natural stone, about half of the surface covered with precious stained-glass windows, and immense Byzantine carpets laying on the ground. A fountain spouting white and red wine. Hundreds of tents as far as the eye can see: made from pine, oak, or walnut, and notably, pines from Auvergne and Forez. They are decorated with golden apples and banners, but the most magnificent is the tent of the French king: 36 meters high, made of silk from Tours, and covered with lily flowers and gold embroidery from Italy. A statue of Saint Michael, the patron saint of France, rises above it.

In the spring of 1520, the countryside near Calais had an unprecedented appearance, like never seen before in local history. Thanks to thousands of dressmaker apprentices from France and England, a real town emerged on the French-English border between Guînes and Ardres, which, from 1347 to 1558, was under British rule. 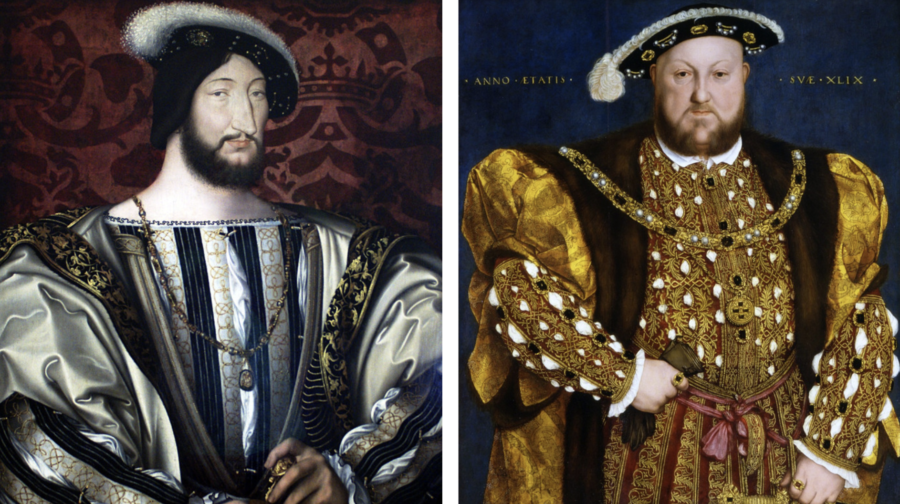 Why this great display of wealth and extravagance? A summit took place between the English King Henry VIII and his French counterpart King Francis I. Pacifism was flourishing. Moreover, from a financial point of view, Francis I had every interest in negotiating peace; In the year before, no matter how deep he had reached into his pockets, he had tried and failed to become Holy Roman emperor, for the benefit of Charles V. His underlying intention was to prevent the English monarch from entering into an alliance with Charles V, as it would result in the French kingdom becoming defacto isolated. 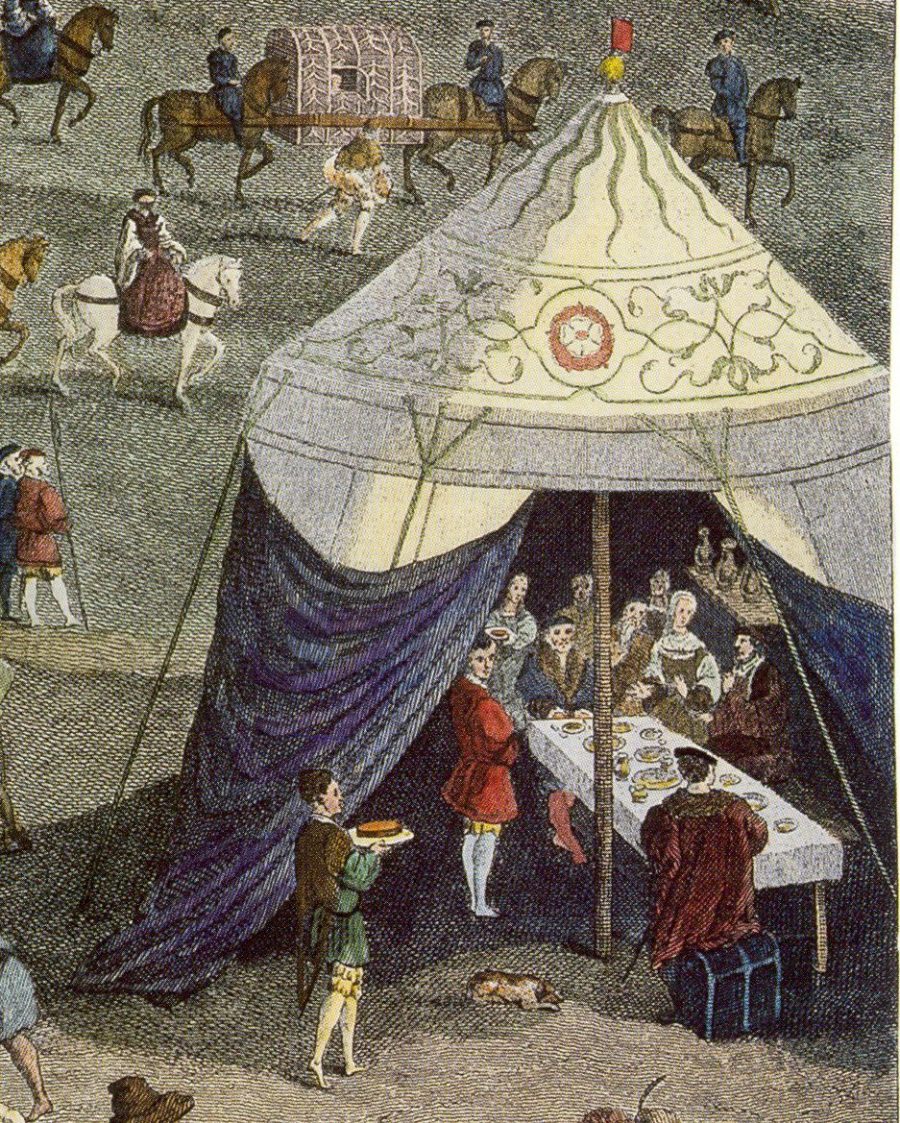 Fragment of engraving by James Basire in 1774 from an oil painting in the collection of George III of England. © www.greydragon.org

Hence the plan to convene this diplomatic meeting. It had to take place before the summer, as the French queen was pregnant and could not travel after the summer. The meeting was mainly a large-scale competition, in which each of the two monarchs (Francis is age 25, Henry is age 28) can display their power, martial art, courage, and generosity.

From 7 to 24 June, the duration of the actual Field of the Cloth of Gold, there is, according to the chronicles of the time, an unprecedented display of splendor. ‘It might be the first time that so much wealth is on display,’ confirms Charles Giry-Deloison, Professor of Modern History at Artois University, who wrote a book about the camp in 2012 (1520, Le Camp du Drap d’Or: La rencontre d’Henri VIII et de François Ier, Somogy). This already became clear from the palace and the tents, but the catering was not left behind. Food was provided for the fifteen to twenty thousand people present. There were elaborate banquets and, according to historians that studied the account books, two thousand sheep and seven hundred sea eels for the weekend alone. The wine came from Burgundy and Gascony, beer and herbal wine were unlimitedly available.

Gifts were exchanged between both sides: gold and silver dishes, jewelry, armor

There was dancing, there was jousting on horses, there were fireworks. ‘The music also played an important role, [as] competitions between musicians took place,’ notes Pascal Brioist, Professor of Modern History at the University of Tours. He recently published a biography of Francis I. ‘Francis I had appointed composer Jean Mouton to be in charge of music, [and] Henry VIII [...] composer Robert Fayrfax. This encounter had the allure of a knightly novel.’ Balls, sometimes costumed, were held. There were beautiful garments to be seen far and wide, says Charles Giry-Deloison: ‘The gentlemen had clothes made out of gold and silk (“gold sheet”), while they normally did not have the right to do so: the wearing of luxury clothes was strictly regulated and reserved for the powerful of the kingdom.’

Gifts were exchanged between both sides: gold and silver dishes, jewelry, armor. The large-scale propaganda gesture costed a fortune: the French King and a few feudal lords had to take out loans to impress their British confreres.

Despite the Franco-English rivalry, the atmosphere was congenial. Charles Giry-Deloison points out: ‘Before the meeting, there was a lot of mistrust; both entourages feared confrontations. But in the end, everything went well and both monarchs got along.’ The kings even pulled a few pranks: on June 17, Francis I paid a surprise visit to Henrik VIII’s room in the early morning! ‘A few days later Henry VIII played the same joke’.

The result of the display of luxury was . . . nothing. A vague marriage promise was signed between the Dauphin of France (three years-old at the time) and Mary Tudor (four years-old at the time), yet it was never kept. There is not one concrete agreement resulting from the meeting. Is it because Henry VIII lost a wrestling match with Francis I? ‘I won’t find out if that’s apocryphal,’ Pascal Brioist admits. ‘I have great doubts about that anecdote.’

Tapestry showing Kings Henry VIII and Francis I at the Field of the Cloth of Gold, c. 1520

Whatever it may be, a few days later Henry VIII meets Charles V in Grevelingen (Gravelines), and the following years he closes an alliance with him. It can thus be concluded that the Field of the Cloth of Gold, which is sometimes described as the first European summit in history – which is certainly an exaggeration according to Pascal Brioists: a more appropriate description would be ‘a great diplomatic moment’ – has led nowhere. ‘We have to put ourselves back into that context,’ states Charles Giry-Deloison. ‘Author and diplomat Jean Giraudoux called peace “the interval between two wars.” We’re in a world of wars and power relations.’ Even though the monarchs valued each other, there was a second meeting in 1532, between Calais and Boulogne. It was the last encounter between the French and English monarchs until 1843, with the semi-official visit of Queen Victoria to King Louis Philippe in his castle, Château d’Eu in Normandy. 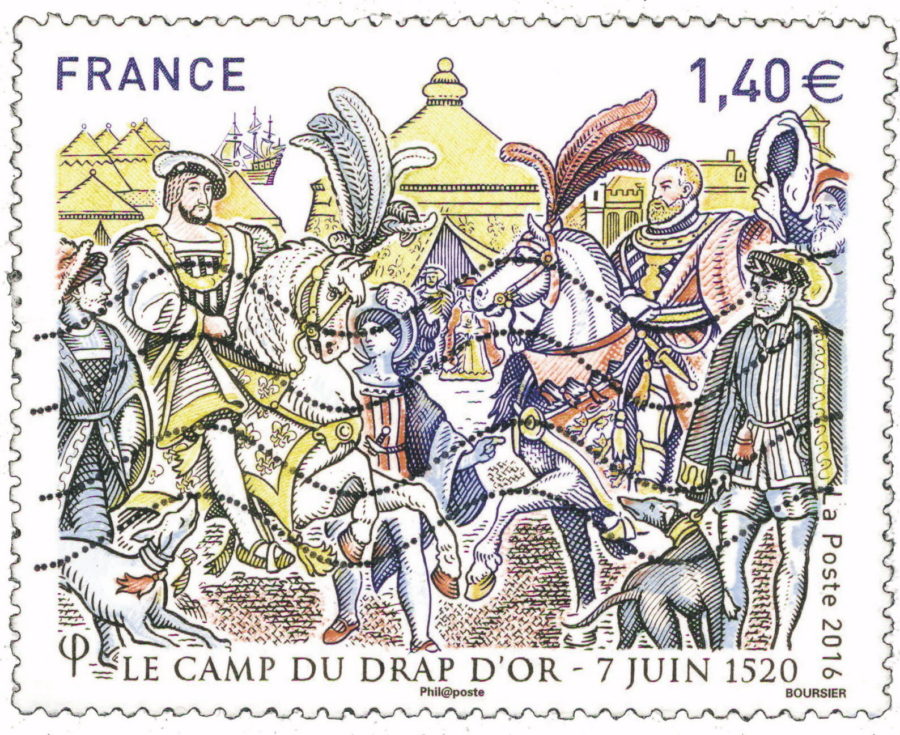 French stamp commemorating the meeting between Francis I and Henry VIII

There is nothing left of the Field of Cloth of Gold presently, everything was dismantled once it had ended. The wood was used for the fortifications of Ardres, to protect the town from future attack by Charles V. The frame of the tents and pavilions was reused by the artillery of Francis I. A memorial was later erected in Balinghem at the alleged site of the encounter. In the clock tower of Guînes, there is a museum with an area dedicated to the memorable encounter of the Field of the Cloth of Gold that took place five hundred years ago.