For years, Klaus Verscheure (b. 1968, Kortrijk) has worked as a director on many well-known Flemish television series. Lately, however, he has been making a name for himself as a visual artist, and his work has been shown in both New York and Los Angeles. His first book was recently published, entitled Black is a Color. An interview.

In 1989, you graduated as an animator from the Royal Institute for Theatre, Cinema and Sound (RITCS) in Brussels. About five years after graduation, you started your career as a freelance director for various television series.
“Although I did direct a fair number of television dramas in the past, I’m currently no longer involved with that type of work. At the moment, I am focusing on completing audio-visual projects for museums. That particular segment of the market is more in line with the artistic world I live in.” 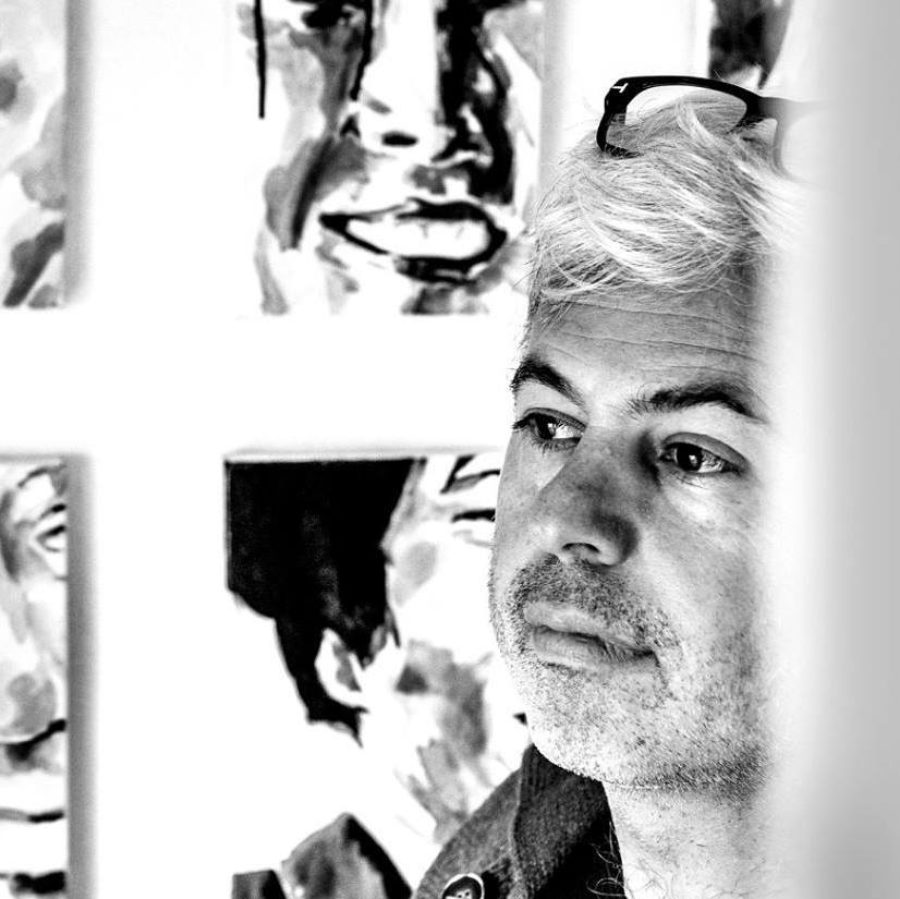 As you are expanding your artistic body of work, you often collaborate with musicians. You, for instance, joined forces with Stuart A. Staples, lead singer of indie band Tindersticks. How does someone from Belgium end up working with such a renowned musician?
“When I’m writing a screenplay, the scenes will always be accompanied by music in my head. For one particular project, I had drafted a shortlist of musicians I wanted to work with, with Nick Cave at the top of that list. It also featured both Tindersticks and Damien Rice. Asking whether Cave would want to be involved was similar to asking our Lord to come down from heaven to shake your hand. Damien Rice was interested in a collaboration, but his record label would not allow it. For these reasons, I felt encouraged to get in touch with Stuart A. Staples, and to send him my screenplay. Within a few weeks, he sent me an email. We talked on the phone, and decided to meet up. When we met, I felt an instant connection. And, as they say, the rest is history… We have collaborated on many projects, and working together has evolved into a long-standing friendship. He composed the soundtracks for the video installations I designed for the In Flanders Fields museum and C-Mine.” 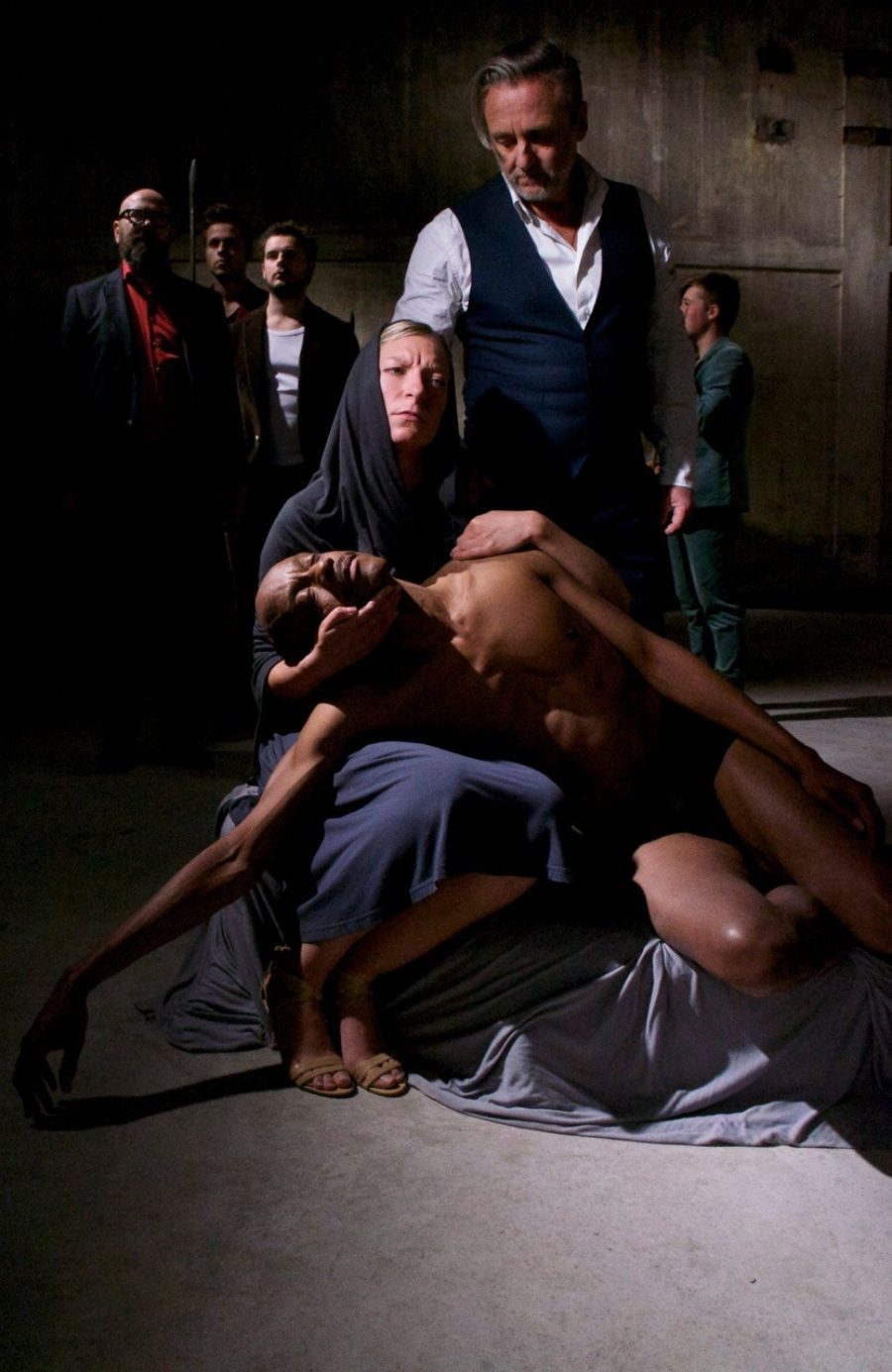 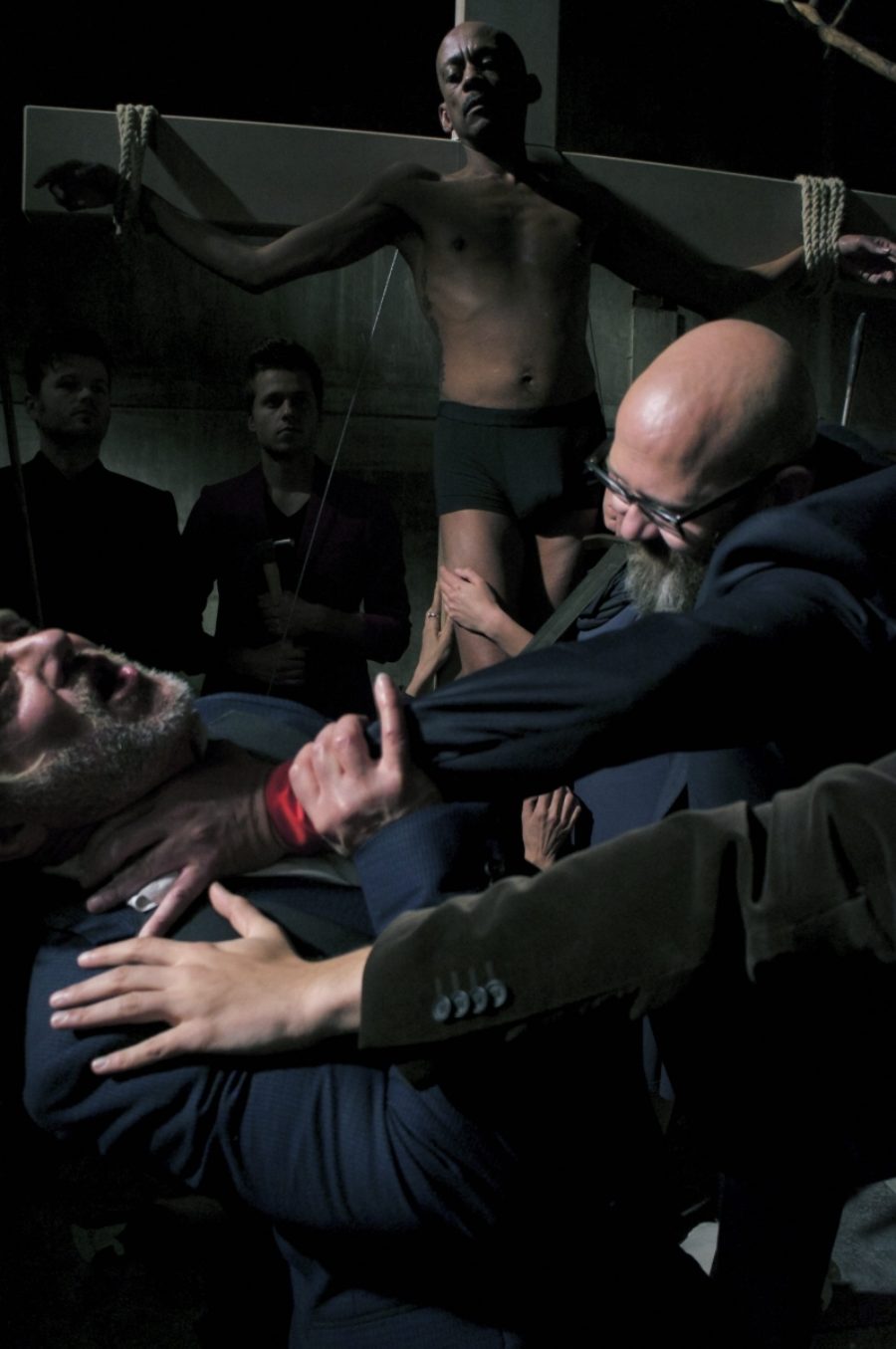 Yet soon after that, you ‘cheated’ on him with singer-songwriter Tom McRae.
“I had asked Stuart to compose the music for one of my own video installations,14EMOTIONS/Allegoria Via Dolorosa, but he wouldn’t start working on it until the video was finished. In the meantime, we had started to collaborate with Tom McRae for the pilot episode of a television series. Tom and I really clicked, and that is why I asked him whether he would be willing to compose the soundtrack. I sensed he would get the story I wanted to tell. I gave him my storyboards, and tried to explain how I experienced those 14 emotions to the best of my ability. Tom was excited. The result blew me away. We have already exhibited the video installation a number of times accompanied by a live performance of the soundtrack by the Spectra Ensemble. The installation is a contemporary interpretation of the Way of the Cross we know from Catholicism, but stripped from any religious content."

“Adam&Eve/Eve&Adam is one of my other video installations featuring Tom’s music. In one way or another, I keep referring back to the Bible in my video installations. That book remains a continuing source of inspiration. Nevertheless, the world of religion is not one I am familiar with. However, at the same time Christianity is part of Europe’s foundations, and is therefore part of my upbringing. The Bible is filled to the brim with horrific atrocities. Despite those atrocities, it has dictated the way we live our lives for centuries. I simply cannot wrap my head around that, and that is precisely why I am so intrigued by it. My video installation Adam&Eve/Eve&Adam is a muted video dealing with psychological abuse. It features Eve as the lesser being, the woman as a subordinate in the way it was dictated by the Church as an institution. In my video Adam becomes Eve and vice versa: no more gender roles, no more gender.” 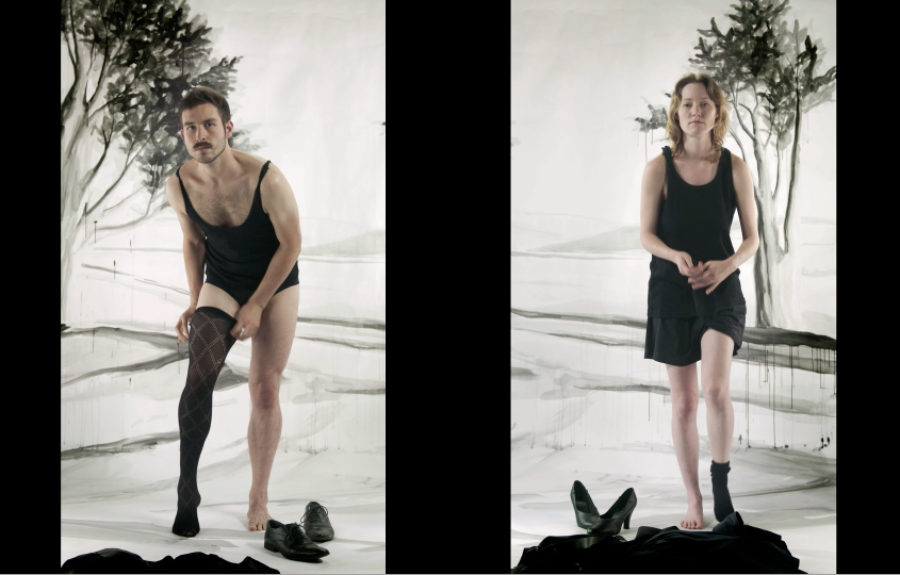 Can you describe the process behind making a video? Do you start with some sketches or drawings? And will you then start to look for the right actors, dancers, and music?
“I think in a series of images anyway, but I will write it out in full first. I write a draft of the screenplay, and turn that into a detailed script. Because I was trained as an animator, I can quickly sketch out the necessary storyboards. It is an effective way to explain what is in your head to the crew. When I am on set, I have a clear idea of what I want and how I want it. Indeed, I will then look for actors who can perform what is in my head. They don’t necessarily have to be professional actors, and can just as well be – and quite often are –dancers. When it comes to the music, I can also explain how I want something to feel. I have plenty of ideas about instrumentation, and about how grand or intimate I want it to sounds, but will then put all my faith in the composer. In the end, this is a team effort. As we work together as a team the most important thing is where I, being the artist, lead the team.”

When you paint, you get to see the result immediately. When you make a film, you can easily spend (half) a year on the process. It seems to be a very different way of working, in my opinion.
“Painting is a highly individual process. When I paint in my studio, I am completely isolated from the rest of the world. Making videos takes a larger crew. When you paint, you do not require that much: paint, paper and canvas. Making a video installation can become very expensive very quickly – at least, it does when you make the videos I make. I need a complete setting: actors, costumes, cameramen, and lighting.” 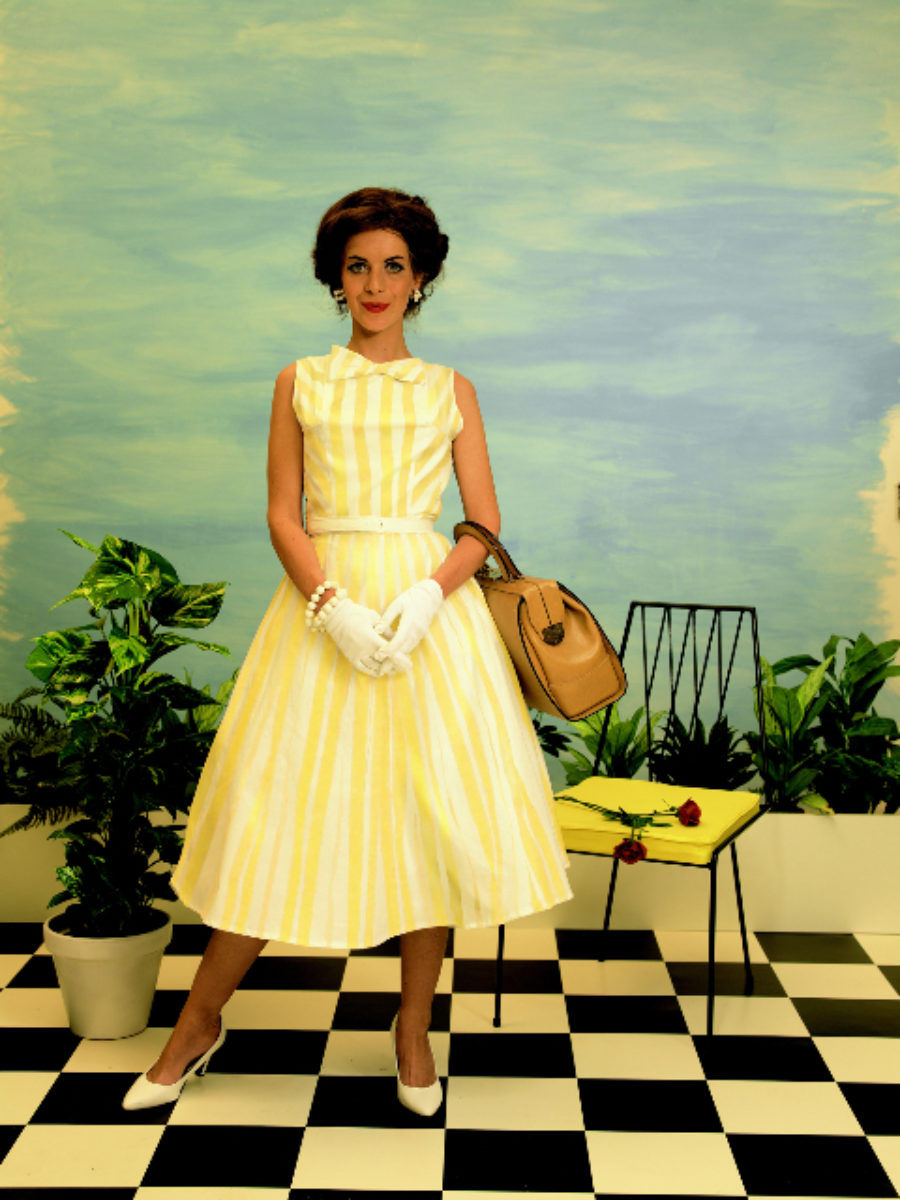 In 2008, the Broelmuseum in Courtrai asked you to create a work of art commemorating Expo 58, the Brussels World Fair.
“I decided to recreate a picture that was made around that time. Basically, I wanted to use contemporary techniques to make a copy of the original photograph. I chose a fashion photo, which I scanned and made into a 3D model, because I did not know the exact proportions. The only thing I did know for sure was the size of the floor tiles. That way, I was able to determine that the model was 1.63 meters tall, and how high up the camera had been. I found a model with a similar look, and had someone replicate the dress and the chair. I filmed the entire process, and at the exhibition, people could see the picture with a video playing alongside it. Someone from the Flanders Heritage Agency had noticed it, paid me a visit at my studio, and asked me to put on a solo exhibition in Ostend’s Ford Napoleon. I named that exhibit Holiday Greetings. That show took place in 2009. Soon after, I had a gallery in Amsterdam, and the year after that my work was shown in New York.”

The beauty in darkness

Your painted ‘portraits’, are never ‘just’ portraits. You will never look for what is obviously beautiful. I always sense a kind of ‘dark’ beauty. Horror and violence are always lurking in the background.
“I cannot simply paint portraits of people without knowing their story. In fact, the story is the most important element to me. However, I don’t feel the need to tell the outside world all about it. In the Smiling Faces series, each image was given a title, as well as a number. They are portraits of criminals, but you don’t need to know that. When someone wants to appreciate the portraits, he or she does not require the full background story.” 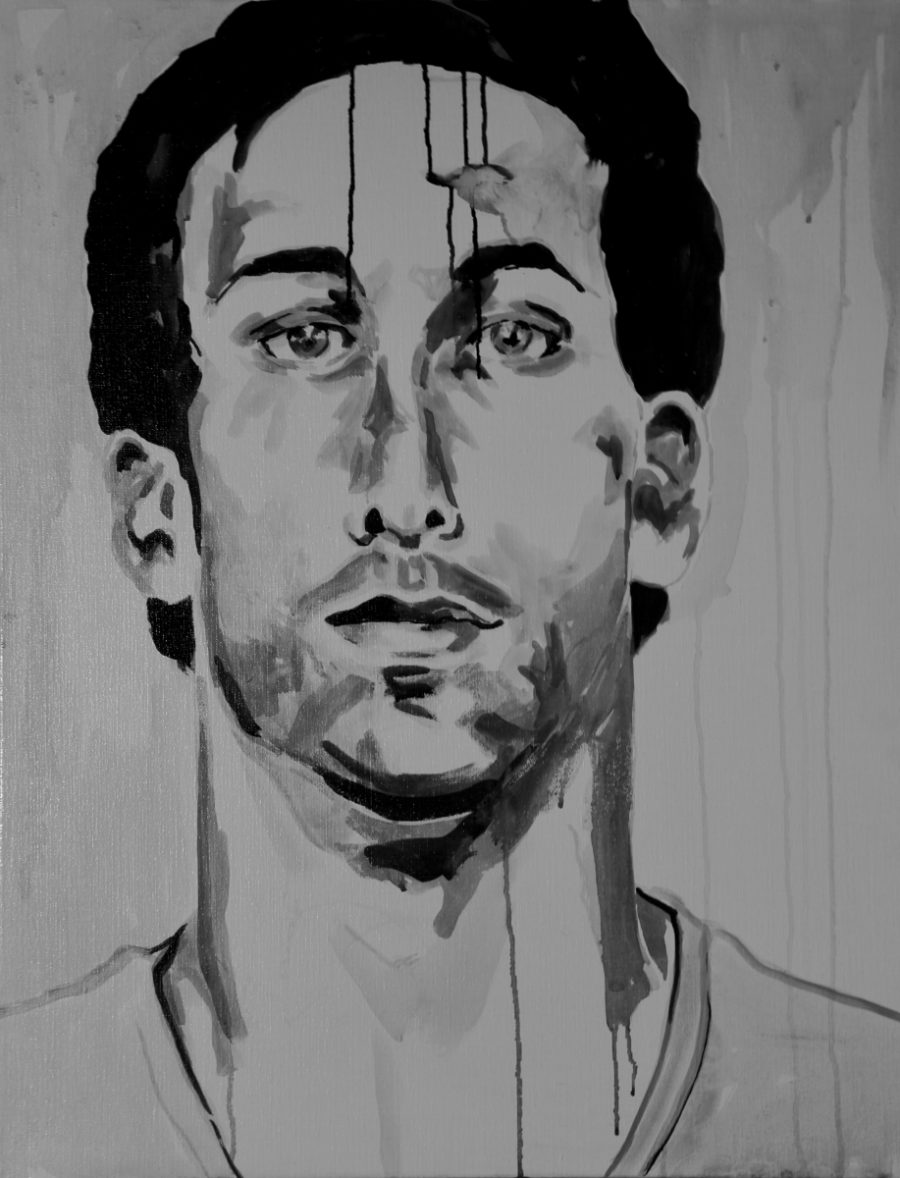 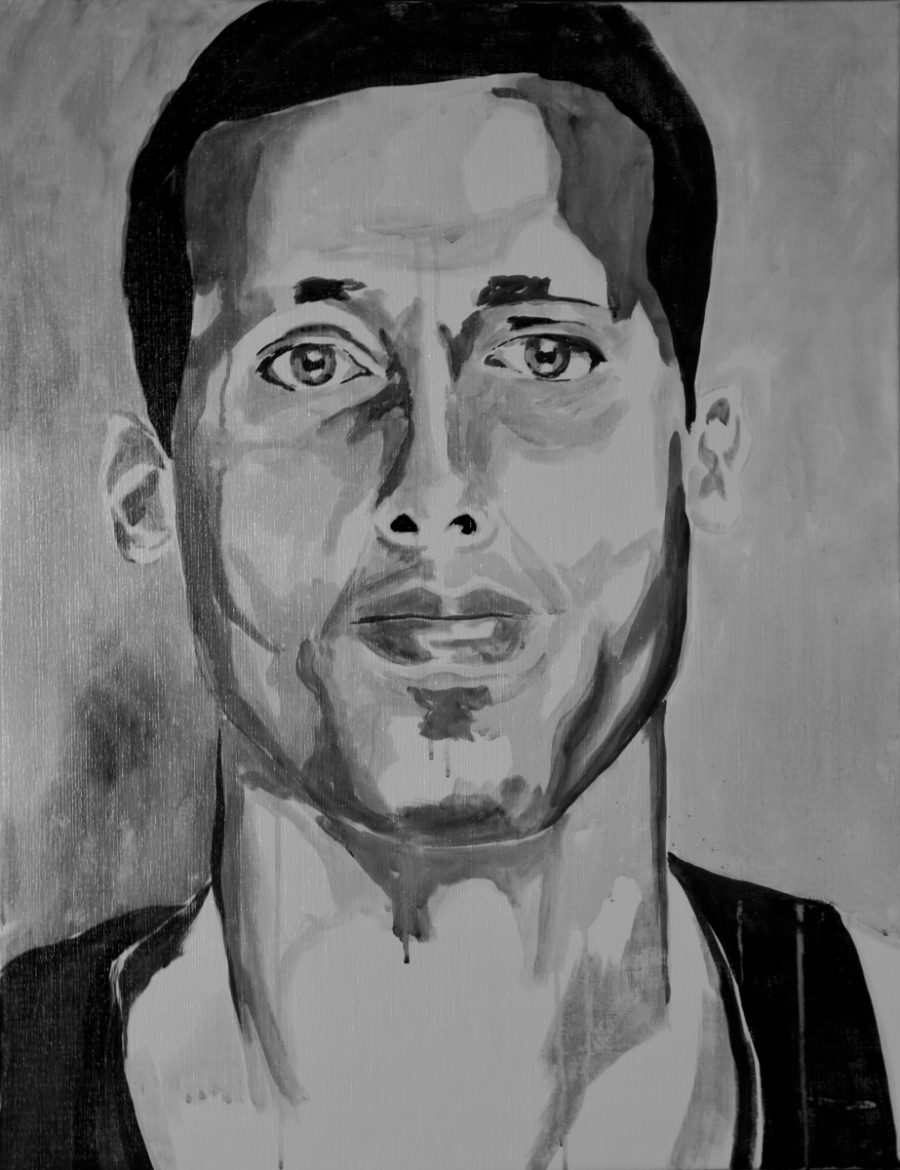 I read that you usually paint what has just happened. Literal and figurative details are left out. Since you paint with diluted paint, your ‘drippings’ have become somewhat of a trademark.
“I don’t want to simply paint lovely little pictures. I want to show emotion by actually removing every ounce of emotion from the image. I basically strip my work from all anecdotes. I want people to be moved by the work, without being able to pinpoint why. You will never come across a portrait of mine featuring any kind of action, nor will you see wind in my landscapes. My work focuses on that particular moment in life everyone is familiar with, that moment in which you either choose to resort to violence, or you don’t. My work deals with that split second in which you become either the perpetrator, or the victim. My landscapes all feature locations where something has happened, where I have stopped time. Every single house I paint is a crime scene. The same goes for my trees and landscapes. I don’t just paint pretty pictures. I don’t want to make the spectator feel ill at ease, but I do want to be uncomfortable myself while I’m painting. You could say I aim to reintroduce some kind of beauty into the image.” 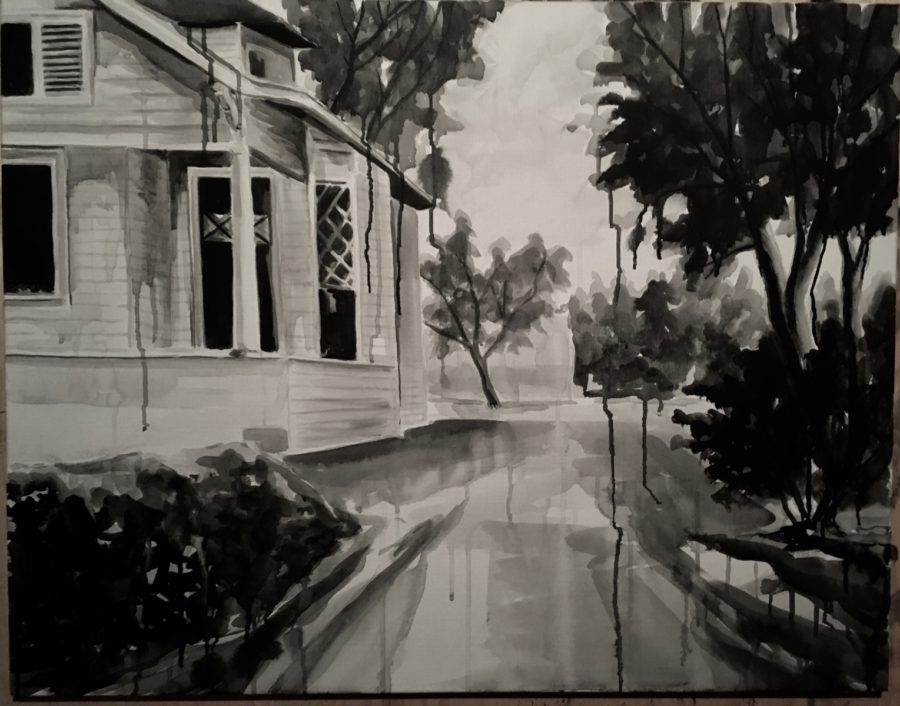 Do you have a certain schedule in mind when you work in your studio?
“Whenever my mind gets restless, I feel the urge to paint. Do I know what I’m about to paint? No, I don’t. I do know whether I’ll be creating a portrait or a landscape. I’m able to get in the zone at the drop of a hat. I enter the studio, turn on some music, crank up the volume and I’m there.”

It’s hardly a coincidence you prefer to use the colour black in your paintings.
“That’s true because I nearly always paint shadows, rather than light. I have noticed how over the years my fascination for shadows is growing.” 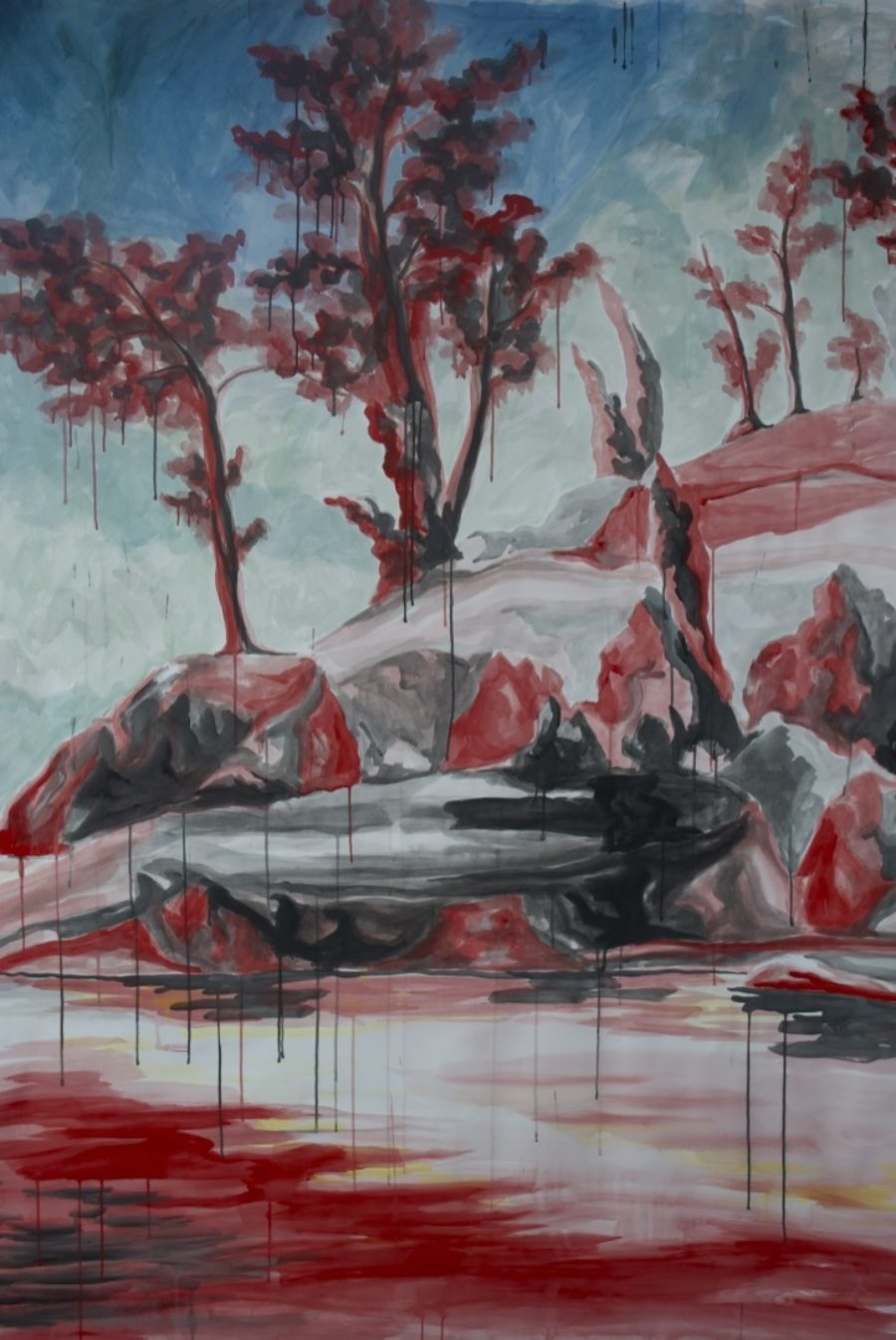 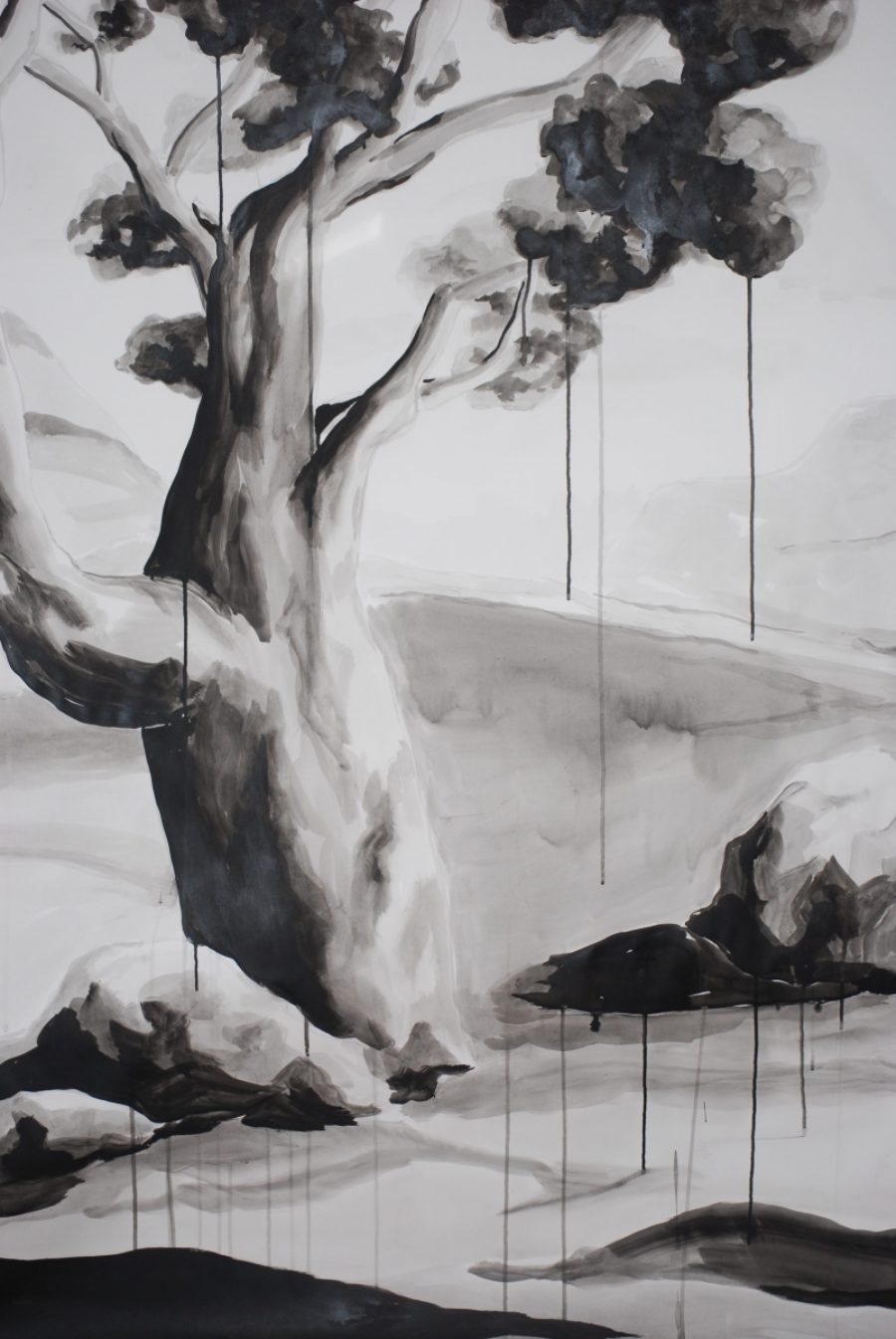 Now, at age fifty, you have published your first big book, entitled Black is a Color.
“In this day and age one is always able to self-publish, but in my case Bruno Devos from Stockmans Art Books crossed my path. It was Bruno who came up with the idea for a book. I’m still incredibly grateful he did. We’ve come a long way together this past year. I, for instance, wanted to use three types of paper, as I wanted to print text on a different kind of paper to the one we used for the exhibition photos; I wanted it to be flimsy, almost like the pages of a newspaper. The paintings were printed on matte drawing paper, whereas my videos were printed on a glossier kind of paper. The way we composed the book is rather exceptional as well. It’s a cinematic experience, which is an important part of my work. We deliberately omitted the works’ titles and measurements, because we did not want to block the natural flow.”