With De bakvis (The Teenage Girl), Nadia de Vries has written an angsty debut about a young woman afraid of remaining in the shadows.

‘It was morning. I listened to pop music for lonely people. On the bathroom floor, my body felt like a glove. That is, someone else’s glove – I didn’t fit in it.’ 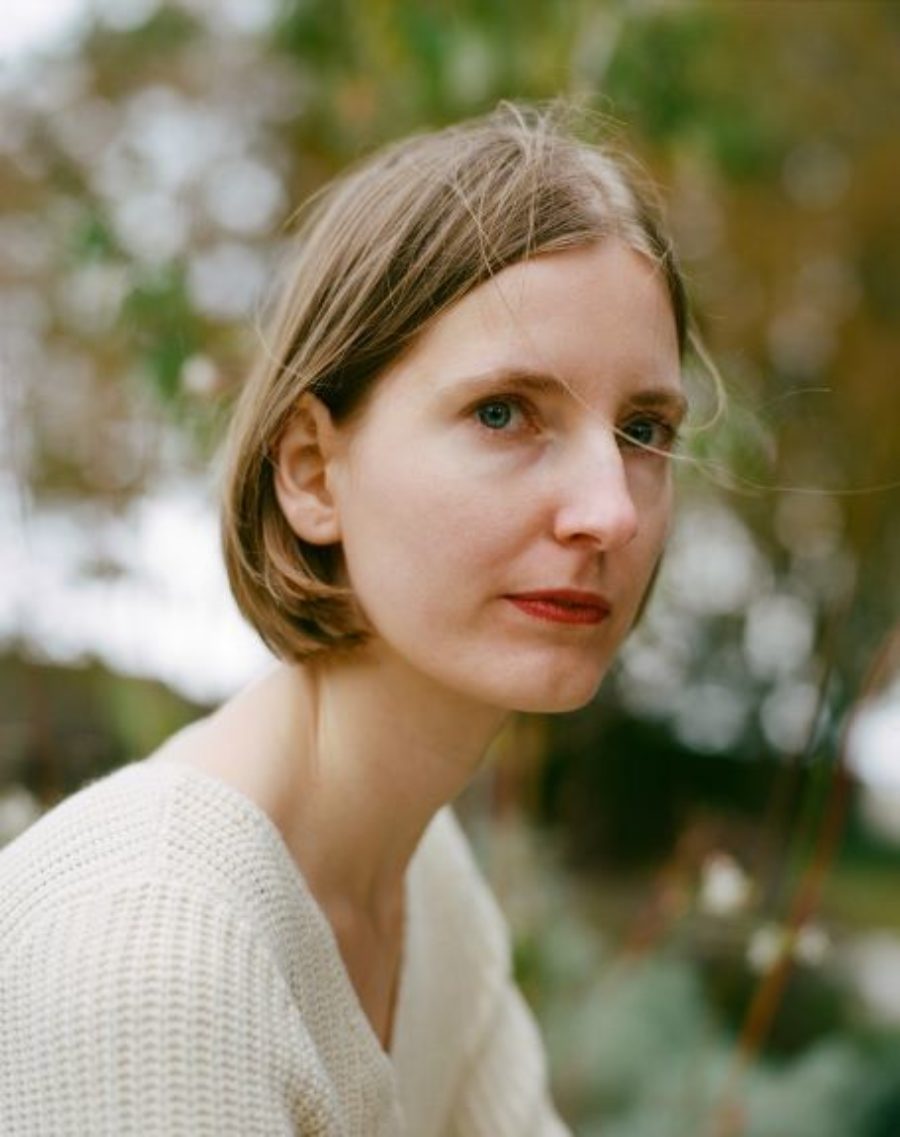 It is the opening scene of De bakvis (The Teenage Girl), the debut novel by Nadia de Vries (b. 1991), whom the NRC newspaper signposted in 2020 as one of this decade’s literary talents on the basis of two English-language poetry collections and a volume of essays. This short novel confirms that accolade completely, because it is an original debut full of simple but beautiful, hard-hitting writing. De Vries tells a pared-down story that becomes increasingly gripping and feverish, ending with a grand finale.

The book tells the story of a young woman in her thirties Thistle Neverthought, although we only learn her name about halfway through. Thistle’s father died in a mysterious plane crash when she was 13. She grieved a little, or at least tried to, but became estranged from her mother, her sister, and herself. Thistle lives alone in a small flat in an unnamed big city, although she does mention a boyfriend once. In fact, she has no contact with anyone, except for some weasels she saw at her father’s funeral and who continue to visit her, and the furniture in her apartment, including some very expensive ceramic pelicans, which she received from the airline as compensation for the loss of her father.

There was a lawsuit, which the family lost. Why? ‘The airline’s lawyer was more expensive and the judge ruled in their favour.’ Among other things, it is these kinds of sentences, at first sight innocent but lethal, that make De bakvis special. For example: ‘After the hearing, we had a house with 15 ceramic pelicans in it and no dad.’

Fatherless Thistle finds little comfort in her mother and sister. Her teenage years pass her by. ‘I was seventeen, lonely and angry. I was afraid that I had wasted my puberty on grief and other dark things.’ She becomes a woman, but actually would prefer to be a girl forever.

De Vries has written a pared-down story that becomes increasingly oppressive, and ends with a grand finale

And this is where the story takes a dramatic turn. In an effort to retain her youthfulness, Thistle posts photos of her scantily clad adolescent self on an unsavoury website. Of course, the images are a hit, she even earns quite well from them, but she also learns that there are two kinds of adults, the protectors and the ruiners. Thistle is stuck in the middle, until she is eventually banned from the site. Yet another girl’s life has fallen through the cracks.

And so, one attempt after another she fails to be seen and to mean something to someone. Even at the fairground, where in more successful times she had a habit of disappearing behind the tent with a conquest, eventually nobody wants to talk to her anymore. Thistle becomes more and more entangled in her loneliness and her conversations with furniture and animals, such as a tick or a moth, in which she recognizes her dead father.

De bakvis is the story of a young woman who tries to get a grip on life, on the passing of time, but never seems to manage it. Her grief is far too great and too unspoken, too unprocessed. She always feels like the target of something or someone, she never really rests, and she never finds comfort. Not with acquaintances, not with strangers, nor with the animals and furniture that talk to her. Love is for her: dying together against a double-decker bus, like in the song by The Smiths, except she doesn’t have anyone to die with.

Death is always lurking in this story. This was also the case in her collection of essays Kleinzeer from 2019, in which De Vries wrote about the auto-immune disease that struck her at the age of twelve and for several years put her life on hold. She also wrote about the severe depression and the suicidal thoughts that tormented her later. Grieving is its own kind of illness, so the link between the two books is evident. But De Vries has made a true novel of De bakvis, in a crystal-clear style that gives a rare insight into the mind of someone who not only tries to curb time, but also her demons.

By the time I was in my final year, I had long stopped getting good grades. I completed my final exams with a 6/10 and did not sign up for university. I was not at all an ambitious girl, but my mother was nevertheless very proud. To celebrate my graduation she wanted to buy me a present, big or small, whatever I wanted. I chose a digital camera I had seen in a video clip. In the clip, a group of girls spontaneously started dancing sexily when the camera appeared. I could not resist that temptation. I also wanted to be front and centre.

I was seventeen, lonely and angry. I was afraid that I had wasted my puberty on grief and other dark things. Not long and my girlish figure would disappear into stretch marks and hip dips. Everything smooth would go and eventually be replaced by something else, something unknown. I wasn’t ready for that yet. I wanted to hold on to my body as long as I could, as well as the identity that came with it.

I didn’t want to go to the polls, pay insurance, or own a central heating boiler. I didn’t want to fear the police because I was not a minor. I wanted to wear chipped nail polish and make up dance moves. I wanted to be young and reckless and wild. The future, with all its ugly obligations, had to be postponed as long as possible.

When you grow up you’ll have to find a good husband, my mother said, so that you don’t have to work a day in your life.

The light in my bedroom was bright. I took off my clothes. The button of my jeans had made an impression on my skin, from a distance it looked like an atopic disease. I posed in front of my mirror and held my camera with one hand. My thumb was just flexible enough to reach the button.

I was not a natural. I lacked the hand-eye coordination to look in the mirror and focus the lens at the same time. Only with the most unflattering facial expressions did I manage to get a sharp photo. I took one shot, didn’t like it, and took another. And another. I wanted to be sultry, but I was not like the girls from the video, nothing about me was sensual or free.

I would be eighteen soon.

I connected the camera to my computer using the cable that came with it. I needed to see myself on a screen, to be able to admire myself through the eyes of another. I could tell from the file size how much space my body was taking up. I was smaller than I had imagined and that was a comforting thought.

‘De Randen’ by Angelo Tijssens: A Desperate Search for Affection