Publications
Thirty Years after the Fall of the Berlin Wall, the Great Divide is Still Visible in Germany
0 Comments
delen

Thirty Years after the Fall of the Berlin Wall, the Great Divide is Still Visible in Germany

On 9 November 1989 the Berlin Wall fell. Writer Geert van Istendael was there at the time as a journalist. What has happened to the East Germans since that historic day? They had celebrated the prompt reunification with exuberant joy. However today, thirty years later, the gap between East and West still exists.

8 November 1989, 11:30 at night. It’s my first time in Berlin, East Berlin that is, Hauptstadt der GDR, as can be read on the signposts everywhere throughout the dark side of Germany. Your editor-in-chief sends you off because dozens of East Germans are out on the streets and the old Communist rulers no longer know what to do. They won’t demolish the Wall, he adds, but the Socialist Unity Party is calling its central committee together. Go and see what’s going on there. My editor-in-chief expressed everyone’s opinion, including mine. I do not rule out that I might have overlooked it, but in none of the West German newspapers I was able to find any predictions that the Wall would fall soon. 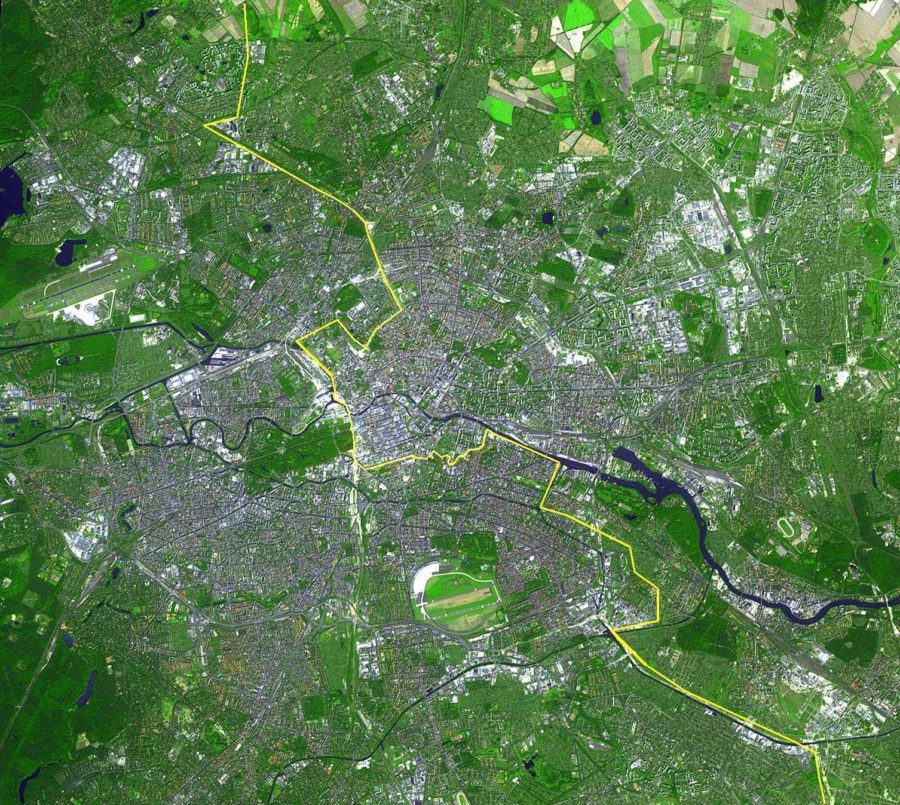 Satellite image of Berlin. The yellow line marks where the Berlin Wall once stood © NASA

On 9 November at 6 pm, I make my way to Mohrenstraße, where some bigwig of the party is holding a press conference. Günter Schabowski. We, from the foreign press, listen with surprise to the angry, almost aggressive questions of the many East German journalists that are present. Schabowski doesn’t blink an eye. The country is passing through difficult times, yet socialism will solve all problems.

Then Schabowski suddenly says that you can leave the GDR through any of the border crossings points. He adds two words with some hesitation: sofort, unverzüglich, right away, immediately. All this is said with a certain tone, as if he is reading the weather forecast. I had, and will have, never known such a huge gap between tone and content.

With his official statement, Schabowski knew how to rattle his country, Europe and the rest of the world. Real Socialism, as the rulers of East Berlin to Moscow liked to call their system, vanished into the cesspool of history. That same night, they quickly moved through the heavily guarded border crossings in large numbers, to the Kurfürstendamm, to the highly desired West. 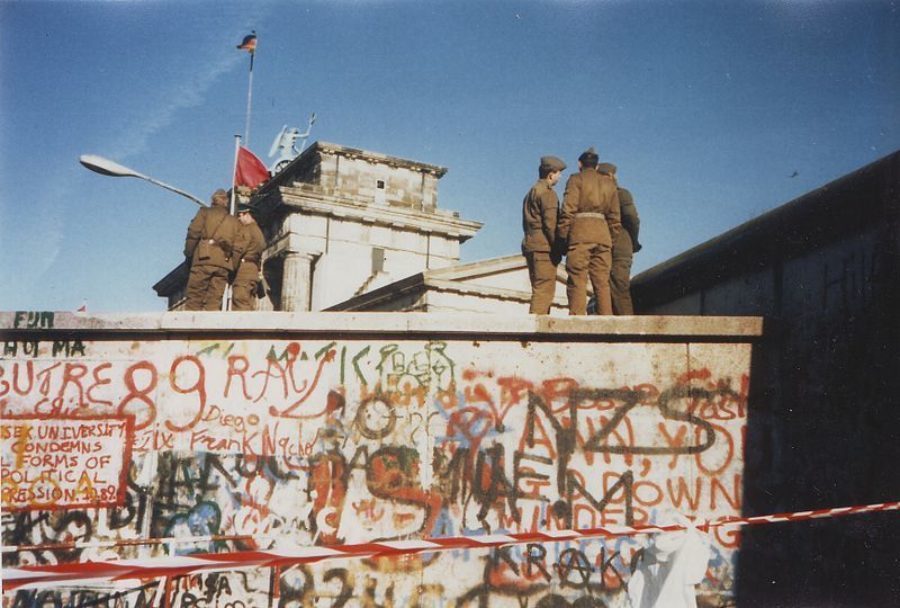 Soldiers on the Berlin Wall, end of 1989

Schabowski’s announcement would have been a mistake. He would have spoken out of turn.
Yet we didn’t hear that until two months later.
Two miracles in one day.
Schabowski made a mistake.
Not a single shot was fired.

The instructions from the police couldn’t have been any clearer. Shoot at anyone who tries to cross the border. No one shot. Perhaps Lieutenant-Colonel Harald Jäger, who was in charge of the border crossing at Bornholmer Straße and who let his fellow citizens peacefully cross against all orders, is the hero who really opened the Wall. In the preceding weeks, tens of thousands of East Germans had build up the courage to demonstrate on the streets.

They defied the feared German People’s Police and screamed en masse to let out years of pent up anger, from Plauen through Leipzig and Karl-Marxstadt to Schwerin. During those weeks, too, no shot was fired. The East Germans themselves were the ones that broke free from their worn-out region. No one else did. 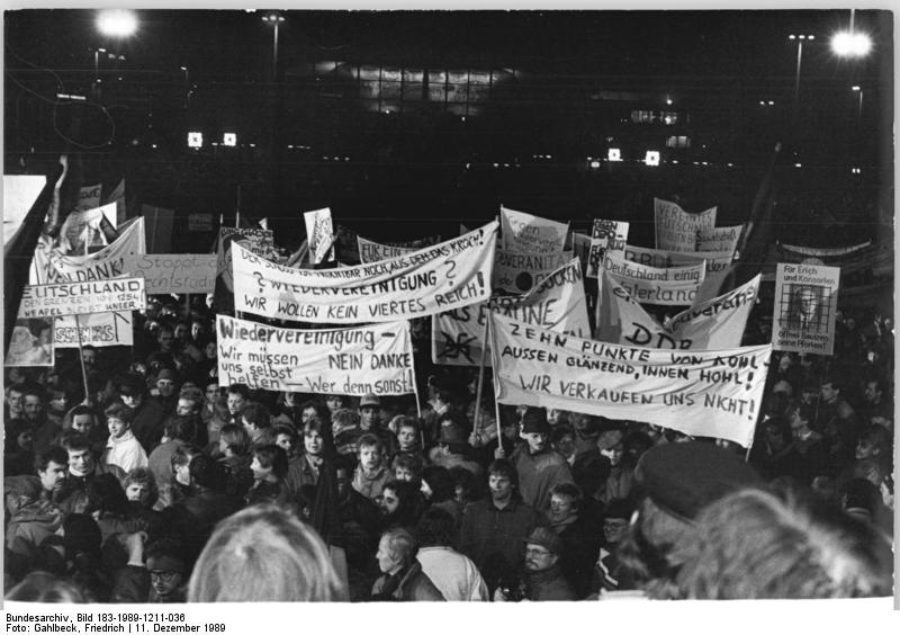 Kohl, German chancellor and chairman of the Christian Democratic Union, engineered the unification of the two German states very quickly. Yet he succeeded. Well, partially succeeded.
Even if there had been a greater political heavyweight than Kohl, it would have been beyond their powers to pull it off successfully.
A success? 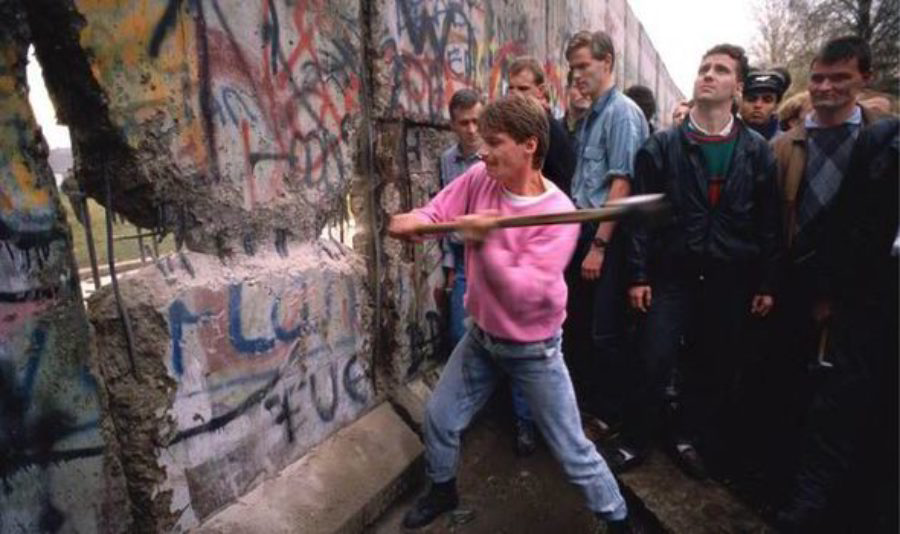 Take the road network, for example. Unmistakably improved. Anyone who has ever driven through the low mountain range of East-German Landstraßen will agree. The historic town centres have been renovated to a high standard. In the GDR, people had to line up for goods; now goods line up for people. Anyone who will deny this acts in bad faith. Let’s consider something bigger, something gigantic. The state economy of the entire country had to be privatized. Twelve thousand companies with more than four million employees. A success?

In the GDR, everyone had a job

Ask the East Germans. Within a few years, three quarters of the jobs were lost. These effects are still felt today. In the GDR, no one was unemployed. All the East Germans I spoke to after the great turning point (die Wende), even young people who had never experienced the old regime, say the same thing. In the GDR, everyone had a job. At that point they even preferred the hated red system to capitalism.

One of the consequences is that people flee their home cities. In the new federal states, people spoke about shrinking cities, Schrumpfstädte, large and small. Madgeburg, for example, has lost 20 percent of its population since 1989, Frankfurt on the Oder more than 30 percent, a little provincial town like Schwedt even more than 40 percent. The series continues and in hundreds of villages it is no different. In the villages, the basic equipment also vanished: no doctor, no primary school, no bus stop, no store. And so on. Life crumbled right in front of you. 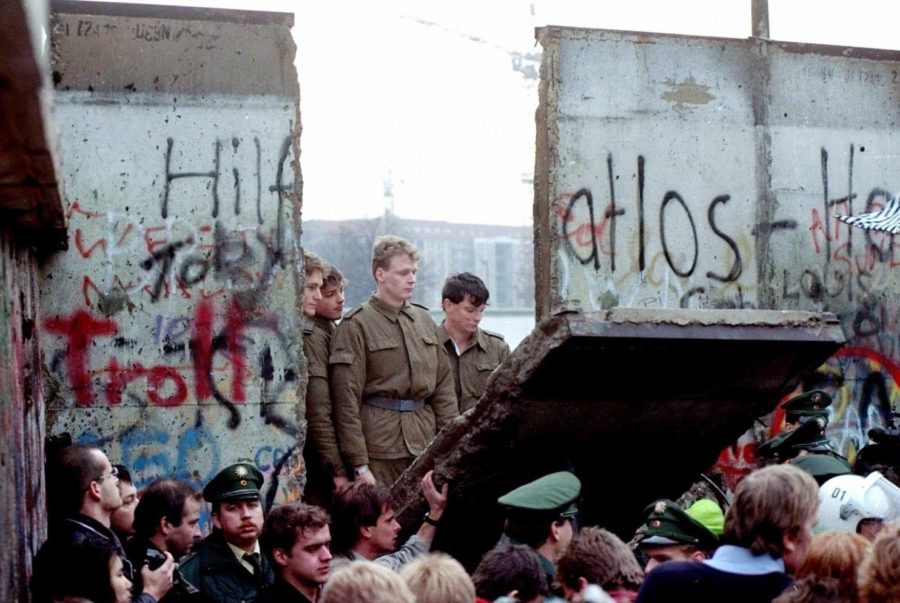 Certainly, the great boss of entire Germany has been a lady from East-Germany since the beginning of time, and the previous Federal President was also an Ossi – Joachim Gauck. That’s something, but at the same time there are so many disadvantages and it doesn’t look as if the gap between East and West will soon be bridged.

In the bureaucracy of the new federal states, you can still hear a Bavarian or Württemberg accent above the level of a doorman or a coffee lady. After all these years, this happens surprisingly frequently. Of the five hundred largest companies, 463 have their headquarters in the West. 92 percent. Of the eighty-one university chancellors, none is from the East. Zero. Doesn’t the average citizen care? Maybe. However, one will care about this: on average an Ossi earns 20 percent less than a Wessi.

Were East and West reunited too fast? Anyway, at the time, millions of East Germans, the overwhelming majority, welcomed the prompt reunification. But what then descended upon them has left ugly and deep scares that are still apparent today.

Just think about it. Having to throw away your biography, deprived of your work, deprived of various conditions that you formerly took for granted, new rulers from the West after you first drove them out of the East – one would do a hop, skip and jump for less.