The 'Black Pete' of W.B. Yeats

‘Black Pete’ (Zwarte Piet) has played a central part in the Low Countries’ annual Saint Nicholas celebrations for several, possibly even many centuries. But disagreement about the theatrical figure of Saint Nicholas’s servant is leading to ever fiercer confrontations in the Netherlands. The ongoing reassessment of this figure in the light of its racist denotations has drawn attention to its origins. Pete is known to have roots as a servant, and as a vanquished devil. Surprisingly, the Irish poet W.B. Yeats also wrote about a Black Pete in his collection of folktales The Celtic Twilight, a connection which suggests a third way of approaching Pete. 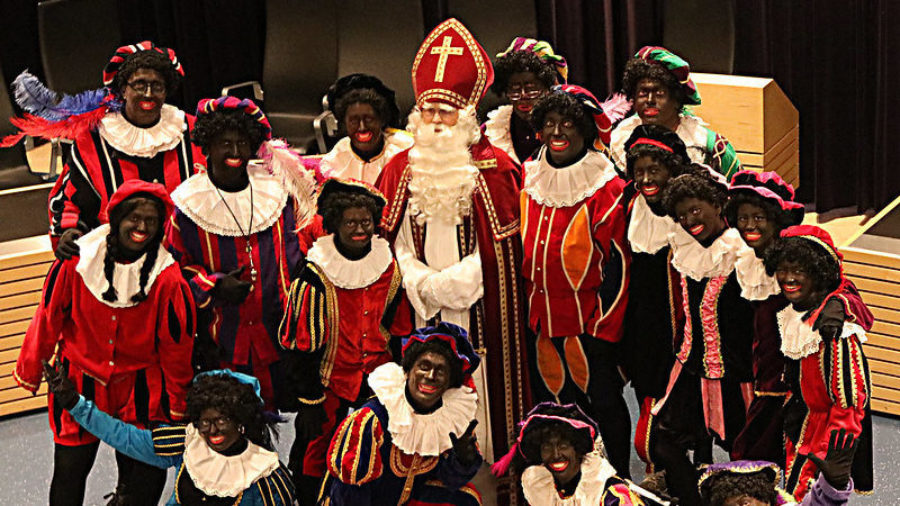 Black Pete has been a controversial figure in the Netherlands for decades. Activists point to the farcical manner in which he represents people of African heritage, combined with his servility to the white Saint Nicholas, and the Low Countries’ history of enslaving people in Africa, Asia and the Americas. A combination of strategies, including public debate, demonstrations and judicial action has recently tipped the scales in favour of a more general recognition amongst whites of the racism inherent in this figure, and of the need for reform, although the exact shape this reform should take is still uncertain. 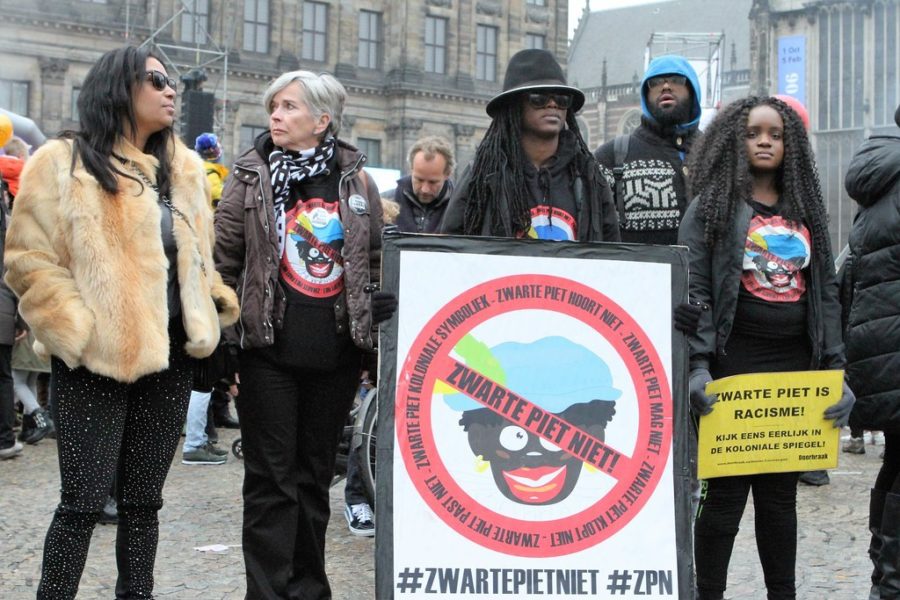 Saint Nicholas celebrations centred on children and gift-giving have taken place in Europe since at least the Middle Ages. Within these, Black-Pete-like characters can be recognised since the eighteenth century, if not before. His identification with a coon-like representation of an African or African-American person, however, dates back only to the decades around 1900. 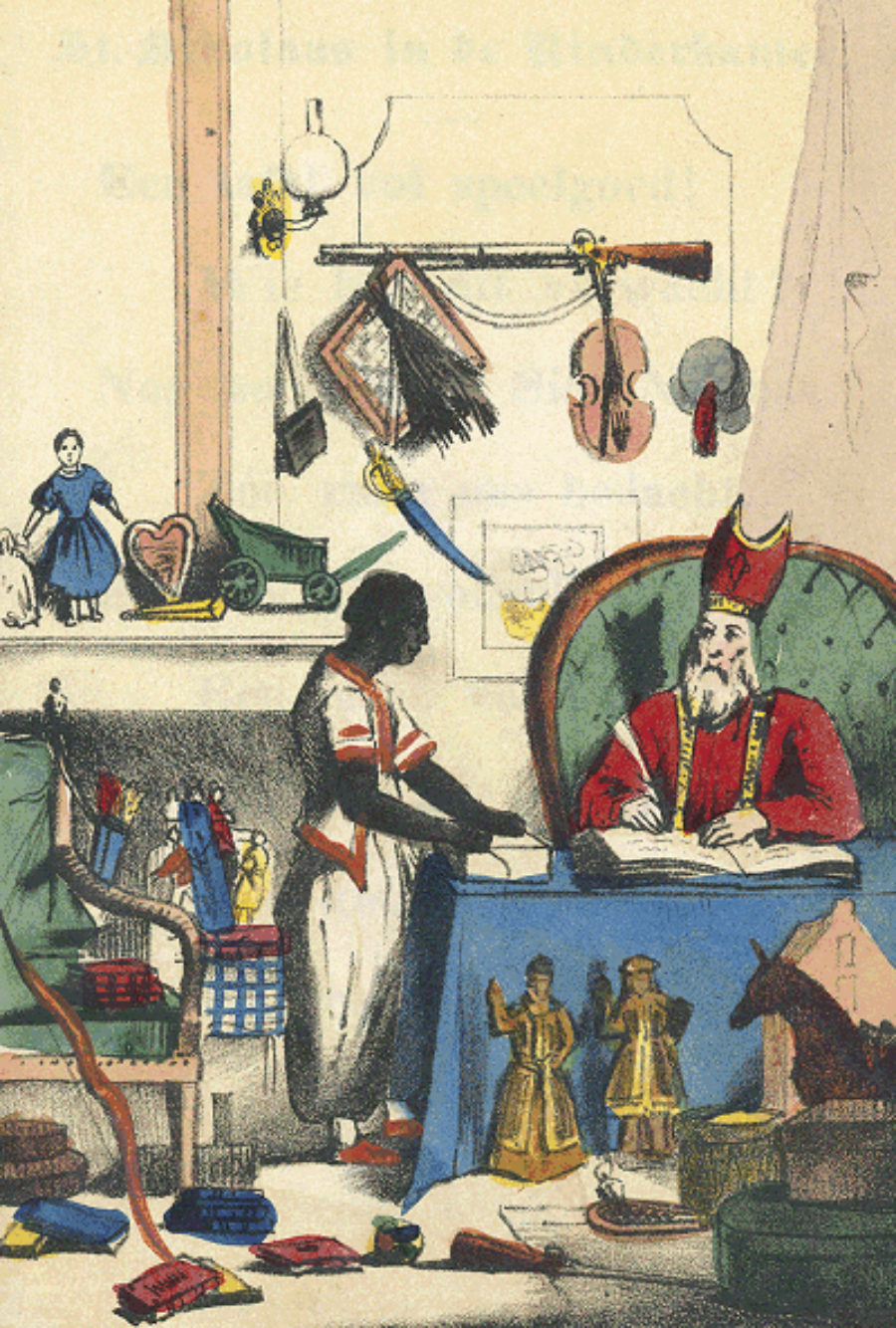 One of Pete’s older lineages is that of a helper, servant, or slave. As such, he may have his cultural roots in the old Germanic god Odin’s (or Wodan’s) information-gathering ravens; in medieval European portrayals of African ‘Moors’; in the African or European ‘boys’, pages, who used to serve as personal assistants to wealthy aristocrats; or in the collective memory that the eighteenth- and nineteenth-century Dutch put to work large numbers of enslaved African Americans, which fact is echoed in the way the present-day Nicholas captains the many Petes on his steamer. Each of these cultural motives may have played a role in the shaping of Pete’s present role.

His second lineage is specifically Christian. It goes back to the stories of the Christian saints and angels and their struggle with Satan. In this case, Pete is a vanquished demon, former antagonist to the victorious Saint Nicholas. On older drawings and paintings, the archangel Michael might hold just such a demon by a chain, for instance.

Both images resonate with present-day depictions of Pete when we see him appear at the side of Saint Nicholas. And both histories offer fundamental reasons to question the appropriateness within a European context of shaping Pete as a character with African roots. Pete can also appear on his own, however. One instance of this can be found in the most curious of places: the poet W.B. Yeats’s collection of Irish folktales from around 1900. 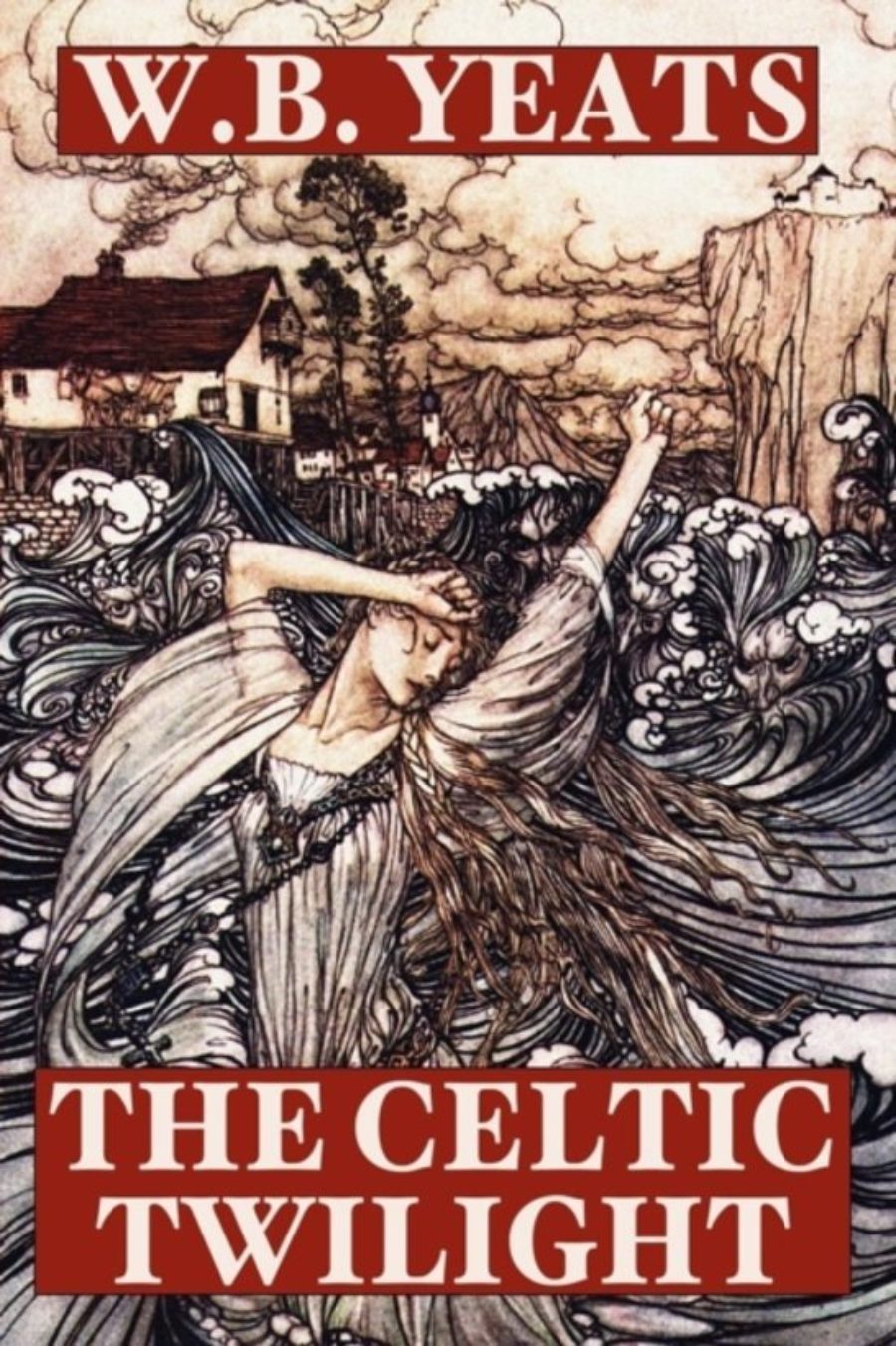 The Celtic Twilight by W

In The Celtic Twilight, Yeats gathers tales which he had heard told by others in his native country, but also fairy-tale-like experiences which he had had himself. In one such short sketch, he explains how he would sometimes get waking dreams, some of which involved witnessing various people’s personal hells. He writes that he ‘saw in one [of these hells] an infernal Peter, who had a black face and white lips, and who weighed on a curious double scales not only the evil deeds committed, but the good deeds left undone’.

Now Yeats’s aim was to write about a specifically Irish world of fairy, but he was also a European, living around the turn of the twentieth century, and he must therefore have been familiar with the habit of white entertainers of that time to put on blackface. His image of this Peter, with its black face and white lips, clearly resembles these entertainers. It is hard to imagine therefore that theatrical blackface types did not influence his portrayal of the infernal character he writes about. Yet other traditions also played a part in his waking dream.

'Black Pete’ was not just the name of Nicholas’s helper in the December festivities, but also an old Dutch and German name for Satan

His Peter is a judge, someone who weighs people’s souls as they enter the world of the dead. Still, I have been unable to find a more common usage of the name ‘Peter’ for either a devil or devil-like judge, or for a character in blackface in anglophone culture at the time. It almost looks like Yeats has taken on German or Dutch terminology in this Celtic story. After all, ‘Black Pete’ was not just the name of Nicholas’s helper in the December festivities, but also an old Dutch and German name for Satan, or for the figurative black sheep, a person who takes the blame. An unfortunate, devil-like figure also gave the name of ‘Black Pete’ to a popular card game (known as Old Maid in English) which, as it happens, carries the same name in the Scandinavian and various Slavic languages: plenty of opportunity, in short, for Yeats to have got wind of the name and it connotations somewhere. 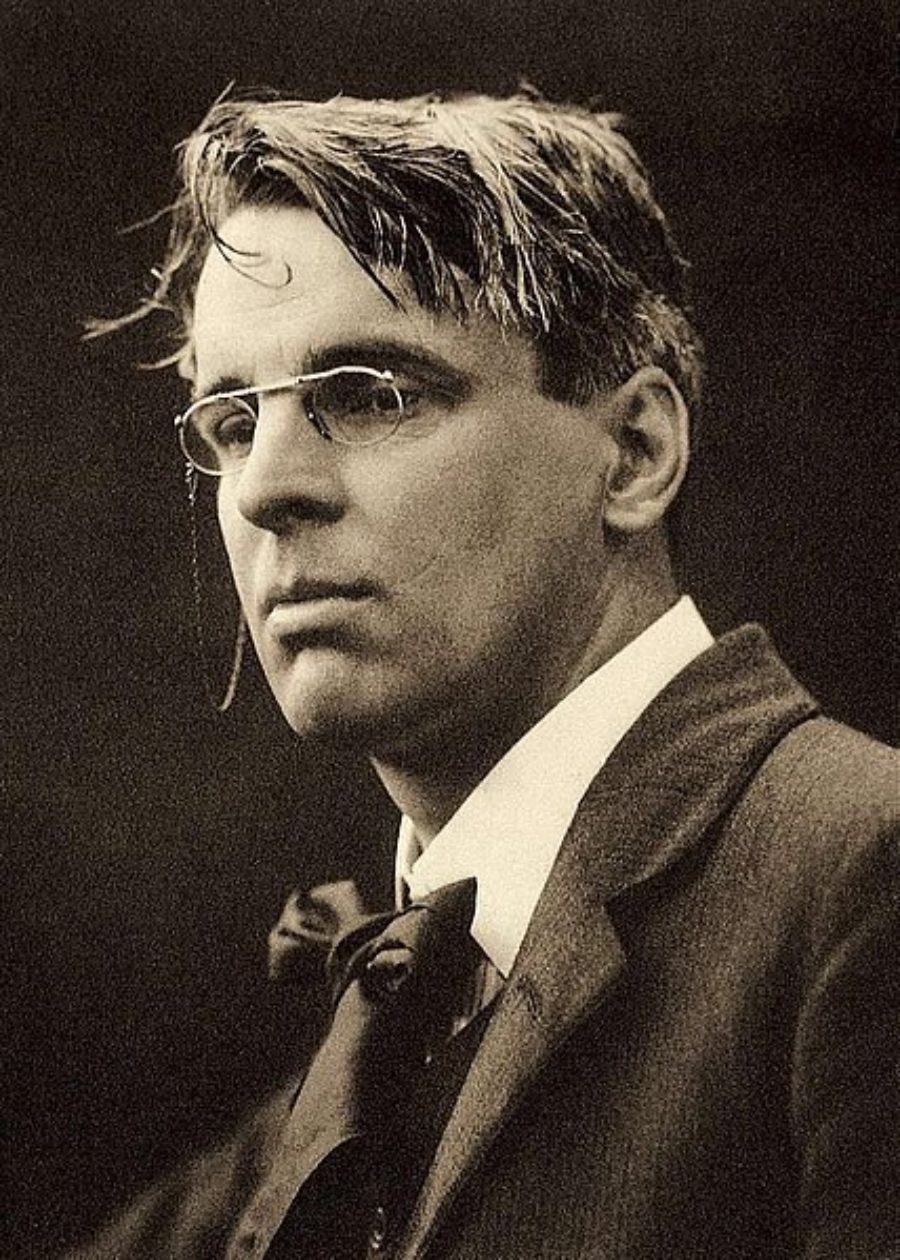 What is significant about Yeats’s depiction of Pete, however, is that it unifies the double aspect of reward and punishment. His moral scales may go down, which would no doubt be followed by a warm welcome into his abode; or they may stay up which, it is implied, offers more favourable prospects. A far cry from either servant or subjugated devil, this Pete is a godlike person more than anything. This fits into parallel traditions that portray a solitary Nicholas, without any assistance, who similarly evaluates people’s good as well as their bad deeds in frightening disguises. We see such Nicholas traditions in more localised Dutch rituals such as Klozum, for instance. Whether we think of such figures as ‘Nicholas’ or as ‘Pete’ seems less important. What matters is the fact that one figure unifies both potentially beneficent and threatening sides of the celebration. (Perhaps not coincidentally, Nicholas or Nick is itself another one of Satan’s nicknames.)

Yeats’s figure thus suggests that a blackface Pete may have been more widespread in Europe than just appearing in the Low Countries. Perhaps even more importantly, it also offers a significant variation to the tale: Peter takes centre stage in this version of the story. Without Nicholas’s assistance, he judges the souls that come to him. He is a god or devil with the power of Christian moral judgment, rather than Nicholas’s helpmeet and sidekick. A bogeyman, still, but a godlike one. We might have here one potential avenue for reforming the Low Countries’ annual festivities. I could picture local celebrations entirely centred on Pete, for instance: who needs the Saint? Or Pete and Nicholas visiting Belgium and the Netherlands in alternating years, to avoid either of them getting overworked. Or perhaps one day we will find Pete and Nicholas locked in fierce debate over whether a child has been good or bad that year.

The Netherlands Is Working on a Shared Future for Shared Heritage