A Versatile Renaissance Artist from Brussels

By An Faems, translated by Louise Snape

Bernard van Orley (c. 1488-1541) not only painted large polyptychs and altar pieces, he also created intimate, small-scale devotional works, as well as designs for tapestries and stained glass windows. You still have until 26 May to visit a beautiful exhibition at Brussels’ BOZAR, which features this celebrated, multi-facetted, and innovative renaissance artist who was commissioned by the likes of The Holy Roman Emperor Charles V and Archduchess Margaret of Austria.

An impressive, classical-style building with enormous pillars and a dome crashes down under a black sky filled with devilish creatures. The festive meal taking place inside is being rudely interrupted. The dinner table has fallen over; in the foreground wine has spilled on the ground. In panic, some of the guests are trying to escape, while others have already come to a dreadful end, crushed under the falling debris.

This dramatic scene depicts one of the trials faced by the Old Testament’s Job, when he lost his ten children all at once. This makes up the centre panel of the Job and Lazarus Polyptych, and is one of the highlights of the exhibition that BOZAR dedicates to Brussels painter Bernard van Orley (c. 1488-1541). 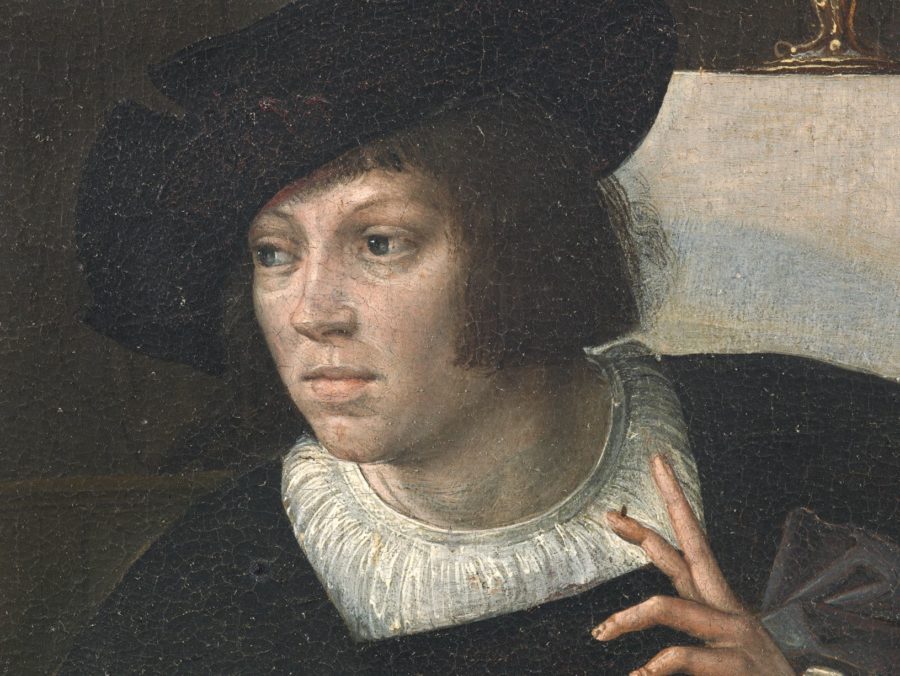 Van Orley was a multi-facetted and remarkably successful artist. Largely forgotten over the course of the twentieth century, he was very highly regarded in his time, as well as in the centuries that followed. He had important patrons, including The Holy Roman Emperor Charles V and Archduchess Margaret of Austria. He was also the foreman of a large studio in the area of Sint-Gorikswijk, in the centre of Brussels.

In the twentieth century Van Orley was largely forgotten, but he was very highly regarded in his time

The Job and Lazarus Polyptych is testimony to the innovation that Van Orley brought about in The Netherlands, and was inspired by some of the great German and Italian renaissance masters like Dürer, Rafaël and Mantegna. In addition to the classical building that forms the backdrop for Job’s children’s unfolding drama, the size of the figures is notable, as is the dynamism of the situation and the expressiveness of the faces. On top of that, this polyptych displays a certain self-confidence – the careful viewer recognises not only the painter’s name, his motto and coat of arms on the central panel, but also a self-portrait on one of the side panels.

The early work in the first room subtly sets the tone. The altarpieces with their surprisingly rich colours are still rooted in the tradition of the Flemish Primitives. The figures are rather static and different episodes appear on the same panel. That said, the scenes are held in particularly detailed and elaborate frames, decorated with grotesques and antique ornaments. Movement at the entrance of buildings is suggested by people entering or leaving.

Now and then, this delivers a touch of humour, like in The Virgin and Child, adored by Saint Martin and other Saints. Here, a monk enters a room in which the Virgin Mary and the Saints are to be found, and his foot is almost frozen mid-step. His face is even hidden behind one building’s pillars. Animals also sometimes create a playful element in his work. 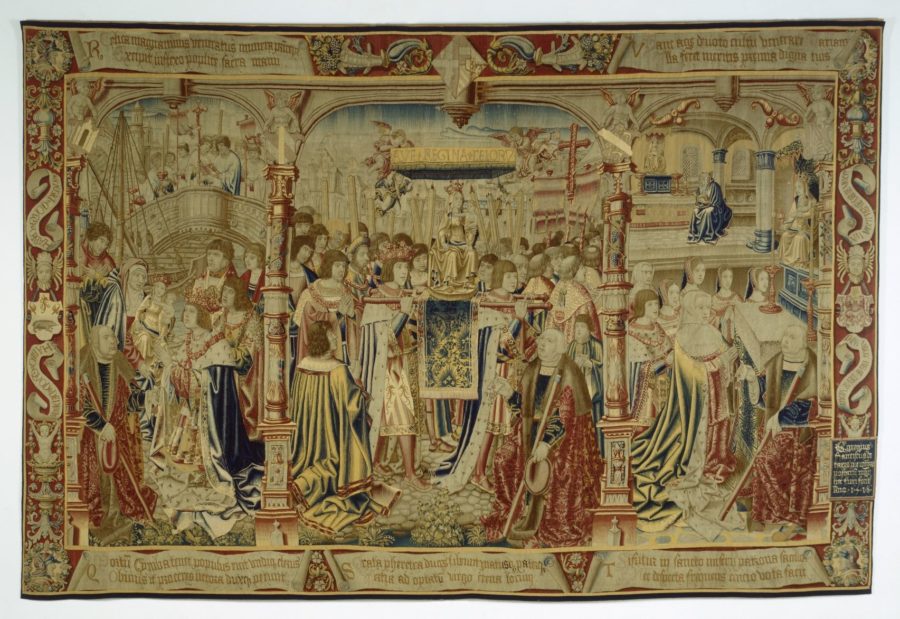 Bernard van Orley, Legend of Our Lady of the Sablon: The Statue of the Virgin Welcomed with Grand Pomp in Brussels, 1516–18 © RMAH, Brussels

Bernard van Orley was not only a painter, he was also a highly regarded tapestry designer, for which he created templates. Since the 15th century this had been exclusively the job of master painters in order to ensure their quality. Van Orley’s early religious tapestries also include a series on the legend of The Church of Our Blessed Lady of the Sablon.

The clear connection to Brussels is notable in one of the tapestries in this series, featured in the exhibition. But the life-sized figures of Philip the Fair, the young Emperor Charles V and Archduchess Margaret of Austria also catch the eye - even though historically they have nothing to do with the legend of the miraculous statue of the Virgin Mary. 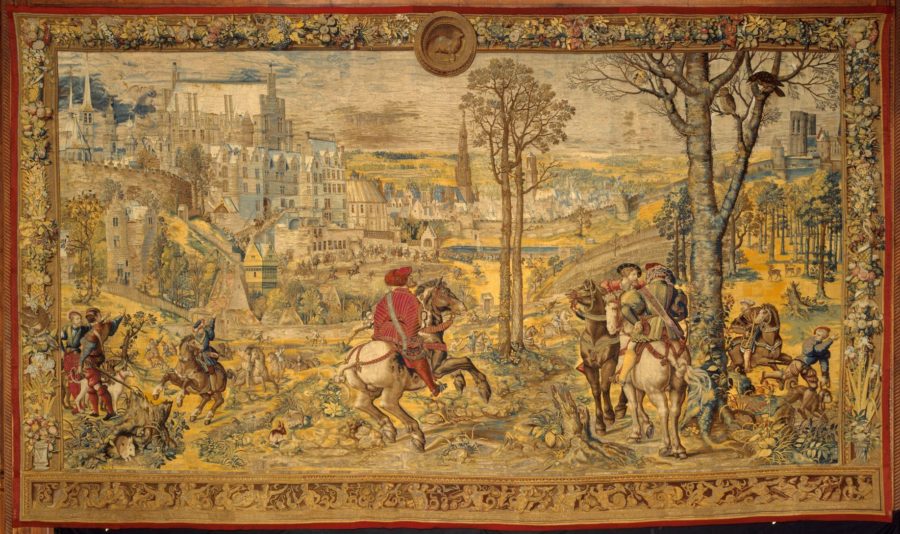 Brussels and Charles V also appear prominently in a tapestry part of the 12-piece series, Hunts of Maximilian, which depicts a hunting scene for very month of the year. In the tapestry for March, which has been brought to Brussels from the Louvre, we see Charles V on a rearing horse, an unprecedented image that was later taken up by Titian. The background is a panorama of Brussels, with Coudenberg Palace, Brussels Park, the town hall and today’s cathedral clearly recognisable.

The devotional works and portraits contrast sharply with the imposing tapestries

The full series is about 73 metres in length and more than four metres high. This is art on a grand scale, in the truest sense of the phrase. The tapestries exude immense luster by virtue also of the generous amounts of gold and silver thread woven into them. One almost laments the fact that there is no light breeze drifting through the rooms, which would accentuate the tapestries shimmer even more.

BOZAR’s exhibition only offers a sample menu of the tapestries designed by Van Orley. Those who want to fully experience a caemer van tapisseryen (room of tapestries) experience should visit the Brussels Art & History Museum, which houses nine of his tapestries – eight of which form a series about the Biblical patriarch Jacob. 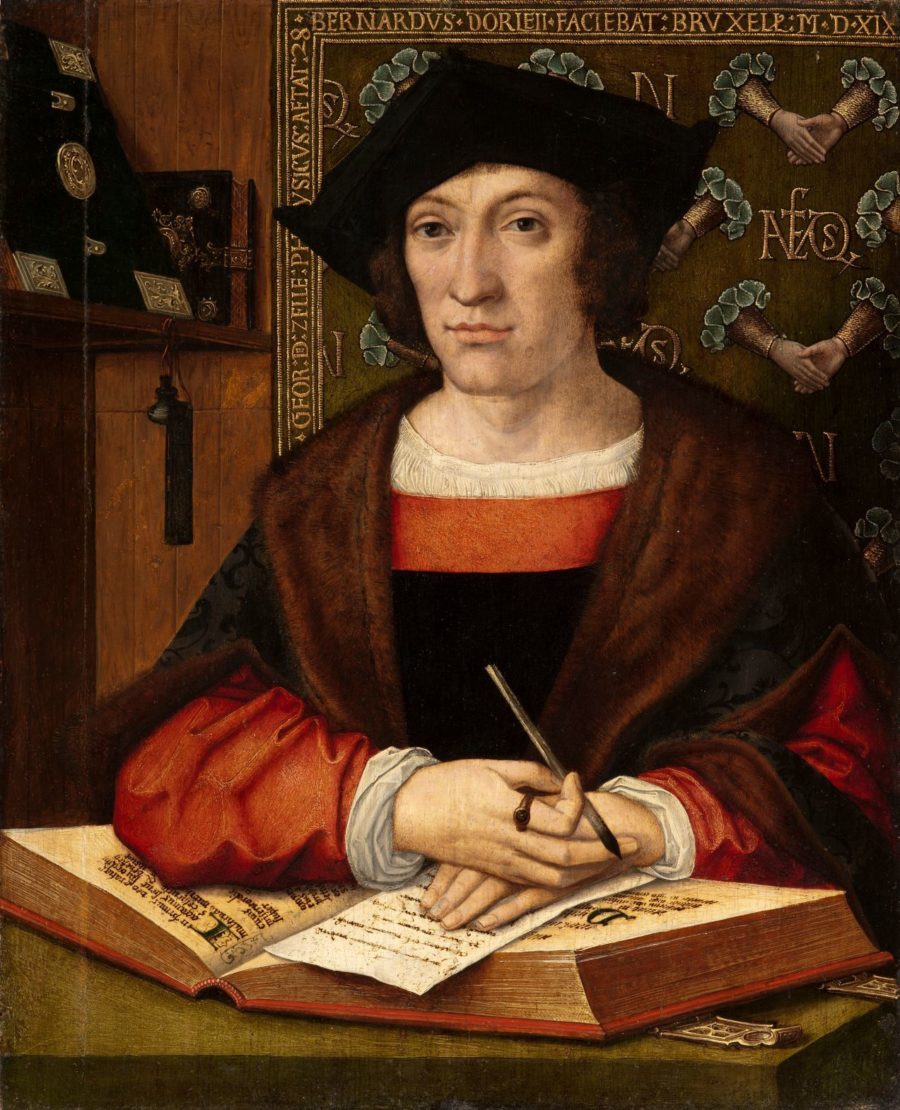 The rooms displaying the devotional works and portraits contrast starkly with the tapestry rooms. These intimate, small-scale works were commissioned by individuals who aspired to have a court artist’s work in their home.

Even in these small paintings, the painter’s ambition is clearly perceptible. The portrait of his next-door neighbour, Georges de Zelle, a city doctor in Brussels, seated in his study, is reminiscent of the humanistic portraits of Erasmus and Pieter Gillis.

The painting of the Holy Family, part of the Louvre’s collection, places the Virgin Mary, Joseph and the baby Jesus in renaissance architectural surroundings, with a naked man standing on a pillar to their left. The figure of Joseph is inspired by Albrecht Dürers’ portrait of a 93 year old man. Van Orley knew Dürer personally and the artists were influential to one another. 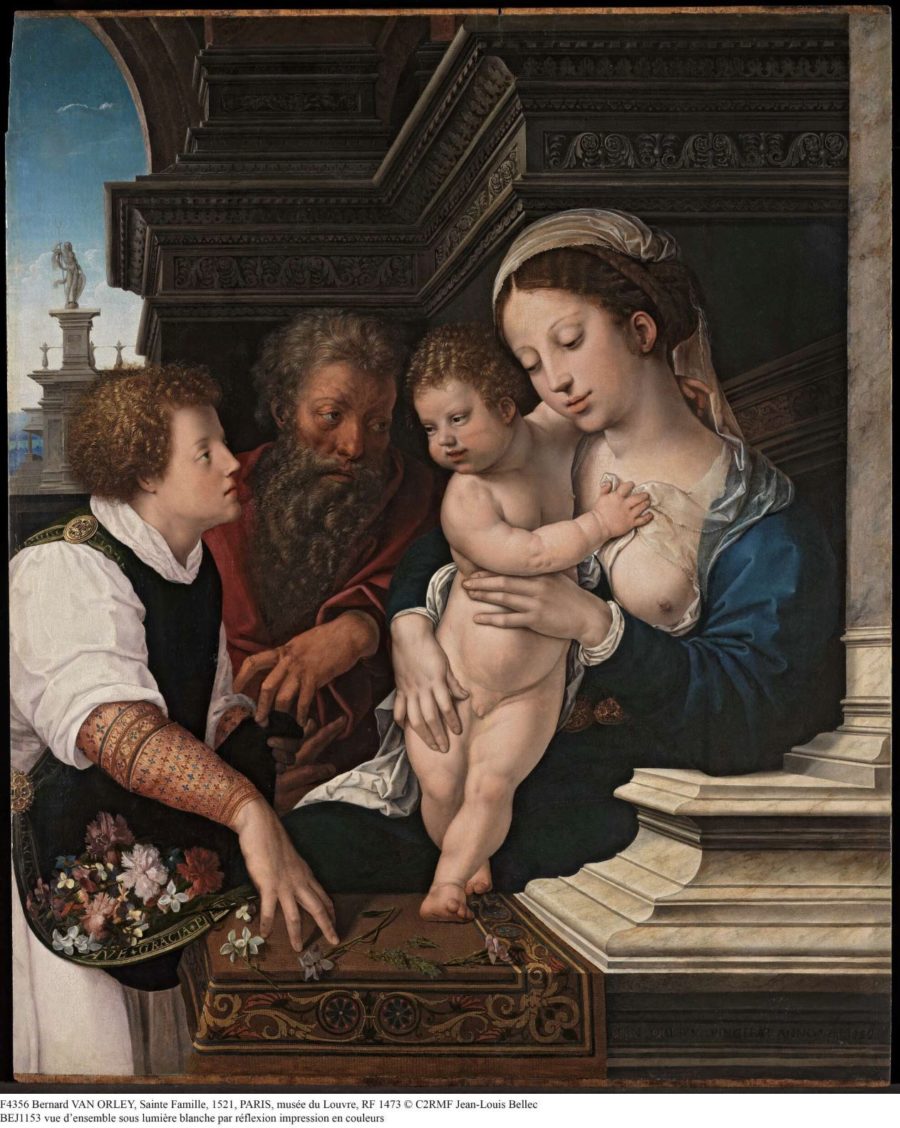 Bernard van Orley’s oeuvre also includes stained glass window design. There are only a few fragments on show at BOZAR, but The Cathedral of St. Michael and St. Gudula is only walking distance away, and is home to a number of examples of his work. Creating an imposing impression must have the been the main aim behind the design for the monumental window found in the northern transept. It depicts a praying Charles V and his wife under a triumphal arch, flanked by his patron saint, Charlemagne. Similar to the tapestry depicting the legend of The Church of Our Blessed Lady of the Sablon, the historic figures are presented as much larger than the worshipped saints.

Bernard van Orley worked together with specialist studios to create his tapestries and stained glass windows, but he was also able to find collaborators for his paintings, who would bring his designs to fruition. The exhibition therefore rightly pays attention to the (independent) work of a few of these collaborators, illustrating how this innovative artist from Brussels created a whole school.

Bernard van Orley. Brussels and the renaissance, Centre for Fine Arts in Brussels, Brussels (BOZAR), until 26 May 2019.