Between Humans and Atoms. H.A. Lorentz, Spiritual Father of Einstein

Thanks to two biographies published at the same time, the Dutch physicist and Nobel Prize winner Hendrik Lorentz, who is remarkably unknown, particularly to non-naturalists in Flanders, finally gets the attention he deserves.

Both books start at the funeral of Hendrik Lorentz in Haarlem. On 9 February 1928, the physicist receives something that resembles a state funeral. Behind the coach with the coffin of the 74-year-old deceased is a carriage full of floral arrangements and wreaths, followed by a procession of carriages with relatives, dignitaries, and the crème de la crème of international science. 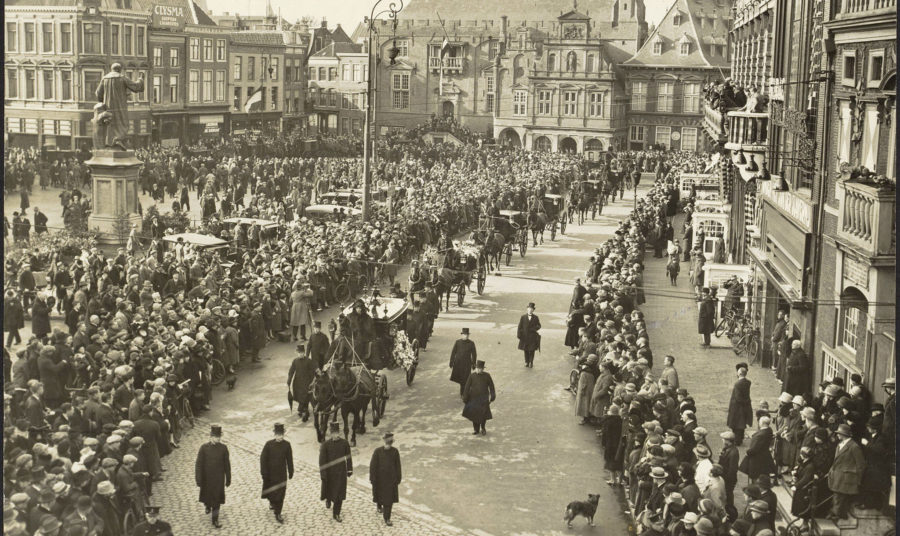 In addition to representatives of the royal family and the government, there are rectors and honourable colleagues such as Lord Rutherford, Marie Curie, Max Planck, and Albert Einstein. The railway put in extra trains to the ceremony and, in honour of the deceased, the telegraph service was shut for three minutes. All newspapers devote extensive attention to the man and his work. In 1912 already, the mathematician and writer, Robert Musil, had given Lorentz a place in the list of Mach, Einstein, Minkoswski, Peano, and Russell, the men of science from whom we could learn, while we could forget Goethe and Hölderlin. A century later, many streets and squares, and quays and schools that are located in the Netherlands, are still named after him.

According to one of the biographies, it was a beautiful winter’s day, as the sun showed itself from time to time, and nature took part in the overwhelming tribute that befell the deceased, while the other described it as a grey, bleak day with occasional drizzle. The differences between Lorentz by Frits Berends and Hendrik Antoon Lorentz by Anne J. Kox are clear from the opening paragraphs. The first is more floral, elaborate, and detailed, while the other is more sober, sleek, and sad, both ending with many pages of notes, references, and sources.

Berends (emeritus professor of theoretical physics in Leiden, a distant successor of Lorentz there) and Van Delft (former director of the Rijksmuseum Boerhaave in Leiden) use more than twice as many words as Kox (emeritus professor of History of Physics at the University of Amsterdam) because of the abundance of details and elaborations. As official deliverer of Lorentz’ collected works and correspondence, Kox had been working on his biography for forty years when Van Delft retired and then found the time to create what he had long been desperately missing: a biography of the iconic Leiden theoretical physicist who won one of the first Nobel Prizes and was a friend and spiritual father of Einstein. 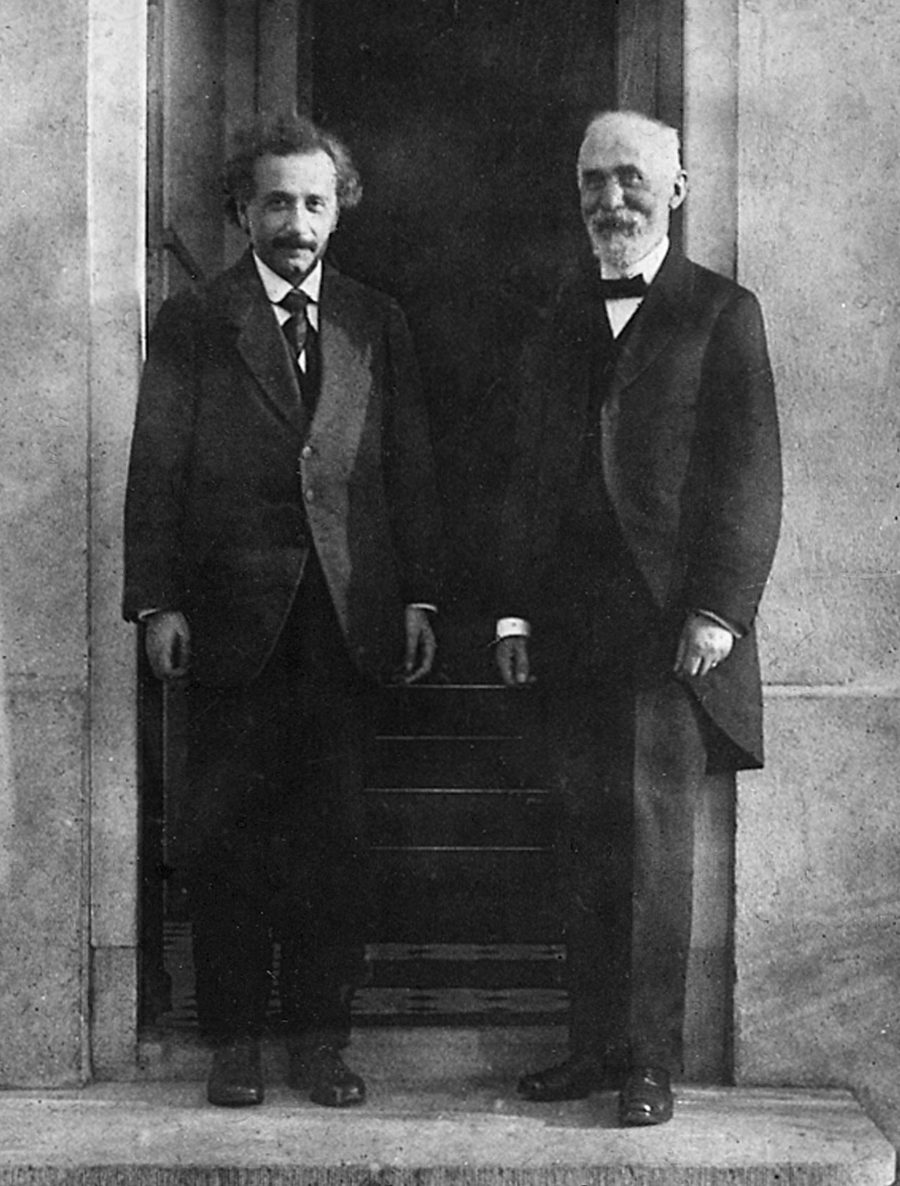 Friends and colleagues: Einstein and Lorentz in Leiden, 1921 © Wikipedia

There is no doubt that Lorentz’ contributions for science and his country are great. Although he didn’t make any spectacular discoveries, he is considered to be the pioneer of the theory of relativity. He was the first to describe an electrically charged subatomic particle, that would later be called the electron. In 1901, he received the Nobel Prize in Physics for this.

The electron theory led to clarity of thought in electromagnetism, the intellectual legacy of James Clerk Maxwell, in which many questions were still left unanswered. It led Lorentz to contemplate light as an electromagnetic phenomenon and to mathematical equations that still live on in physics textbooks, such as “Lorentz contraction,” “Lorentz transformations,” and “Lorentz force.” By now, these concepts have gotten different meanings than those Lorentz himself gave them. For him, they were thought-instruments, indispensable for his central insight: the “weighable matter” is completely separate from the “aether,” in which those electromagnetic phenomena occur. The ether was an important ingredient of the nineteenth-century physics, the substance that fills the entire space and serves as a carrier of, among other things, light waves.

Interestingly, it was precisely Lorentz’s consideration that created the frame of mind for Einstein to declare the ether superfluous in 1905, thanks to a revolutionary reinterpretation of space and time. In spite of all his sincere admiration for Einstein’s two theories of relativity, Lorentz was never willing or able to take that step himself. Throughout his life, he also maintained an ambivalent attitude towards the new quantum mechanics, although he gave esteemed lectures about it. The difficulty Lorentz had in understanding the new theories is not surprising. In the end, the physical world view is not yet satisfactorily completed in 2020, and many of the questions of that time still remain.

These questions were already addressed at the now-world-famous Solvay Conferences (“Conseils Solvay”), the first of which took place in the autumn of 1911, at the Brussels Hotel Métropole under the chairmanship of Lorentz. It was the first time that a strictly selected summit of a scientific field met in small groups to discuss the core problems at the borders of the discipline in an informal atmosphere. This Solvay conference was only possible thanks to the enthusiastic patronage of industrialist Ernest Solvay, the inventor of a new process for the manufacturing of soda ash, which he and his brother Alfred had made a commercial success. With the fortune of the international chemical company, he wanted to support science and provide a forum for discussion of the pressing problems in physics and chemistry. Lorentz was elected chairman because he was widely respected, spoke several languages, and came from a neutral country – international tensions in the run-up to the First World War were already playing a background role. 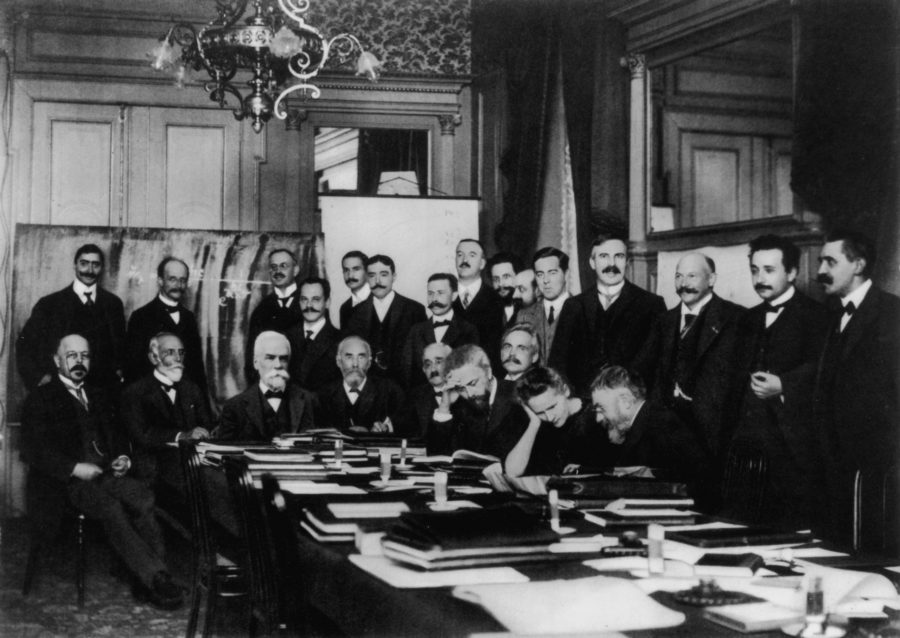 The first Solvay Conference was held in 1911 at the Brussels Hotel Métropole under the chairmanship of Lorentz. © Wikimedia Commons

The first Solvay Council raised more questions than it answered. Solvay could only encourage this and gathered a second Council in 1913. Despite the war, Solvay, under the chairmanship of Lorentz, founded the Institut de Physique. The institute was a novelty far ahead of its time: independent, international, and accessible to all with a good research proposal, with the inclusion of women, at the insistence of Lorentz.

Lorentz would chair the first five Solvay Conferences (as they eventually became known, they are still being held). The fifth, in 1927, has now acquired mythical status. Of the twenty-nine participants, seventeen had a Nobel Prize in their pocket or it was on its way. Lorentz’s intelligence, tact, and perspicacity commanded respect from everyone and led the discussions about the new quantum theory in the right direction.

After the First World War, Lorentz played a connecting and reconciling role in the torn European sciences

After the First World War, he also played – in fluent German, French, and English – a connecting and reconciling role in the torn European sciences that grouped together in the Counseil International des Recherches. In the meantime, he also chaired numerous state commissions in his own country, including those for the closure and reclamation of The Zuiderzee. Internationally, he made an impression as a member, and later president, of the Commission Internationale de Coopération Intellectuelle (the predecessor of UNESCO). The biographers can only be astonished at Lorentz’s dedication and effort, which combined academic and diplomatic work, including many trips to Paris, Brussels, and the United States.

Again and again, the many reports, letters, and testimonies show how much impression Lorentz makes as a clear thinker with a phenomenal memory that, moreover, understood the art of explaining the most difficult things insightfully and compelling, even to a lay audience. This certainly contributed to his popularity; the comparison with Robbert Dijkgraaf is made several times. 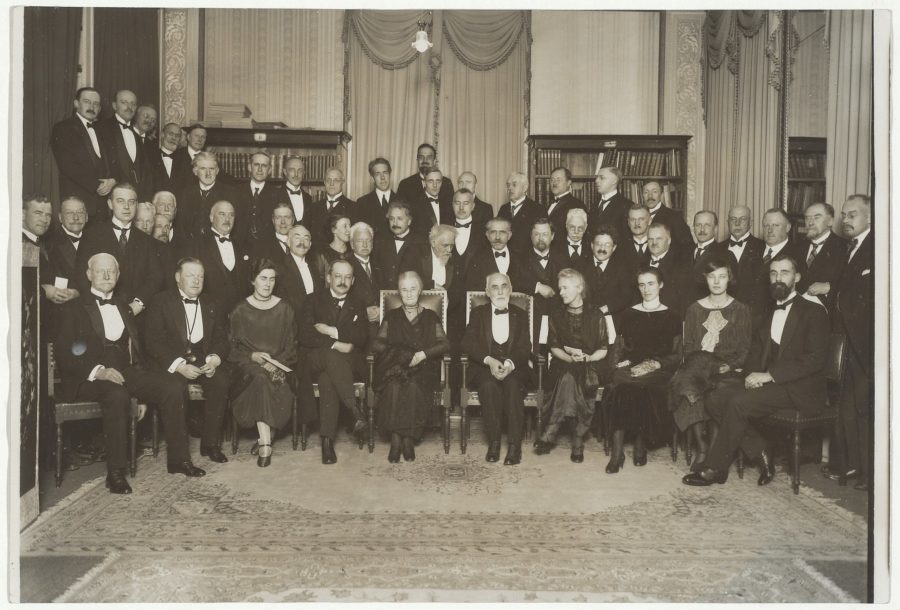 Celebration of Lorentz at the golden jubilee of his academic promotion on 11 December 1925. Among the guests are many internationally renowned physicists, such as Marie Curie, Niels Bohr, Arthur Eddington and Albert Einstein. © Wikipedia

The biographies not only tell the story of a full life; they show what science was like a hundred years ago. The strictly academic and organized activity in an ivory tower full of men in three-piece suits of that time is a thing of the past. By the way, Lorentz is the first professor in Leiden that had female PhD students, including his own daughter Berta.

No matter how captivating and brilliant he was, he also was a bit boring

The question remains as to which of the two books you would like to read when you don’t have enough time to work through both of them. Kox is a bit stricter, Berends-Van Delft a bit more flamboyant. One focuses more on the scientific merits and is a bit more technical, the other takes more of a contemporary perspective and tells more amusing anecdotes. One is barer and more frugal, the other loses itself in details. One concentrates on the person and his theories, the other gives much more of a social context, such as family and municipal problems, educational reforms, or academic appointments.

However, both stories struggle with the same problem: they are only held together by the chronology of events and lack a conclusive basic idea. Perhaps this is also because Lorentz’s personality does not come to life anywhere. No matter how captivating and brilliant he was, he also was a bit boring. It did not help that Lorentz’s committed and emancipated wife Aletta destroyed three packets of letters after his death. Perhaps there was some passion behind the captivating, balanced, reconciling, loyal, modest, righteous, but also – as these biographies say – aloof physicist.

We can only guess the doubt or the uncertainty, the frustration or the wandering that are part of every scientific quest. How and why Lorentz came to his ideas remains largely out of the picture. You would want to know how he continued to defend the existence of the ether, against the theory of his great friend Einstein, and how he could reconcile diametrically opposed beliefs.

Lorentz succeeded in bringing people together, despite contradictions of theory and practice, of nationality and ideology. As one in memoriam about him read, 'He served science, but above all, he served mankind.' Convinced of the importance of a shared quest for scientific objectivity, Lorentz transcended divisions, and perhaps that is his most important legacy for our time.