‘De Wateraap’ is a Fearless Ode to Nature

Biologist Elke wants to take the world by storm and revive the theory of the aquatic ape. But it turns out that in the end she has mostly been looking to find herself, her own unique form and identity. With De wateraap (The Aquatic Ape), Mariken Heitman has written a penetrating debut.

Suddenly, when she turns twelve, Elke feels embarrassed and betrayed. By her body ‘of bulges, growths, crying fits and dark, hostile hairs that creep like insects out of her white underpants’. She is shocked. All her life she had been hosting something, something she didn’t really want to be/come. ‘I evaded the body that was intended for me. Something was wrong with me.’ And her parents, who had not told her anything, they were a second betrayal. After puberty, Elke still continues to resist that mandatory metamorphosis into a woman. ‘Inside, someone else was waiting in the wings.’ 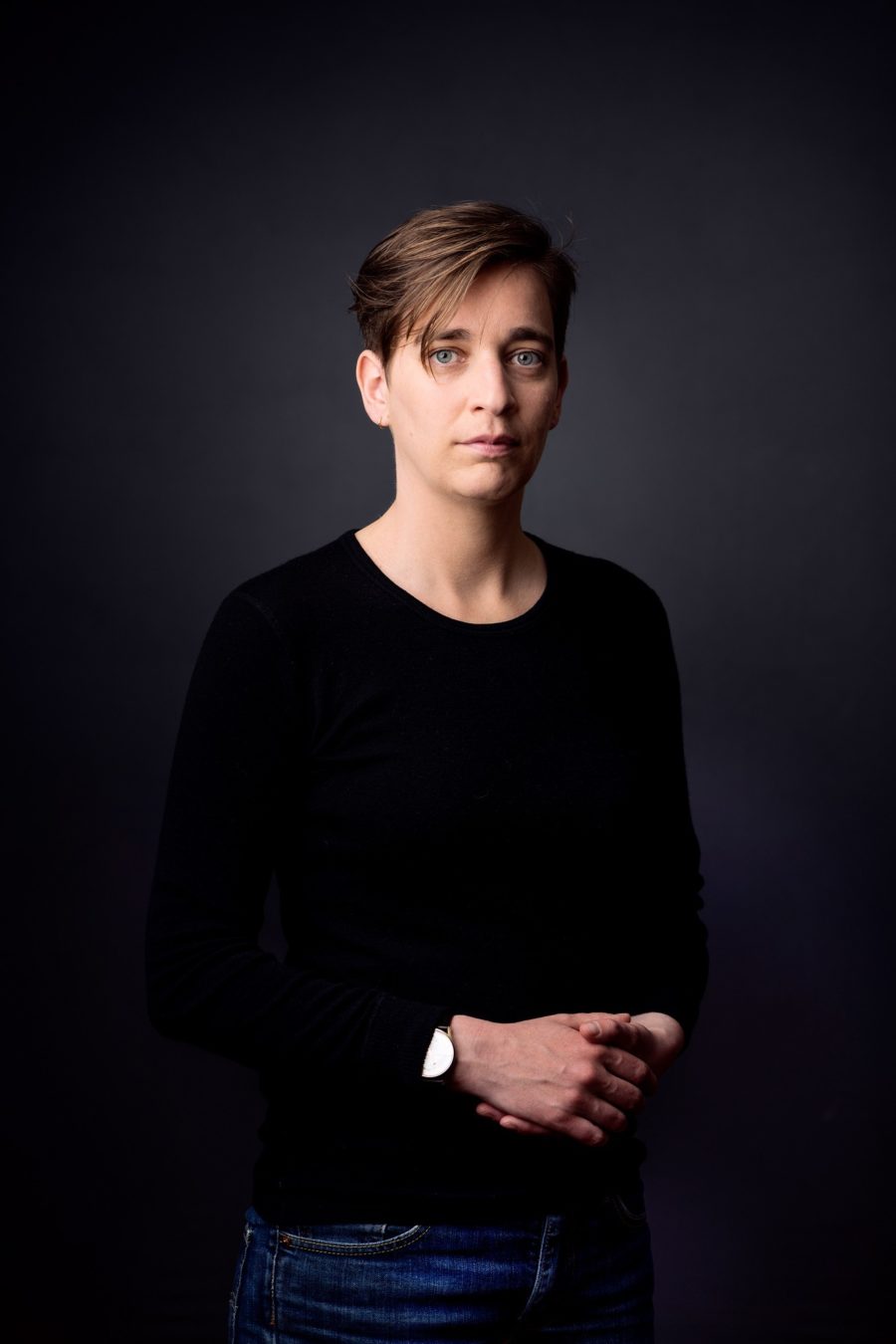 Her great-aunt Ko, a sister of her late grandmother, offers solace: each summer, Elke retreats to Ko’s farm on the water. Together they tend the vegetable garden and the hens, bury a fox (that they had first fed for a while with defrosted pet shop mice) and feed the compost heap, which takes on the air of a living being. So, naturally, Elke goes on to study biology. It is then that she becomes captivated by the missing link between ape and man in the theory of evolution. When she first reads about the aquatic ape, she feels certain: ‘This is about me.’

Her fascination for the aquatic ape takes her to Vienna. There she meets Lena, the professor who wrote the book about the aquatic ape, but she also meets a mysterious poet who pops up in different guises. Lena and the poet guide Elke in her inner quest, just as Ko had done. Elke hopes to convince Lena to revive the aquatic ape theory and to do so together, as revolutionaries. This plan does not succeed, but still they become allies, even if not in the way that Elke had hoped. 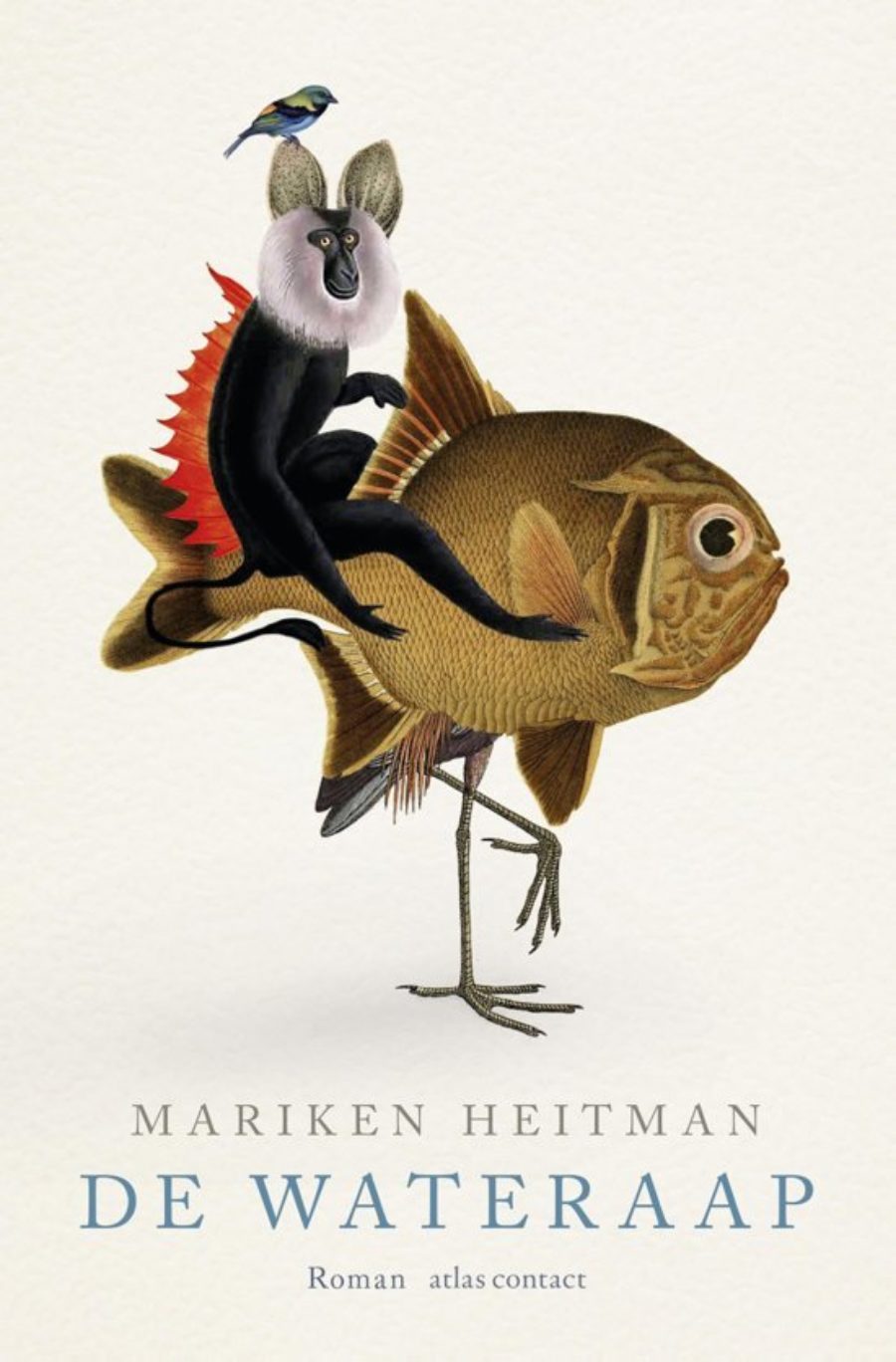 De wateraap is a fearless ode to nature. Nature, less bounded than our thinking, and which points out to us the incompleteness of our knowledge, especially about our lineage. A nature where creatures can adopt different shapes, can constantly change, resulting in fluid intermediate phases. Elke herself feels in a state of flux, if only she had been a caterpillar rather than a human, who could transform into a mosquito, a beetle or a butterfly! Although she is simultaneously looking for a place where she can feel at home in this age, in this world. Secretly, she curses her beloved aquatic ape, really all the misery began when he let himself be chased onto dry land.

Heitman tells Elke’s story in beautiful, poetic phrases full of inner rhyme and dreams, in a style that converges completely with Elke’s character. Occasionally, a metaphor may seem far-fetched, but Heitman’s narrative style is compelling and her language is rich and vivid. Beautiful words, sometimes obsolescent, make appearances, like ‘broes’ (spray) for a fine drizzle, then a ‘schonkige’ (scrawny) fox a little later.

‘I tried to reverse time’, writes Elke in a letter to Ko, who has just died, while it was actually her intention to write to Lena. Whether she succeeds in that tour de force becomes clear in a thrilling conclusion, a final, surprising twist in Elke’s search for her own unique identity.

Two excerpts from De wateraap, as translated by Paul Vincent

You don’t look at sleeping creatures, but you do look at the dead. Shamelessly. We found it in the morning, lying curled up as if it were asleep, simply become a thing. Ko put her hand to her narrow throat, as if she wanted to protect the grooves and folds, and said that it had now begun.

I looked away. She was talking to herself, not to me.

The fox belonged here. We fed it thawed-out mice from the pet shop that were like pink toys. We had started doing that after it had visited the chicken run one night. I went over there in the morning and the smell of ammonia, sharper than usual, hit my lungs. This was how fear smelt. I put the watering can and the tray of feed down in front of the fence and stood up empty-handed. They were silent, the cock and two hens, and they avoided the four slovenly heaps – it was their sisters lying there with broken necks. There were feathers sticking to the chicken wire, the earth was stained with blood in and the little sandpits where they took dust baths on sunny days, always moving backwards, there were wet faeces. It had only taken one, via a hole that we never found. It was only to be expected, said Ko in the kitchen.

We walked back together. One had launched itself in panic at the chicken wire, the imprints were stamped in its chest and its left wing hung down as if it belonged elsewhere. Ko picked up the chicken and took it with her to the bench under the pear tree. She stroked it with long movements, its body sprang back and the creature closed its reptilian eyes. The shadow lay across their figures like a crocheted rug. Ko put it on my lap. Few people know how a chicken feels, how little it weighs. Hollow bones. Around it there hung an aura of shit and straw and its heart beat softly against my thigh. I stroked its feathers, its claws relaxed. Ko went to the barn and came back with a chopper. It was the first time I had seen it.

The sound that the chicken made was a sort of cluck, half swallowed. I did not have to look away, Ko and the chicken had disappeared behind the barn. I stared at my toes.

Excerpt 2 – part of Chapter 6, Elke’s first meeting with Lena in Vienna. Lena is the researcher who wrote the book about the water ape (pp. 65-66)

I followed her up the stairs. We did not talk, and she never looked round. That was the kind of person I was, I always looked round, she was someone who knew you were still there. We walked through rooms containing stuffed bears, reptiles and birds, lots and lots of birds. Up here it was even quieter than with the butterflies. There were carpets and an artificial draught blew through the space. She waved her arm and beamed. We were looking at a massive skeleton on steel supports that was at least seven metres long, squeezed between an African elephant and a seal. A huge aquatic creature, as was apparent from its oblong, horizontally positioned body, the disproportionately small limbs and the heavy bones.

‘It became extinct, quite soon after it was discovered by the Westerners. Probably overhunted.’

This creature was not an intermediate form but a dead end.

She went over to the windowsill, I looked at her back. She sat down a long way away from me in a niche and was absorbed by the dark wood. Sea cows were related to elephants, they had a common terrestrial ancestor, but I couldn’t get any further than that. I focused on the ribs, which were as thick as human fists. I couldn’t manage to follow her down this wrong track.

There were legends, she told me, in which sea cows were human beings punished by the gods. In the past they were sometimes regarded by sailors as sirens. Not these, that is, but their smaller relatives that still live in the Caribbean. Manatees. For centuries people on different continents were fascinated by these mysterious beings. She came over to me. ‘Just imagine, Elke.’ She was standing close to me, and I could feel my name in her breath on my cheek. ‘The sea cow, like the water ape, had an ancestor on land. Both returned to the water. The big difference: the ape stayed. She put a hand on my forearm. She touched me.

Runner beans sprouted round my feet. Fat germinating leaves opened, above them pairs of heart-shaped leaves formed with in the middle slender, twining stalks which wiggled as they searched, stretched and grew longer, formed new leaves and reached my legs. In equal loops they wound their winding arms around my legs. I became covered with stalk and leaf. The blooming began on a level with my heart: red like fine drops of blood on a green wall. The tendrils reached my crotch, could go no further and branched sideways. They hung hesitantly in the void, from here there was no way back and with their curved arms they beckoned Lena.

She let go of my arm.

The spots dried up and fell at my feet. Flower moulting. But I had felt the hand, which had lain there for just a moment.

Patient or Therapist? The Boundaries Are Blurry in Siel Verhanneman's Debut Novel

Getting Used to Life After Loss with Judith Maassen