Crackling Skulls (De knetterende schedels), the much-acclaimed collection of short stories by the legendary author Roger Van de Velde, has been published in English for the first time. Who was this 'maverick of Flemish literature' who repeatedly found himself in prisons and psychiatric institutions? Biographer Ellen Van Pelt outlines his tumultuous life, while Jonathan Reeder recounts his experiences as a translator of Van de Velde's work. Roger Van de Velde was born on 13 February 1925 in Boom, Belgium. He caught the attention of Willem Elsschot, who took the young writer under his wing. Thanks to Elsschot, Van de Velde landed a job in 1947 as a journalist with De Nieuwe Gazet. Van de Velde’s journalistic range was impressive: he covered soccer, theatre, Antwerp gangs, Indian wolf children, Marilyn Monroe, and President Eisenhower. He was a razor-sharp critic of injustice and wrote bittersweet, compassionate items about tormented figures.

In 1948, after a performance at the Antwerp Theater, Van de Velde was rushed to the hospital with a gastrointestinal perforation. This marked the beginning of a prolonged medical ordeal, including numerous stomach operations. In 1958, doctors prescribed Palfium, a brand-new drug put out by Janssen Pharmaceutica. It was a powerful opioid painkiller, with no risk of addiction—according to the manufacturer. In fact, Palfium was found to be highly addictive and was soon placed under strict control. No doctors would continue to prescribe Palfium to Van de Velde, who by now was severely addicted, taking sixty tablets a day rather than the prescribed four. Van de Velde was caught forging prescriptions and was brought to trial. His lawyer pleaded insanity and after a consultation of just 25 minutes, a psychiatrist diagnosed Van de Velde as being ‘severely mentally unfit’, resulting in his incarceration in the psychiatric wing of a Belgian prison. He would spend six of the last eight years of his life behind bars.

Despite these bitterly harsh conditions, Van de Velde composed clear, sober prose. He secretly wrote his debut, Gallows Bait (Galgenaas), on the back of advertisement folders, rolled them up, and hid them in cigarette packets, which his wife then smuggled out with her. The book was widely praised in the literary world, but caused widespread panic among the Belgian authorities. That a manuscript by a psychiatric inmate could find its way to the general public was unacceptable, and Roger Van de Velde was banned from publishing and his typewriter was confiscated. The Belgian state had condemned a drug addict—neither criminal nor insane—to a psychiatric prison. Without treatment, without any hope of parole, without his typewriter.

And yet Roger Van de Velde continued to write, not cynical or embittered. Thanks to intervention by several fellow writers, the censorship was relaxed, and in his brief periods of freedom he was allowed to publish.

In Crackling Skulls (De knetterende schedels) Van de Velde depicts his compagnons de misère as men of flesh and blood: Daniel, who for consecutive three days smokes extra-long cigarettes on the instructions of Prometheus; Jules Leroy, who kills his beloved cat because he ate his roast beef; the Marquis de la Motte, who issues I.O.U.’s worth billions of franks. He illustrates their insanity with respect and compassion. Retrospectives of the life and work of Roger Van de Velde often, and rightly, call Crackling Skulls the high point in his writing career.

Petitions by fellow writers resulted in Van de Velde’s release from prison on 2 April 1970. On 7 May 1970, he received the Ark Award for the Free Word. On 3 June he was to check in to the Jellinek Addiction Clinic in Amsterdam for his long-sought-after treatment. He did not make it there. On 30 May 1970 Van de Velde died on an Antwerp café terrace of a Palfium overdose.

'A high point of my years as a literary translator'

Translators always hope that a project will either engage us and our readers, contribute something meaningful to literature, or shed light on a neglected author or bygone situation. Rarely does a book do all of these. But 'Crackling Skulls' was all this, and more. It is not just engaging, it is riveting; not just meaningful, but monumental; more than revealing, it is jaw-dropping. For me, translating these 'frescos from an asylum' - tragicomic portraits of inmates in a psychiatric prison - was a truly emotional experience. I was by turns appalled by the callousness of the Belgian correctional system of the 1960s, fascinated by the workings of a short-circuited mind, and more than once moved to tears by the simple helplessness of men on the fringes of sanity. My heart went out to the deaf-mute Séraphin, who pined for a faded magazine pin-up girl; Livinus, whose only wish was to have one last schnapps on his deathbed; and most of all Honoré, who tried his best to please the doctor by playing the trumpet. Tackling these twenty stories, told in a wry, insightful, at times baroque, and always compassionate narrative, was a high point of my years as a literary translator.

performing musician and literary translator from Dutch to English
www.jonathanreeder.eu 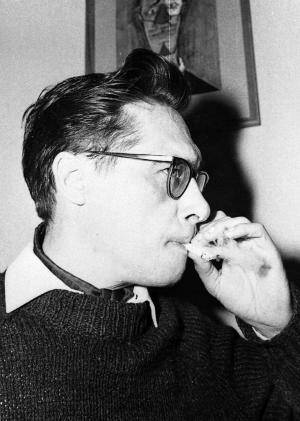