New Reference Work on Regional Languages in the Netherlands and Flanders

In the book Wie zegt wat waar? (Who Says What Where?) the reader is presented with a more accurate picture of the regional languages in the Netherlands and Flanders than in many other reference works. Dialect areas are less strictly demarcated here and reflect the increased interplay between regional varieties. And dialect maps show not only the classic variation in names of plants and food, but also the differences in more recent words like condom and fridge.

When you tell an outsider that you’re a linguist, they usually assume that you perform one of the following three tasks on a daily basis. First, you are supposed to spend your days debugging dt (T-rules) errors. Second, you are a walking etymological dictionary that knows the origin of every word in the Dutch language, and sometimes in other languages as well. For example, my father recently asked me about the etymology of the word ampersand. He had already developed his own folk etymology: corruption of en passant because two things connected with a (typographically) coordinating conjunction also happens to be metonymic at the same time. Sadly, that isn’t the case, nevertheless, it sounds wonderful. Third, you are expected to be able to place all dialect words of Dutch on a map and explain why one person says vis (fish) with a short <i>, whereas the other one says vies (dirty) (caused confusion during a recent family celebration with people from Limburg and Brabant).

For this last point, I refer them with great pleasure to the book Wie zegt wat waar? Regionale taal in Nederland en Vlaanderen (Who Says What Where? Regional Language in the Netherlands and Flanders), written by Veronique De Tier, Marjo van Koppen, Miet Ooms, Jos Swanenberg and Gunther de Vogelaer, and published by de Stichting Nederlandse Dialecten (Duth Dialects Foundation) and het Genootschap Onze Taal (Society Our Language). The book consists of three parts. In the first part, the regional languages that are common in the Netherlands and Flanders are discussed in quite a bit of detail: Frisian, Low Saxon, Limburgish, Brabantian, Flemish and Zeelandic, Dutch, and Utrechts. The second part contains a number of maps that represent lexical material, such as krentenbrood (currant bread) and sleutelbloem (primrose), but also oma (grandma) and frikandel (minced-meat hot dog) – convenient for when your mother asks you again whether the correct word is frikandel or curryworst (curry sausage). Each map is followed by an explanatory text with etymological data and further information. The last part provides an overview of the foundations, societies and centres involved in the dialects and regional languages in the Dutch linguistic area. Throughout the book, you will also find text boxes with additional information (for example on p. 105 about disappearing sleepwear after the map about “nightgown”) and interesting websites and databases that you as a reader can consult yourself, such as the Database of the Southern Dutch Dialects, the etymological database and the PLAND database (PLANt names in the Dutch Dialects).

The book is a pleasure to read and the maps and illustrations, made by Winifred Broeder and Josje van Koppen respectively, are clear and have an appealing design. As it was written by authors with a great deal of expertise, the book also offers extensive information about the regional languages of Dutch, and presents all this data to the reader in an accessible and well-arranged manner at the same time.

It is also great that the work considers a contemporary division of the regional languages in the Netherlands and Flanders, and connects this to the traditional dialects. In other dialectological work, you sometimes see a more classical classification of spoken dialects. This sometimes ignores the fact that social developments can lead to or have led to a mingling between varieties, and thus language exchange. The authors, however, have classified the regional languages in a way that reflects contemporary language culture. For example, in the section on Brabantian, it is made clear that the contemporary spoken language in large parts of Flanders is influenced by Brabantian and that Brabantian dialects are under pressure in favour of regionalects that are spoken in a larger area. Transitional areas are also given a lot of attention, as is clearly visible on an overview map (p. 11) that shows the areas as (overlapping) planes instead of as strictly bounded regions. According to the introduction, this is one of the things in which the work differs from traditional divisions of the Dutch dialects, where they like to work with strict boundaries. 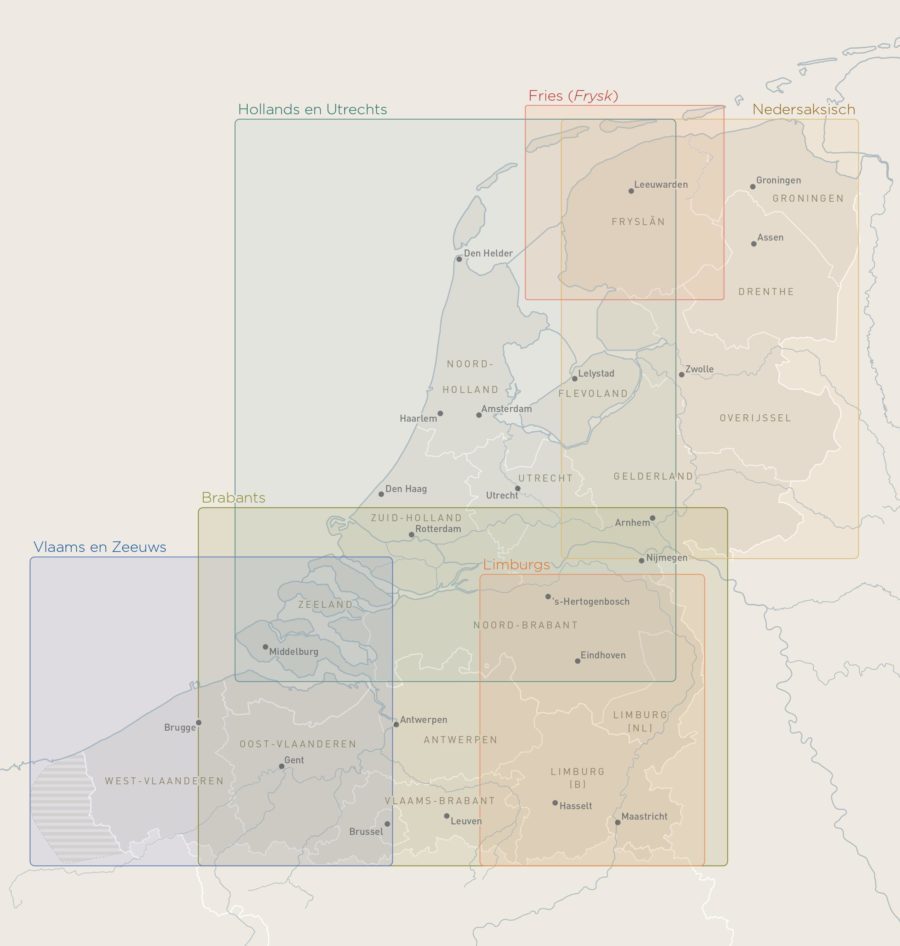 Survey map from the book showing the regional language areas as planes (with overlaps) rather than with strict boundaries. © Stichting Nederlandse Dialecten / Genootschap Onze Taal

The same idea, to provide a contemporary rendering of the spoken regional languages, also emerges in the second part of the book. The work has not only dialect maps that show the names of traditional dialectological concepts (such as plants and foods), but also a number of maps for concepts that have not been around for very long. You will find maps for the given names of ballpoint pen, a condom, and a fridge. As indicated in the introduction, you will find less language variation for contemporary concepts on those maps.

At last, the book pays attention not only to the linguistic characteristics that determine the regional languages and associated dialects, but also to the socio-cultural and social history of the dialects. In the description of Frisian and Low Saxon in the first part, for example, the history of the Germanic migrations (circa 500 AD) plays an important role. During these (and previous) migrations, the Frisians, Saxons and Franks spread over our linguistic area, which led to a linguistic area with dialects from different origins. Most dialects and regional languages are derived from the language of the Franks (for example Limburgish, Dutch, Brabant, and Utrechts), but in the north, the language of the Frisians survived (in Frisian) and in the east the language of the Saxony (as the Low Saxon regional language) persevered.

For Brabantian, Dutch and Utrecht, the authors go back to more recent, but still historical, social developments that have ensured that the regional languages have had a different influence on the development of the Dutch standard language. In Brabantian, the authors refer to the fact that, at the time of the development of the standard language (after the fall of Antwerp), many people from Brabant moved to more northern, Dutch places. As a result, the standard language, which was strongly influenced by the Dutch dialects and regional languages (such as the double plural kind – kinderen (child – children) instead of kind – kinder), and also by a number of Brabant characteristics. In the section on Limburgish, a different kind of social phenomenon is discussed: the position of the regional language and the influence of political decisions on it. While Limburgish still occupies an important position in the Netherlands, where a strong cultural dialect tradition exists and Limburgish is recognized as a regional language, its position in Belgium is much weaker.

Thanks to this information about the non-linguistic developments that underlie the evolution and contemporary status of the Dutch regional dialect and regional language map, the booklet is a valuable source of information for anyone who wants to understand not only who is saying what where, but also why the regional language sounds different in various places. 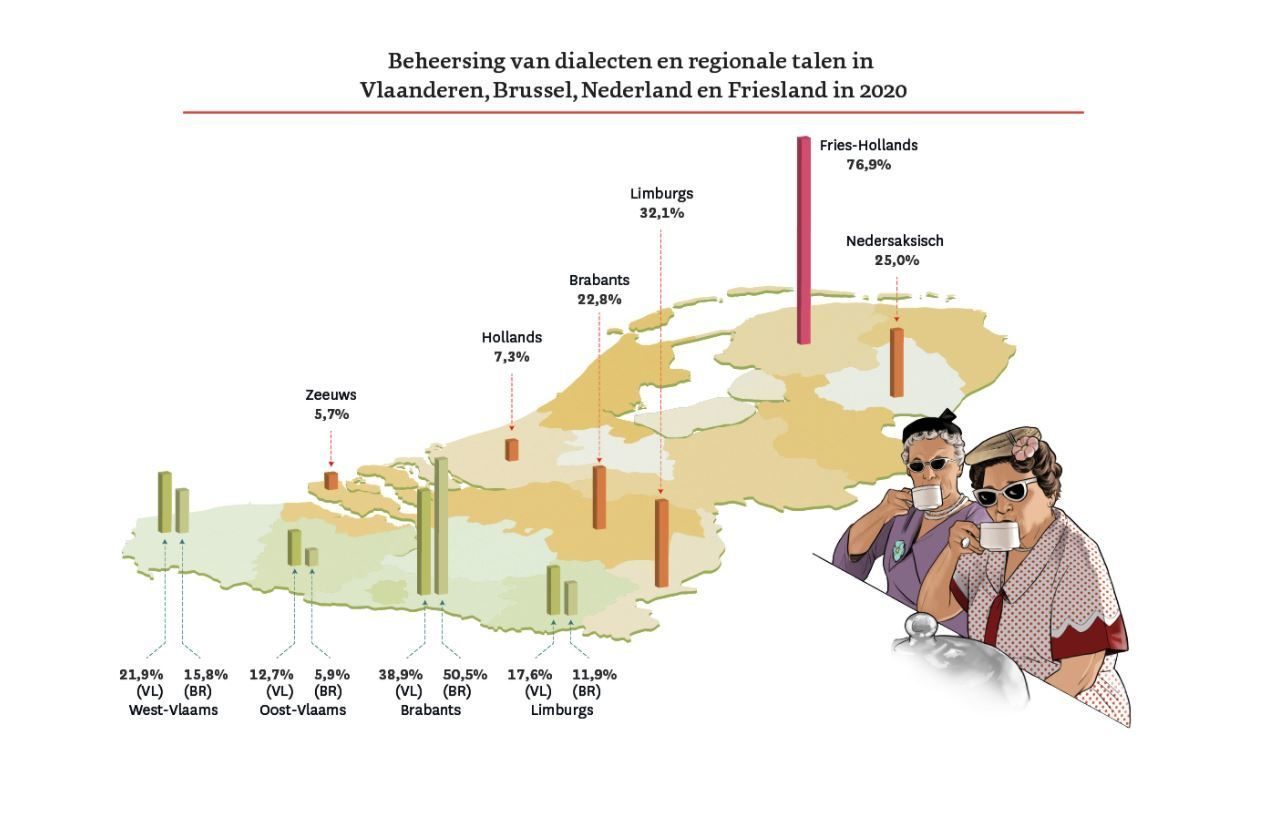 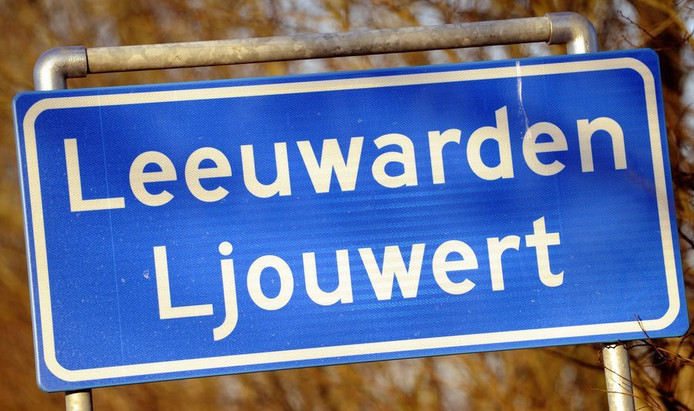