‘We will destroy them,’ said Bart De Wever, chairman of the Flemish-National Party N-VA, about the Belgian government. Dutch Prime Minister, Mark Rutte, was talking in front of the camera using the words ‘just shut up.’ The Belgians and the Dutch have heard plenty of violent language from politicians in recent months. What are the consequences of this coarsening of political language and debate?

‘Just shut your mouth when you’re sitting there.’ That’s how Prime Minister Rutte recently expressed his displeasure with the behaviour of soccer supporters who ignored the Corona rules, which prohibited supporters from raising their voices in the stadium.

Rutte’s coarse language did not go unnoticed by the opposition. ‘The use of language distracts from the constant shifting of responsibility,’ replied Lodewijk Asscher, foreman of the social democratic party PvdA. In hindsight, Rutte stated that he did think he shouldn’t have shouted, but supported the message nonetheless.

The Dutch Prime Minister’s statement is reminiscent of former Belgian Health Minister Maggie De Block (Open VLD)’s ‘stay home,’ statement made in March, at the beginning of the Corona crisis.

On September 21, one day after ‘just shut up,’ a wave of indignation arose on social media in Belgium about Bart De Wever’s ‘we will destroy them.’ He used these words in a highly viewed television talk show. In the same video segment, he spoke about his ‘blue colleagues’ (the liberal party) in a derogatory manner, and used terms as ‘get down on their knees’ and ‘open their mouths and swallow,’ in reference to the formation negotiations occurring at the time. Presenter James Cooke reacted indignantly (‘[c]ome on, this is not acceptable’), then the video was cut.

On September 26, Zuhal Demir, the Flemish Minister of Justice and colleague of De Wever, lashed out at Mathias De Clercq, a member of the Flemish liberal party Open VLD. De Clercq had dared to post a photo online of a member of the far-right Vlaams Belang standing next to an N-VA’er, with the comment ‘[f]inally together, finally united.’ In response, she called the mayor of Ghent a ‘rude hatred smurf who got everything handed [to him] on a silver platter’ and a ‘parvenu’ on Twitter.

Last summer, we also experienced a good portion of violent language from politicians who referred to young people involved in a massive brawl on the Belgian coast as ‘lowlifes’ and ‘scum.’ This language that was used solely to refer to the young people who came from Brussels, but not for Dutch youth that had behaved disruptively and attacked policemen some weeks prior.

Some politicians have made coarse language their trademark. But it would be wrong to think that rudeness is a hallmark of a particular political ideology and that other political identities are innocent. Language is also manipulative, a strategy, and the shift in standards is not only about language. Marc van Oostendorp, Professor of Dutch and Academic Communication at Radboud University in Nijmegen, asserts it can be seen in all aspects of life:

Some politicians have made coarse language their trademark

‘The time that there was only one broadcaster and you would comb your hair and straighten your tie before you would go on air is over. That means of intercourse was also present in various aspects of life. I am a professor and I don’t speak like how professors used to speak. Manners have become more and more informal. That is what sociologists call the informalization of society,’ the linguist states.

Leave out or cut out

There is more. According to experts, the shift in political discourse came after the entry of radio and television into parliament, and has continued after the commercialization of the media landscape and creation of social media. But coarse language used by politicians in and of itself is not new at all; it was only used much less in public before.

‘A well-known example are the Nixon Tapes,’ says Van Oostendorp, referring to the recordings made in the White House in the early 1970s. ‘In the end, they caused [Nixon’s] downfall. When these recording were made public, the coarse language of the president, and in particular his racist language towards black citizens, also came to light.’

According to Marlou Schrover, Professor of Economic and Social History at Leiden University, crude language was introduced into parliament by the communist and fascist parties in the 1930s. However, the crude language that was used was simply edited out when debates were recorded.

For politicians, the question is no longer ‘how do I impress with what I say?’ but rather ‘how do I stand out?’

A turnaround in the use of language doesn’t happen overnight. Even after the arrival of radio and television in parliament, there was a period in which there was a clear division between what was broadcasted on television and radio and what was said when the camera or microphone was turned off. Marc Van Oostendorp explains that, ‘[i]f a politician would be verbally out of line, the reporter would intervene and omit a word or passage or cut it out.’

Van Oostendorp further elaborates that ‘the dividing lines that used to be drawn are not easy to maintain anymore. That’s because of social media, but at some point, also because of the entry of commercial radio and television.’

In Belgium, more specifically in Flanders, the shift in language use began in the 1990s, as a part of the evolution towards more populism in politics. Ico Maly, a lecturer in New Media and Politics at Tilburg University, states ‘[i]n that period there was, on the one hand, the commercialization of the media landscape, and, on the other hand, the emergence of new political actors who began to present themselves as the voice of the people.’

Maly calls this evolution the ‘formatting’ of political discourse: everything that is said must fit into a predetermined format. ‘A politician should not be strong in giving speeches in parliament, but should master other genres: the hard interview or the talk show. He or she has to be outgoing and produce one-liners. He or she also has to master the social media logic.’

Politicians must therefore talk more and more like ordinary people and must supposedly ‘name things.’ In the case of right-wing parties, Ico Maly argues that this went hand in hand with isolating certain groups of society and saying very crude things about them. ‘Filip De Winter of Vlaams Belang has built his political career on this,’ Maly points out.

When asked whether this linguistic coarsening is mainly associated with right-wing parties? Maly answers that ‘[i]t’s two-fold . . .The content of discourse is usually different on different sides of the political spectrum, but there are also similarities.’

He cites a few examples from past and present, and talked about two social-democratic foremen in Flanders: ‘Louis Tobback, for example, spoke in the nineties about the refugees who “sit like seagulls at landfills.” And nowadays, you have the language of someone like Conner Rousseau, the sp.a chairman. He speaks as a young adult of 22 years old, who is completely apolitical. All his communication is built on that.’ 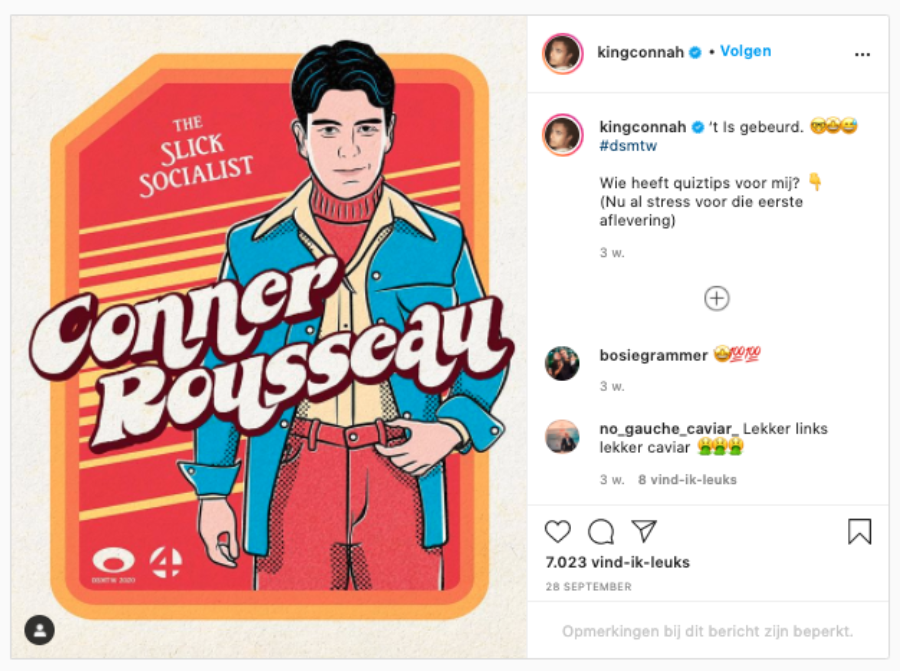 While politicians in the 1960s and 1970s tried to impress with the content of their speeches and by coming across eloquently, politicians now want to leave other impressions. ‘Conner Rousseau, for example, wants to come across as cool. This is clear from the white sneakers he was wearing when he visited the king, and from his Instagram account, which is totally meaningless from a political point of view,’ Ico Maly says.

Experts agree that all these things cumulatively do not only recreate politics, but also society as a whole. The interplay between media and language has an effect on how a ‘good politician’ is defined, and also defines how we as humans talk and interact with one another. What’s more, language also has an effect on the relationships between different political identities, and between national and ethnic identities. ‘Language is never free of obligations, never’, emphasizes the New Media and Politics teacher.

The fact that this state of affairs is a source of annoyance and, above all, anxiety for many people, which, can be seen from, for example, the way in which a video by Angela Merkel was received on social media. In the video, the German chancellor warned against coarse language. ‘Language is the forerunner of action. Once language goes the wrong way, acting also goes the wrong way,’ she said. The video went viral.

‘If you label people as “lowlifes”, there is a chance that they will start behaving in the same way.’

‘A return of a bit of formality in our language may be desirable, but I think it is very difficult to say where the dividing line lies. Informal and foul language does not necessarily mean that it has to be rude or unkind’, emphasizes Professor Van Oostendorp. That is precisely why it is so difficult to draw a dividing line between what is acceptable and what is not.

But it is clear to the linguist that words such as ‘lowlifes,’ ‘scum,’ and ‘trash’ cross the line. ‘While statements as “shut up” or “stay home” are randomly directed at all citizens of the country, words such as “scum” and “trash” are directed to certain people, and surely about particular groups of people in society. By repeating those terms often, they will get into your head consciously or unconsciously, which is clearly a factor that can lead to more discrimination,’ he says.

‘The use of extremely negative words has an impact on the way children and young adults look at themselves.’

Baldwin Van Gorp, a lecturer in Communication Management and Journalism and coordinator of the Institute for Media Studies at Leuven University, also points this out. ‘Perhaps the reasoning behind the use of terms such as “scum” and “lowlifes” is that they are exceptions, the few bad apples in the basket, that’s possible. It’s possible that with those words, one wants to target ten or twenty hotheads, and not a whole group. But I don’t know if that’s what is going on inside most people’s heads,’ he says.

‘If you label people as “lowlifes”,’ continues Van Gorp, ‘there is a chance that they will behave in the same way. They will resist, perhaps even act aggressively. And then you respond with, “you see, this is a lowlife.” A kind of self-fulfilling prophecy.’

For Mireille-Tsheusi Robert, chairwoman of Bamko, an association that focuses on interculturalism and racism, this use of language not only affects the targeted group, or the young adults that make amok or engage in criminal behaviour. It also affects all children belonging to the same ethnic group.

‘Problems are exaggerated, and the use of extremely negative words affect the way children and young people look at themselves. Especially because no positive examples are put forward, except in sports or showbiz. Young people morph into the description given to them.’

As a youth worker, Mireille-Tsheusi Robert researched city gangs and identified the various manifestations of racism against black people. She is also one of the authors of Being Imposed Upon, a collection of reflections on being a woman and being black in Belgium.

‘To label people as “lowlifes,” “scum,” and “trash” is to disdain and to dehumanize them. That is extremely dangerous. And when public figures use these terms, they dehumanize not only those guilty of violence, but all people that are similar to them.’

This article previously appeared in MO* Magazine and on mo.be.