The European Elections in the Low Countries: Mini-Europe

The European elections in the Low Countries did not provide clear-cut results. The voters were dispersed across multiple different parties, from the Extreme Left to the Extreme Right. The loss of the Christian Democrats and the gains of the Greens were visible in both Belgium and the Netherlands, and in addition to that there were special differences that were accentuated between constituencies. Without doubt the political landscape is fragmented. In short, Belgium and the Netherlands together form "mini-Europe".

The new European Parliament does not differ that much from the previous one. There is more fragmentation, though. The traditional groups, that are the center-right European People's Party and the social democrats, are deteriorating and they can no longer form a majority by banding together. However, they continue to be the largest, and it remains difficult to approve anything in Parliament without the involvement of both these parties. The Liberals are making gains and are now clearly the third group, mainly thanks to Emmanuel Macron's movement. The Greens/European Free Alliance is also doing well, but they remain below 10% of the seats.

The Belgian leading candidates for the European elections

Conservatives and Reformists, the group built around British Conservatives, are losing share, and it is very unclear what happens to them when the British leave the European Union. Radical-right nationalists make some gains, but do not end up in a position where they influence policy. In the past, they did not even try to do so and they also didn’t participate in building legislation. The group to which Nigel Farage’s hard Brexiteers also belong to remains - at least for the time being - in place. 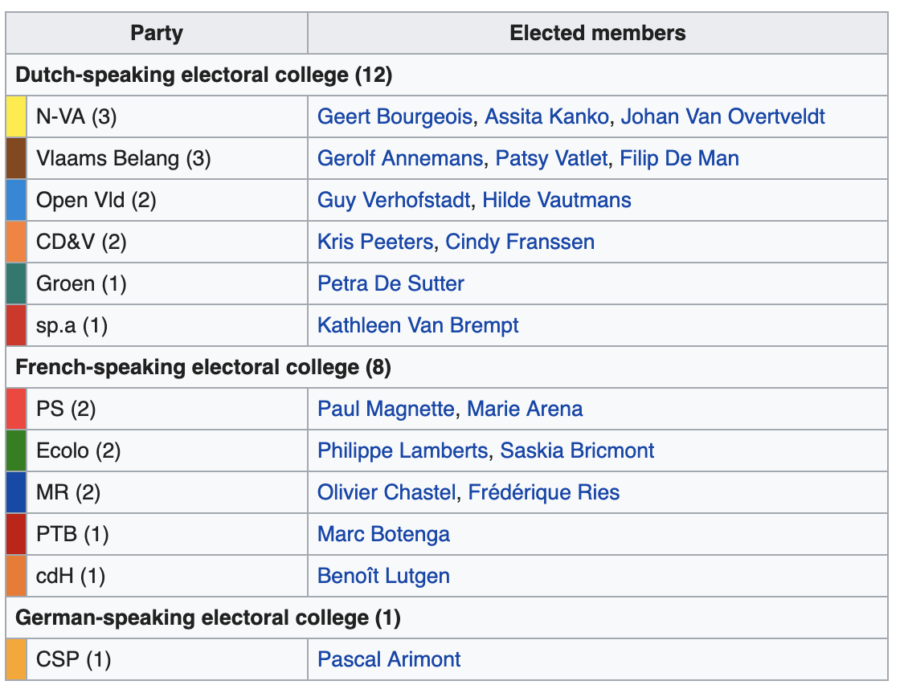 Finally, there is the extreme left, whose situation deteriorates slightly, but they’re not completely wiped out. The conclusion of the ballot is that the European Parliament is a little more divided, and therefore perhaps a little more representative. The large groups that traditionally call the shots are closely being followed by a motley collection of other political movements, but none of them are dominant. Therefore, the parliament as a whole is not suffering a jolt to the left or the right.

This doesn’t mean that there are no major differences between the Member States. Italians did solidly vote right, Germans voted remarkably green, and in Spain and Portugal, the Social Democrats did extremely well.

Similarities, but also many differences

If we take a closer look at Belgium and the Netherlands, we notice some differences. In the Low Countries there is no uniform vote. This is immediately apparent when we look at the most striking trends: in the Netherlands, the social democrats do very well, while in Flanders, the gains of the extreme right are very pronounced; in Wallonia, the green Ecolo came forth as the winning party. In this way, Belgium and the Netherlands together reflect many trends at the same time. The elected representatives from the Low Countries come from almost all political groups. 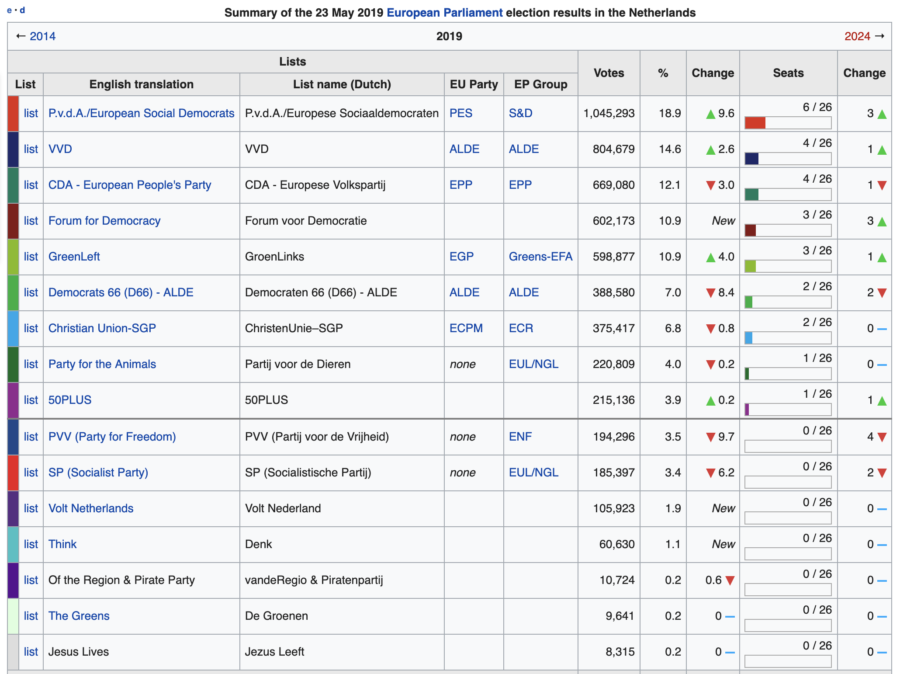 In particular, the Liberal Party is supported by many Belgians and Dutch people. For a period of time, both countries have been governed by a liberal prime minister, Charles Michel and Mark Rutte, respectively. In Belgium, the French-speaking and Dutch-speaking liberals are losing some ground, but they are not being washed away. In the Netherlands, Prime Minister Rutte’s party is making electoral gains.

There are a few similarities between Belgium and the Netherlands: in line with the European trend, Christian Democrats are losing their influence. However, the defeat is not spectacular; together they are losing only one (Dutch) seat. The Green Party is making progress in every constituency and gains an additional seat in both the Netherlands and Wallonia. 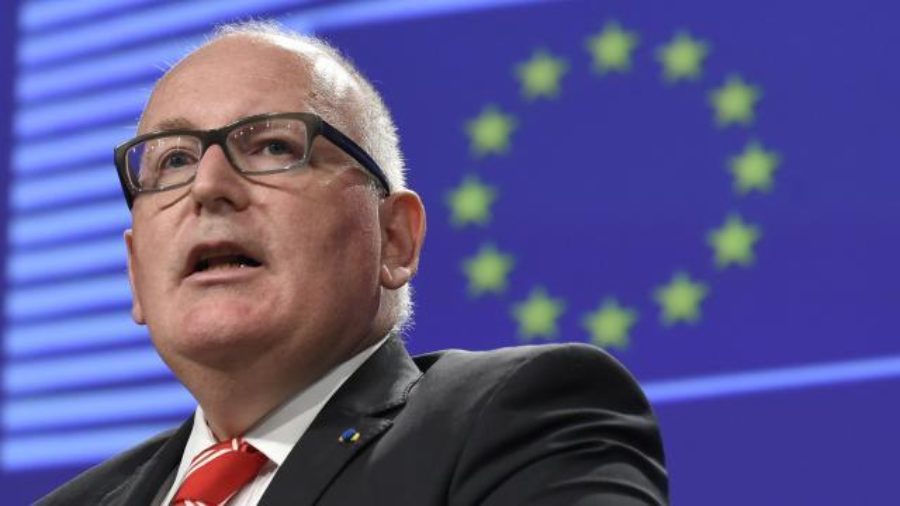 The Dutch Labor Party of Frans Timmermans, the center-left candidate for European Commission president, is the unexpected winner of the European elections in the Netherlands

However, there are differences as well. For the Social Democrats, we see the same thing as for the Liberals, but even more pronounced. In Belgium, they are slightly worse off (one seat less in Wallonia), while in the Netherlands – contrary to the European trend – they are taking a big leap forward and double their seats, from three to six. The fact that figurehead Frans Timmermans is one of the candidates for the presidency of the European Commission, may have played a role in the enthusiasm of the voters.

In Flanders far-right gained three seats in the European Parliament

On the extreme right, we see a more remarkable pattern. In Wallonia, this tendency is negligible, but in Flanders, it has made considerable gains. Vlaams Belang (Flemish Interest) has three seats now, whereas in the previous legislature they only had one seat. In the Netherlands, we see something odd: the PVV led by Geert Wilders, who was a member of the right-wing extremist group in the Parliament, to which Vlaams Belang also belongs, disappears from the European Parliament.

Are you enjoying our articles? Do you want to continue reading these in-depth stories in the future? Maybe you should consider supporting us.

I want to support the low countries

On the other hand, Thierry Baudet’s Forum for Democracy scores more than 10 % out of nowhere, and sends three representatives to Europe. Baudet’s European program bears a great deal of resemblance to that of Wilder’s, but it seems that Forum will not be joining the right-wing extremist group, but the more moderate Conservative group. As has been said, it is uncertain what will happen to this group after Brexit. So possibly, Forum for Democracy will soon have to look for a new political group after all. In the Conservative Group, Forum finds the largest Flemish party, the Flemish-nationalist N-VA, which had to give up one seat, but did get support from the majority of voters in Flanders.