Arno Boey: I Sweat in Ultramarine

At the request of the Flemish-Dutch House deBuren eighteen young Flemish and Dutch authors each brought a painting from the Rijksmuseum back to life. They wrote a new text about an old work from the Gallery of Honour, based on one key question: what do you see when you look at these paintings through gender glasses? Arno Boey gives a voice to the painting The Milkmaid by Johannes Vermeer. 'The milk is sour, my gaze intense and I’m sweating.'

Arno Boey (b. 1996) occupies a space between movement and prose, between Brussels and Antwerp, between breaststroke and front crawl. He speaks French with his father, Dutch with his mother. Once upon a time, he dreamt of a magazine full of young writers, poets and illustrators, and now his bookshelf boasts five issues of ZINK, neatly arranged by colour. 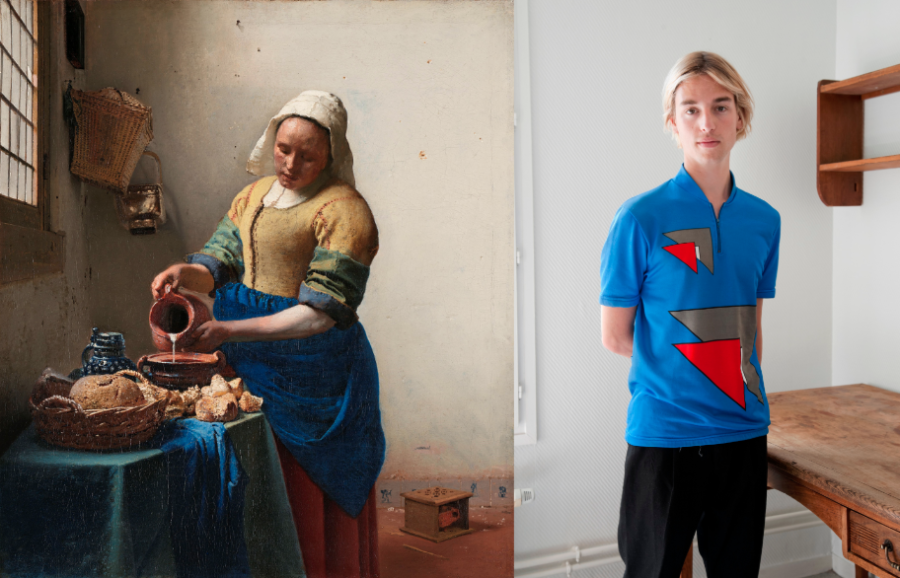 I Sweat in Ultramarine

I hear you tell stories. You point to me, refer to me. You’re the guide. You say: ‘linen cap’, ‘stale bread’ and ‘foot warmer’, ‘Delftware’ and ‘butter dish’. You say that I may be Vermeer’s maid, that my husband is away travelling, that I’m waiting for him. Apparently, my name is Tanneke. You give me multiple names. I’m often translated, and known as La Lechera, La Lattaia, Dienstmagd mit Milchkrug. Melkmeisje, Milkmaid.

I see the visitors listening to your stories. Yesterday, one of them was really looking at me. You were in a hurry, moving on to the next canvas with your group, and did notice her lingering. It was a girl, roughly my age. She muttered a prayer. I recognised it. I did my best not to blush. She did redden, covering her cheeks with her hands as if she was cradling a wounded animal.

This morning you appeared before me with new visitors. As I kept my eyes fixed on the milk, you told your group: She’s the radiant centre of this still life. That’s sweet. Again, I almost blushed.

A little later you said: She symbolises the home front, she’s a beacon of trust.

The first time I heard that I was shocked. Until Vermeer chose to paint me, I was alone in this kitchen. My calloused fingers smelled of buttermilk. I had no children. There had been talk of a betrothed once, but he left. Thereafter I was shunned and hidden away in small rooms. Every now and then the door would open and I would submit to the gaze of tired eyes, to being roughly pinched in the bottom.

It was only after the paint had dried that I became something. A symbol, as you say. Apparently, I project values as a canvas. My linen cap is associated with purity and my hips are swaddled in generosity. My cheeks glow with piety and underneath my skirts I exude innocence.

Look, it’s October and chilly in this room and all is quiet around me and yet I’m sweating. I’ve rolled up my sleeves and hitched up my apron and yet I’m still sweating.

Stand before me again and tell them things they don’t know yet.