Nationalmuseum has acquired two important oil paintings by Frans Francken the Younger and Daniel Seghers, both influential artists in seventeenth-century Antwerp, the Golden Age of Flemish art. Before now the Nationalmuseum did not own any painting by Francken of this significance. And by acquiring Seghers’ large-format painting on copper, the museum is now better able to reflect the earliest period of art collecting in Sweden.

Carina Fryklund, curator old master drawings and paintings, said 'We are very pleased, indeed, with these two acquisitions, which complement the museum’s holdings of European Baroque art in a most satisfactory manner. Francken’s painting is a cabinet painting of unusually large size. It is a fine example of Flemish cabinet painting as a genre, which will eventually find its place in the chronological and thematic presentations of the museum’s collections. In addition to its exceptional quality as a work of art, Seghers’ painting may also yield valuable information on the techniques of oil painting on copper, as well as the early history of collecting in Sweden.'

Frans Francken’s Wedding at Cana (ca. 1618/20), depicts the story from the Gospels of St. John about the miracle that occurred at the wedding in Cana, a popular motif in the Francken studio.The painting’s rich detail, and the figures dressed in colourful “oriental” garb, are typical of Flemish cabinet painting. The painting comes from the collections of The State Hermitage Museum in St Petersburg, parts of which were deaccessioned by the Soviet authorities in the late 1920s. It was subsequently acquired by Swedish ambassador Vilhelm Assarsson (1889-1994). Through his bequest the painting then became part of the art collection owned by the Swedish Academy, from whence it was sold to the Nationalmuseum. 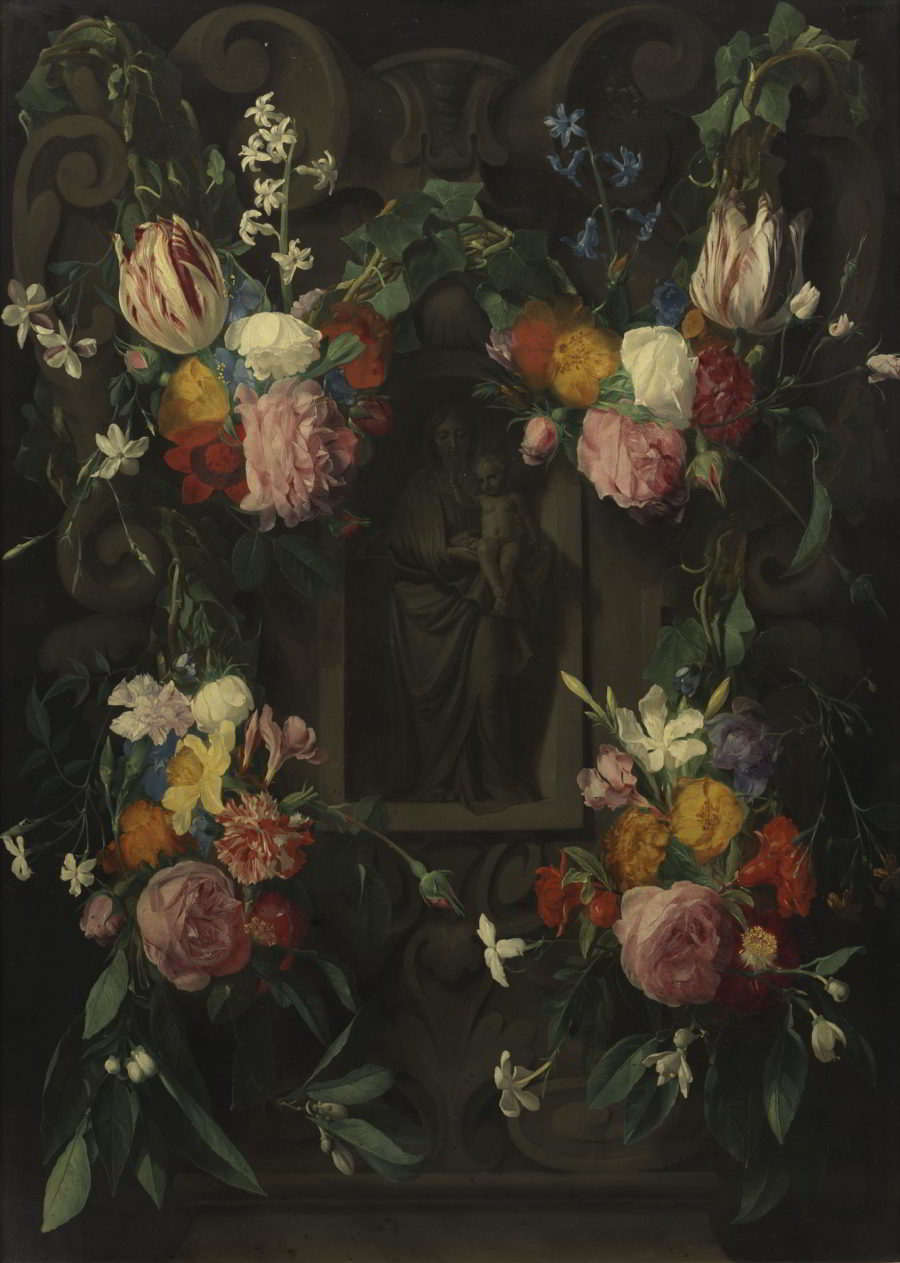 Seghers’ Flower Garland with the Virgin and Child (ca. 1645-50) was painted on an unusually large-format copper plate. The central image of the Virgin was probably executed by Erasmus II Quellinus (1607-1678), one of the artists with whom Seghers collaborated over the years. Together they produced around 29 compositions comparable to the present example, one of which bears the signatures of both artists. A majority of these works were not intended for sale but were instead used by the Jesuit Order as diplomatic gifts to European rulers and other prominent persons. The painting belonged to the well-known art collection at Österbybruk in Uppland, and thus has an early Swedish provenance. There, it was one of the most highly valued paintings in the art collection of Henrik Wilhelm Peill (1730-1797) and his spouse Anna Johanna Grill (1745-1801).

The National Gallery of Art in Washington has recently acquired its first work by one of the great still-life painters of the Dutch Golden Age, Jan van de Velde III (1620–1662), who specialized in intimate compositions of everyday objects. Signed “Jan van de.Velde. fecit” on the table and dated 1650 on the belly of the jug, Still Life with Stoneware Jug and Pipe is the Gallery’s first tabakje (tobacco still life)—a popular motif in the seventeenth century, when tobacco was introduced in the Dutch Republic and imported from abroad. Acquired through the generous support of The Lee and Juliet Folger Fund, the painting complements works by other Haarlem artists in the Gallery’s collection who inspired Van de Velde, including Pieter Claesz, Willem Claesz Heda, and Gerret Willemsz Heda. 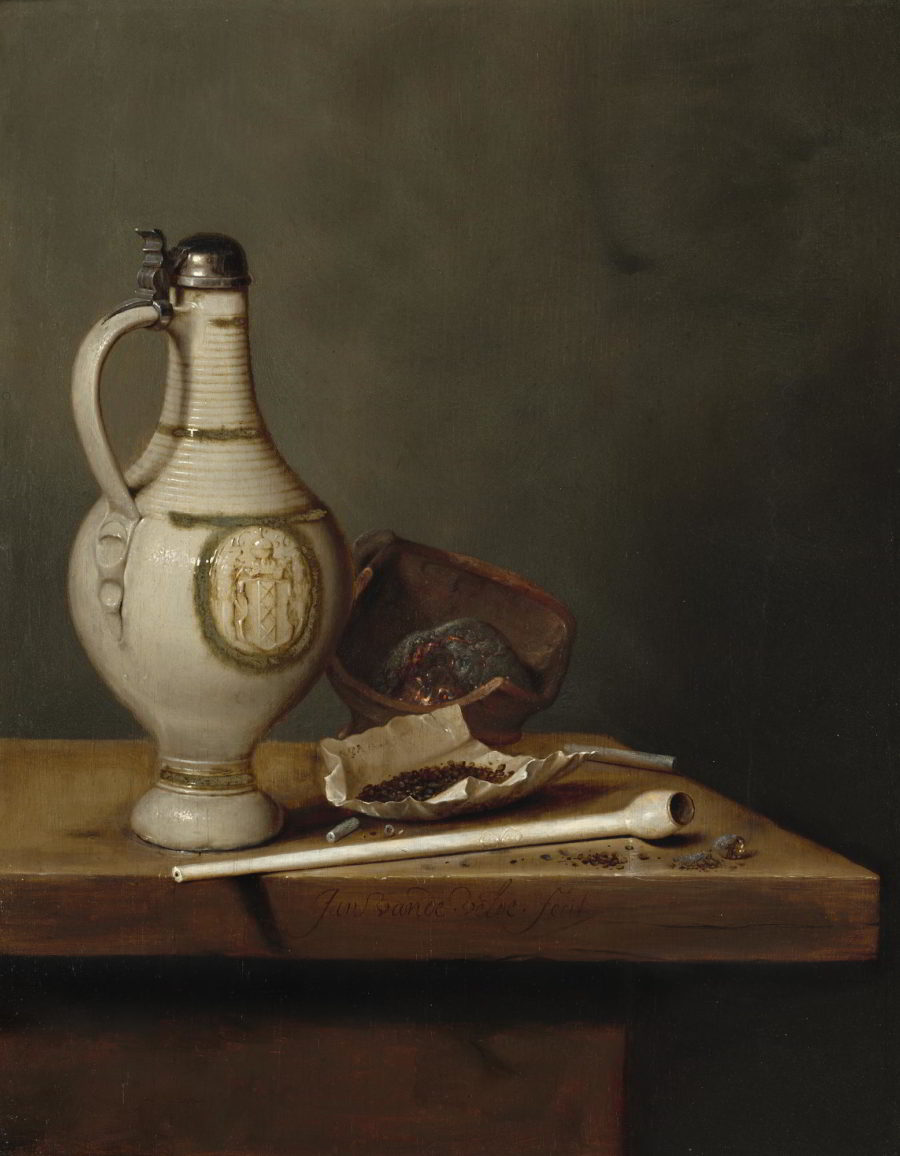 Born in Haarlem, Van de Velde was the grandson of the master calligrapher Jan van de Velde the Elder, grandnephew of the famous landscape and merry company painter Esaias van de Velde, and son of Jan van de Velde the Younger, who was well known for his picturesque etchings of Haarlem and its surrounding environment. It is possible Van de Velde studied with his father, although nothing is definitively known about his training.

A masterpiece in gray and earth tones, Still Life with Stoneware Jug and Pipe is an exquisite example of the approximately 40 paintings Van de Velde executed during his short career. A stoneware wine jug emblazoned with the crest of Amsterdam is surrounded by a long clay Gouda pipe, a paper wrapper filled with tobacco, and an earthenware brazier whose broken sides reveal embers of glowing peat within. Van de Velde imbued these simple objects with a compelling presence by arranging them in a solid, pyramidal form; placing the viewer at a close and relatively low vantage point; and silhouetting their shapes against a subtly gradated background. From the discarded embers of the pipe, a delicate wisp of smoke trails upward, enlivening the image with a sense of movement that underscores the tranquility of this majestic small-scale work.

Due to extensive research, the three museums were able to reconstruct the provenance of five paintings, three color-prints and a wood panel with ivory reliefs, the context of the confiscation and their whereabouts after 1945. They also found the heirs in London, Zimbabwe and Tel Aviv. 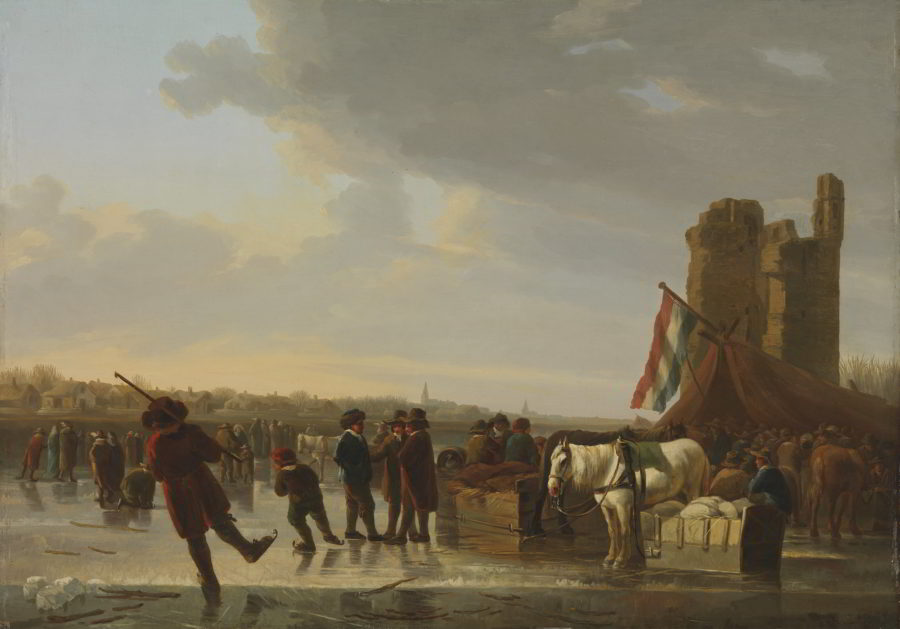 Among the returned artworks are a Portrait of a Young Man with a Lemon (1660) by the monogrammist B.v.H. (probably Bartholomeus van der Helst) and a late eighteenth-century copy after Albert Cuyp.

In November 1938, Julius and Semaya Franziska Davidsohn were the victims of one of the biggest Nazi art thefts of the Gestapo due to their Jewish ancestry. The looted works of art came to the so-called Central Collecting Point, located at the Königsplatz in Munich, and found their way into the possession of the three museums via the Treuhandverwaltung von Kulturgut (Trusteeship for the Administration of Cultural Assets) in Munich in 1955.

Prof. Dr. Bernhard Maaz, representing the three museums, said: 'The provenance research team of the Bavarian State Painting Collections, which has been substantially increased over the last years, also provides other museums with its knowledge. An example is this restitution procedure. I am pleased that we could complete this long and difficult research project and that we could return all the objects affected. The research findings also show that the research tools and methods of this discipline are really mature now.' 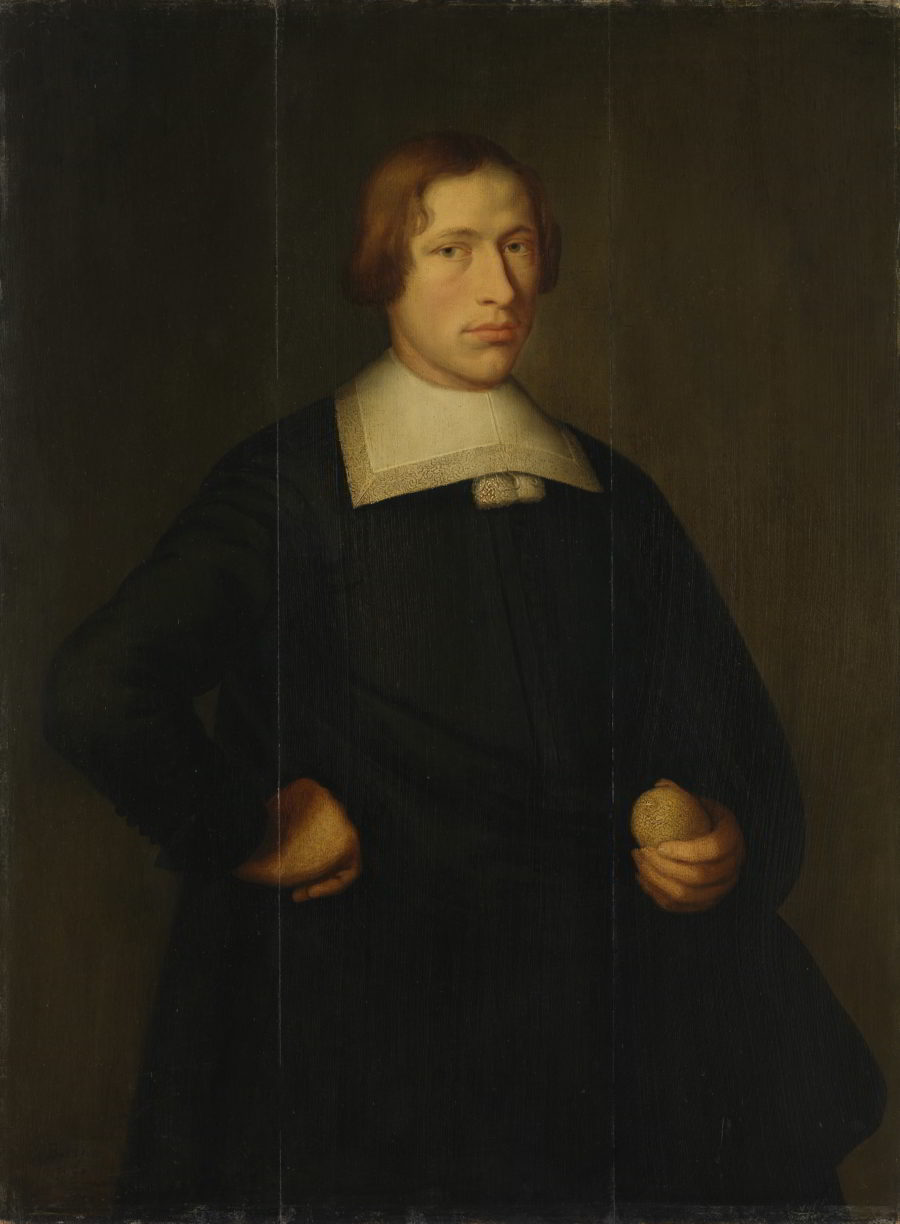 The Princeton University Art Museum announces the acquisition of one of Rembrandt’s most iconic prints: the evocative and technically complex etching by Dutch Landscape with Three Trees (1643).

The composition combines three large trees at center right with flat expanses of tilled fields, populated by windmills, cattle and herdsmen and canopied by dramatic clouds and driving rain. The sweeping landscape depicted is generally considered to be a distillation of specific sites in the countryside around Amsterdam, which Rembrandt explored during walking expeditions. Additional human motifs – including (on the far right) a seated artist sketching and a horse-drawn wagon full of people; a fisherman and his female companion in the left foreground; and two lovers, barely visible in the shadowy bower at right – contribute to the scene’s humanistic appeal. 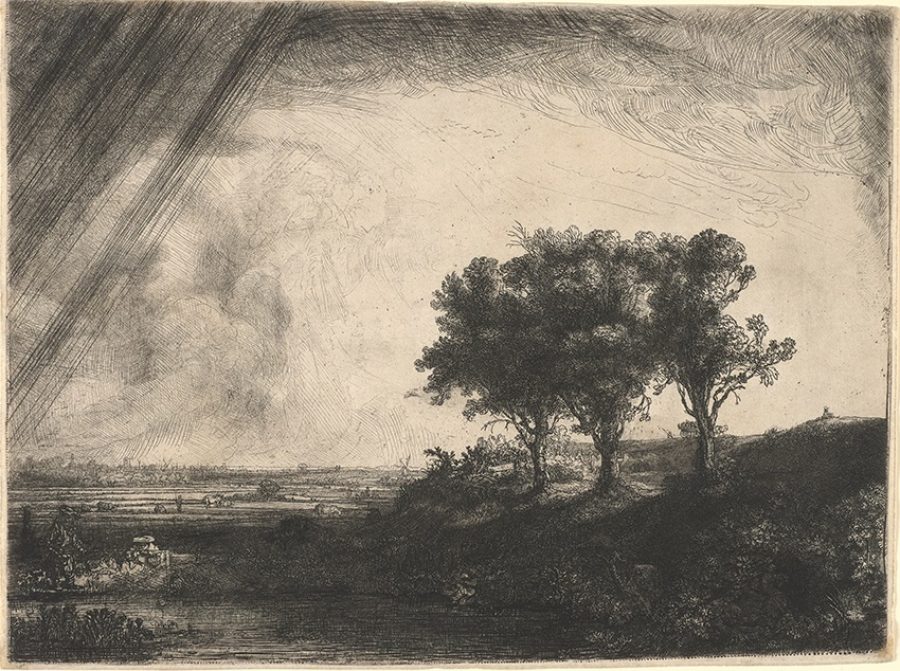