‘Normal’ Does Not Exist at the Haarlem Museum of the Mind

The psychiatry museum in Haarlem reinvented itself as a Museum of the Mind. Illness and abnormalities are not the starting point, but the conviction that 'normal' does not exist. It earned the institution the 2022 Museum of the Year Award.

Nick Verstand's Resonance Room is a black box, literally and figuratively. When you step into the dark loft and attach a sensor to your ear, a computer converts your breathing into a projected ellipse and synchronized vibrations in the floor. How exactly it works and with what effect is not entirely clear. On most people, the space and hypnotic effect has a particularly Zen effect. But there are also guinea pigs in whom the combination of moving light and vibration evokes feelings of stress and unease. The version of the Resonance Room that is used in youth institutions for aggressive or hyperactive teenagers is therefore a bit toned down. The unadulterated prototype that is in Museum of the Mind allows visitors to look inwards and makes them more aware of an emotional balance that they usually experience as a given. 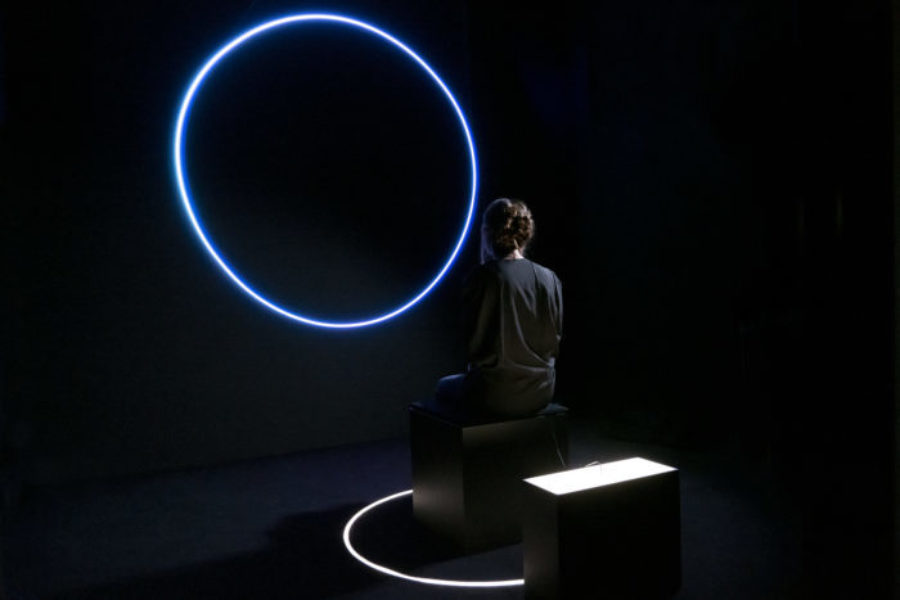 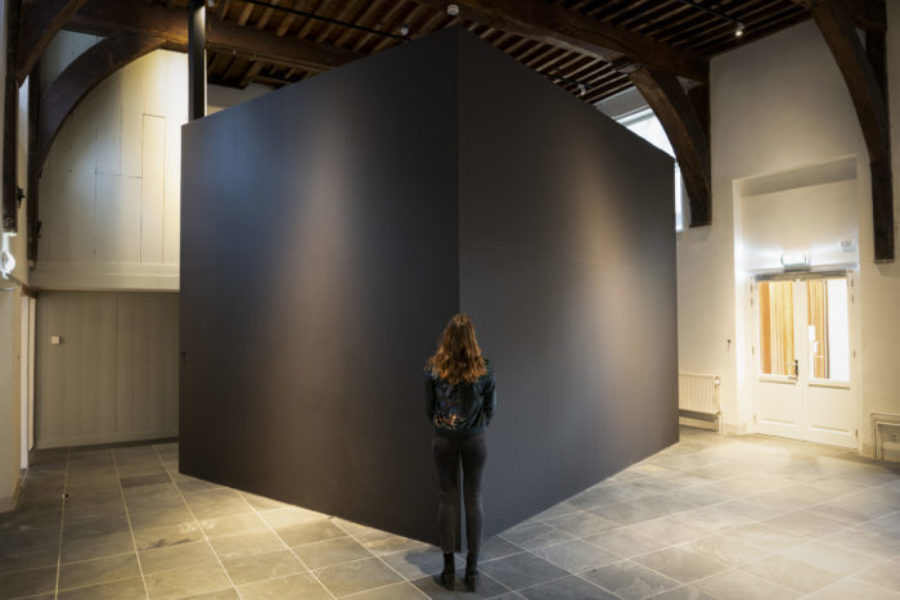 The Resonance Room of Studio Nick Verstand © Museum of the Mind

The work of Verstand, in which art, science, therapy and public interaction flow seamlessly into each other, is typical of the museum in Haarlem, which reopened in November 2020 in a renewed format after a renovation lasting a year and a half. Before that, it was called the National Museum of Psychology, and the renaming to Museum of the Mind is certainly more than just a semantic intervention.

In the old set-up, the visitor walked around with an audio device in the form of a stethoscope. He felt like a researcher or observer, perhaps an attending physician. At least someone who looks at mental illness from the outside, as something that can be interesting, but primarily concerns the other. In Museum of the Mind, that detached focus has been exchanged for identification and empathy. And that fits in a time when burnout is almost as commonplace as the flu, depression is fast becoming the number 1 disease and one in three Dutch people is active as a caregiver. Anyone who still says that he is normal should be checked. Or as director Hans Looijen put it at the reopening in November 2020: 'We have 17 million collection pieces; this museum is about all of us.'

Director Hans Looijen: 'We have 17 million collection pieces; this museum is about all of us.'

This "de-medicalized" approach does not mean that the history of psychiatry is being swept under the carpet here. That is also not possible in a location where history constantly imposes itself. The oldest part of the complex dates from 1320, was located outside the city walls of Haarlem and was initially intended for lepers. The building in which the current museum is housed was converted in 1559 into a shelter for "madmen", people who for various reasons fell outside society and were often regarded as crazy or insane. The quiet patients ended up in the care room, where during the restoration the death-watch beetle was repelled from the wooden beams of the high ceiling. The less manageable cases were locked in one of the fourteen madhouse cells: bare, dark pens with bars in the door and no more than a wooden crib with straw as a comfort.

The museum also has a considerable historical collection that covers more than seven hundred years and a media library with seven hundred and fifty mostly unique titles. In the room where the history of psychiatry is on display, it is striking how young mental health care actually is and how relatively recently physical coercive measures have been replaced by psychotropic drugs. Until the nineteenth century, bloodletting was still considered a panacea, which often caused more damage than it did well. What followed, from hydrotherapy to electroshock, was also not what you would call subtle. 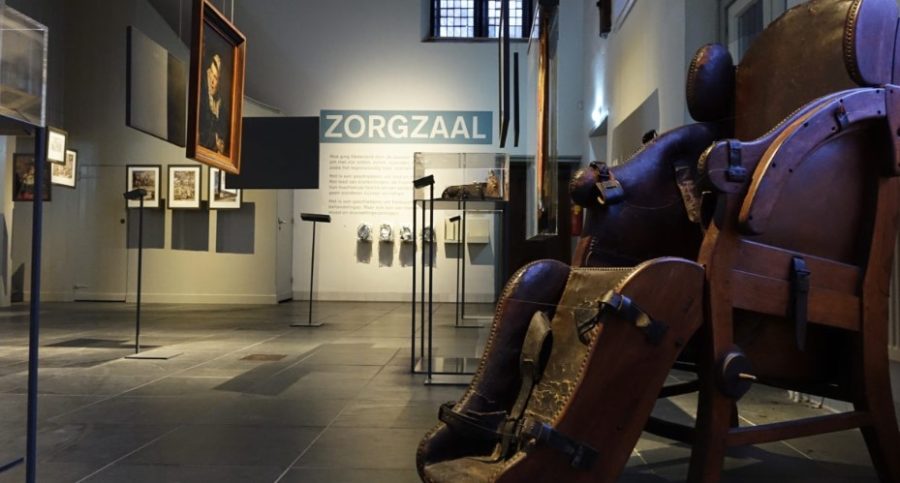 The collection presentation of instruments combined with photographs and drawings resembles what you are presented with in, for example, Museum Grombaard in Amersfoort, although the dioramas there with mannequins such as nurses and bedridden patients look a lot more old-fashioned. The equipment sometimes looks sinister, but the horrific feeling that occasionally creeps into you in the Ghent Museum Dr. Guislain, once the first psychiatric institution in Belgium and nevertheless regarded at the time as very progressive and humanitarian, is absent.

What the museum in Haarlem has in common with its counterpart in Ghent is the major role that art plays. In the Dr. Guislain Museum, this is for outsider art, monomaniacally repeated patterns of autistics or chaotic drawings of schizophrenics leading to horror vacui. Museum of the Mind shows this kind of art to a limited extent, for example, Lionel Plak’s maps of underground railways or the "stigma jacket" of the long-term drug addict Ahmet Turkman. A label on a sticker is attached on the outside with such words as junkie and lazy, but show on the inside, that it is actually more than those stereotypes and prejudices. But most of the considerable collection of outsider art can be seen in the annexe that is part of the Hermitage Museum in Amsterdam. 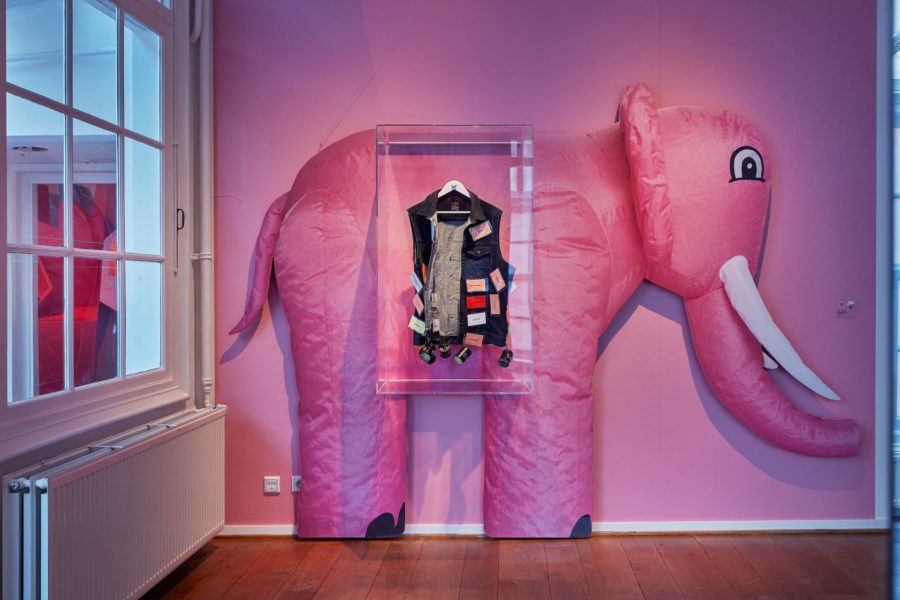 Pink elephant and "stigma jackett", part of Ahmet Türkmen's personal story about shame and self-stigma in the permanent exhibition of Museum of Spirit © Bastiaan van Musscher / Museum of the Mind

The art in Haarlem is outsider art or that which borders on that niche, such as the graphic novel that graphic designer Kees Peerdeman made to express and control his fears. He is in the company of such international greats as Yayoi Kusama, who has been voluntarily staying in an institution for decades, and Tracey Emin, who regularly makes her personal emotions the focus of her art. Particularly impressive is the group of sculptures with which Marc Quinn has expressed his struggle against alcohol addiction. They are lead casts of his own torso, torn and sloppily welded back together. They stand on pedestals in the courtyard near the madhouse cells, the place where Quinn might have ended up in earlier centuries. 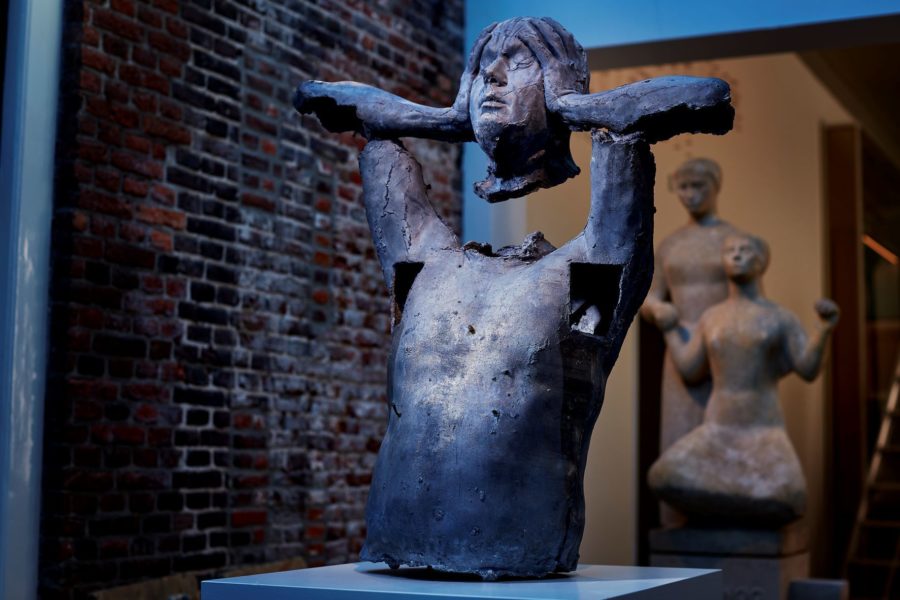 Emotional Detox by Marc Quinn, a sculpture expressing his struggle against alcohol addiction © Bastiaan van Musscher / Museum of the Mind

The awarding of the 2022 Museum of the Year Award to Museum van de Geest is not only due to the blending of old and new, art and cultural history. The architectural facelift by bureau Verlaan & Bouwstra has undoubtedly also contributed to this. The renovators glued the loose parts of the complex together as it were, with a glass lock that functions as an inviting entrance and leads to a courtyard. Visitors are guided through a logical route along the wards, separation cells, but also the management residence area, linen room, and kitchen.

In the rooms, there are colourful showcases and pedestals that look like abstracted human figures. It is as if Kossmanndejong, award-winning exhibition designers, has scattered an enlarged box of building blocks throughout the building. It works like visual shock therapy, preventing you from sinking into an attitude of historicizing aloofness. For the same reason, text panels have been scarcely used, which often make visitors read more than look. Those who want to know more can go to the audio tour, which no longer looks like a stethoscope, but does contain a total of nine hours of background information.

By any means necessary, Museum of the Mind obliterates the hard line between what used to be considered normal and crazy

By any means necessary, Museum of the Mind obliterates the hard line between what used to be considered normal and crazy. In a way, it follows the ideology of anti-psychiatry of the 1970s, which saw mental health care as an integral part of today's high-speed society and believed that patients should not live separately but rather amid society. However, the museum does not advocate a different system – after all, anti-psychiatry led to the breakdown of care and the current reception crisis of confused people who ended up on the street. Museum of the Mind prefers to massage the visitor towards a different consciousness. It is similar to the Dutch art manifestation Niet Normaal held in Amsterdam, which already in 2010 questioned normativity in appearance and behaviour, long before the concept of diversity came into fashion.

Fortunately, Museum of the Mind stays well away from the hackneyed vocabulary of lip service but focuses on recognition and involvement. It dares to take on an active formative role, but also asks something of the visitor. At the end of the tour, people are requested to sign the universal declaration of the open mind. That too is also quite topical in an era when people form opinions with increasing ferocity, rigidly displaying an us-versus-them-mentality and excluding dissenters out of hand from dialogue and declaring them crazy. 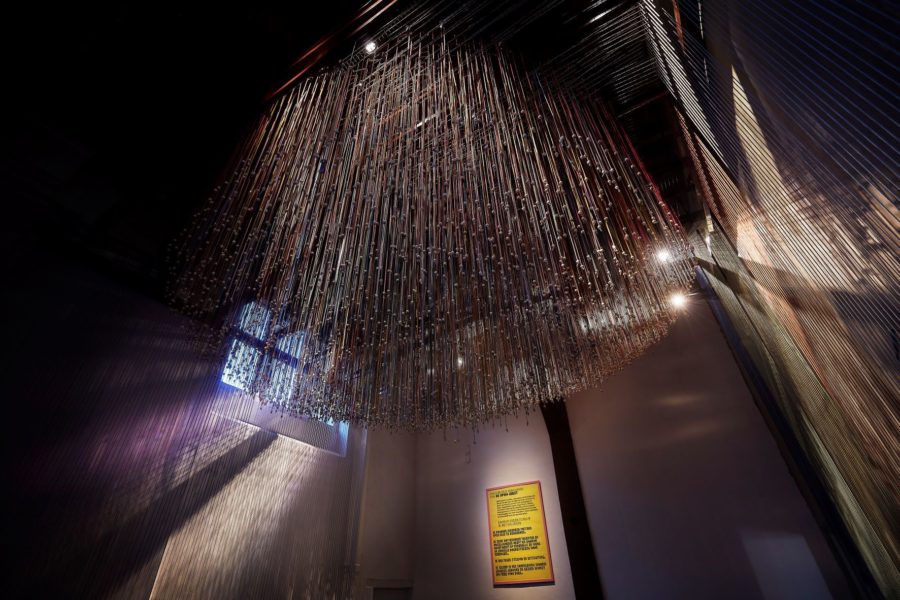 Learn How the Netherlands Stays Dry at the Afsluitdijk Wadden Center