Given their geographical proximity, it is unsurprising that in the last thousand years there has been much migration from the Low Countries to the British Isles. In the twelfth and thirteenth centuries, there were reports of people of Flemish heritage in Scotland, the north of England and Wales. It is said that they were known for their hard work and for being good tradesmen which allowed them to contribute to the local economy. Furthermore, they were typically invited by the kings of England or Scotland to inhabit certain areas, and so owed their loyalty to the monarch rather than local people. This, as you can imagine, meant that they were not always welcome settlers. In this article I focus on the Flemish who populated South-West Wales from the twelfth century onwards.

The first question we must ask is how they got there. One suggestion is that they moved to Britain in about 1100 in order to escape large-scale flooding in Flanders. However, one historian rejects this claim as there was simply no such flooding of Flanders at this time. Another possibility is that overpopulation was a driving force for the exodus. This may well have played a role, but a more likely explanation is that these were the descendants of Flemish troops who had fought alongside the Norman troops of William the Conqueror in his successful invasion of England in 1066. Initially they, and one assumes their families, were moved to northern England in order to help control an area of the country that had strongly opposed William’s invasion. However, by the early twelfth century, perhaps driven by fears that they were ‘going native’, the Flemish were moved again, this time to the far south-west of Wales. 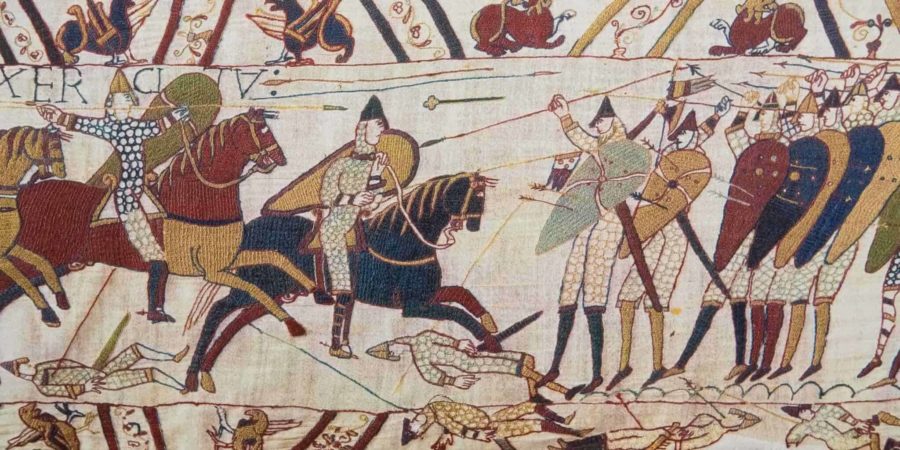 Companions of William the Conqueror fighting at Hastings, as depicted in the Bayeux Tapestry 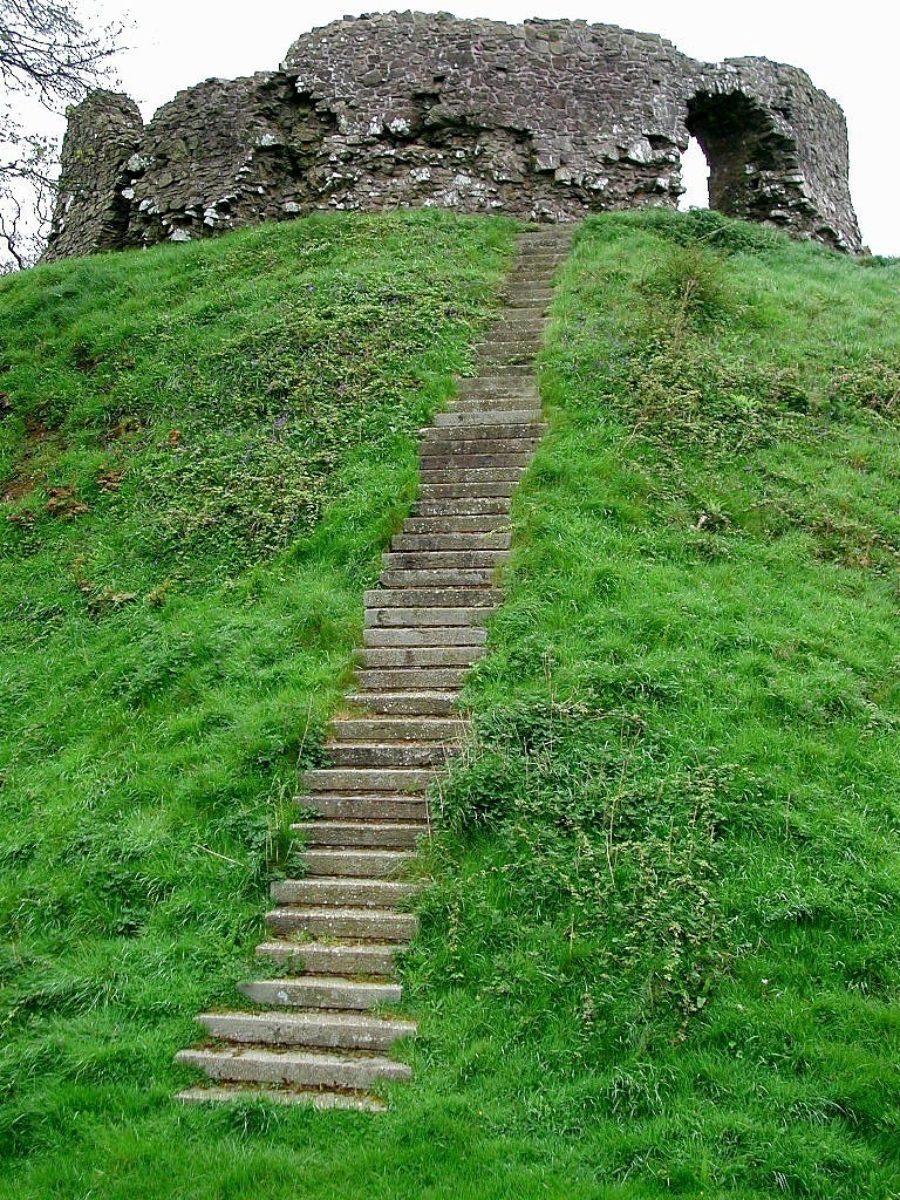 The ruins of Wiston Castle

One of their leaders seems to have been a certain Wizo, who is referred to as Wizo Flandrensis or Wizo the Fleming, princeps or chief of the Flemings in official documents. He was granted land in Pembrokeshire in South-West Wales by the Anglo-Norman king, Henry I, who had wrested control of the land from its previous owner, Arnulf de Montgomery, who had been in revolt against Henry. Wizo built a castle on the land and a settlement grew up around it, which was named Wiston - Wizo’s town - the castle taking the name Wiston Castle (Castel Gwis in Welsh). Furthermore, he gave land to the Flemings who had accompanied him to South-West Wales. As a token of his gratitude for this grant of land, Wizo gave a donation of a church to monks in the English city of Worcester. Wizo died sometime before 1130 and was succeeded by his son Walter fitzWizo. ‘Fitz’ is a Norman-French word from the Latin ‘filius’ meaning ‘son of’ and suggests a close association between the Normans and Flemings.

Gerard of Wales reported that the Flemish were brave, robust and prepared to work hard

Responses to the Flemish settlers in this alien land were mixed. Clearly, many Welsh resented their presence, in particular as they had been in some sense ‘planted’ in Pembrokeshire by the Norman invaders. There were several battles between the Welsh and the Flemish in the course of the twelfth and early thirteenth centuries, and finally, in 1220 Wiston Castle was captured and destroyed by a Welsh leader called Llywelyn. However, not all Welsh were hostile to the Flemish. In a journey through Wales in about 1190 Gerard of Wales reported that the Flemish were brave, robust and prepared to work hard. Furthermore, they kept sheep and were highly-skilled in turning the wool into cloth. It also appears that there were significant numbers of Flemish in Pembrokeshire, not just those around Wizo’s settlement but enough, for example, to fight the Welsh over the important town of St. David’s.

In 1169 there are reports of Flemish moving to Ireland, pointing to the spread of people of Low Countries heritage across the British Isles in the medieval period. As for those who remained in West Wales, it is likely that over time they shifted towards English, so much so that this part of Pembrokeshire became known as ‘Little England beyond Wales’. But the question arises as to whether they continued to use Flemish and if so for how long.

In 1216, 150 years after the Norman Conquest, Gerald of Wales reports that a knight called Ernaldus Rheting spoke to a relative of his in ‘Flemish’. Two reports suggest that Flemish may still have been spoken in Pembrokeshire as late as the sixteenth century. In one report, the English historian William Camden observes that some people in the area spoke ‘something like English’, which is suggestive of Flemish. On its own this report would be insufficient evidence, but we have a second report from the artist and poet, Lucas d’Heere, originally from Ghent, who lived in Britain for several years. He wrote a history and description of the British Isles in Dutch which included a reference to the Flemish in West Wales. He follows the account of the Welsh author, Humphrey Lhuyd: Haer gheslachte tot noch aen de sprake…is ghelyc Humphrij Lhuijd seyt (‘their descendants still speak the language…as Humphrey Lhuyd says’), and continues by indicating that he had actually spoken Flemish with them: …ende ick hebbe ooc med eenighe ghesproken die noch goed vlaemsch spraken tzelfde aen haer ouders ende als van vader tot kinde gheleert hebbende (‘and I also spoke with some people who still spoke good Flemish, having learned it from their parents from father to son (lit. child)’). Whether d’Heere actually did so cannot be independently verified but taking into account Camden’s report, the possibility is certainly there.

So, what traces, if any, remain today of Wizo and his fellow Flemish settlers in West Wales? Some scholars have suggested that there are Flemish loanwords in the Pembrokeshire dialect, but such claims need to be treated very cautiously. More promising is the influence of the Flemish on local place names. The ruins of Wiston Castle still stand next to the village of Wiston. The village of Lammaston may take its name from the Flemish Lambert and Rickeston from Ricard. Indeed more than twenty villages may take their names from the Flemish settlers. Finally older maps of the Preselli Mountains refer to the Flemish Way, although this name may have fallen out of use.

Nevertheless, there is sufficient evidence to conclude that there were Flemish immigrants in West Wales who maintained their Flemish identity for several hundred years, so much so that the area is sometimes referred to nowadays as Klein Vlaanderen (‘Little Flanders’) beyond Wales. While they were not entirely welcome by local people, their hard work and skills as tradesmen were clearly recognized and this adds another chapter to the story of migration from the Low Countries to other parts of the world.