'De onvolmaakten' by Ewoud Kieft: A Perfect World Is Not Ideal Either

Even the perfect world of the future, where no meat is eaten and you can be taught by a virtual Einstein and Nietzsche, is not to everyone’s taste. Ewoud Kieft offers a lot of food for thought in his debut novel De onvolmaakten (The Imperfect Ones).

Might literary science fiction still become a genre in Flanders and the Netherlands? After an earlier review in this column of the debut Concept M by Aafke Romeijn, we plunge once again into the future. In his fiction debut De onvolmaakten (The Imperfect Ones), historian Ewoud Kieft, known as a columnist and writer of non-fiction, sketches a world in which a kind of “benevolent dictatorship” emerged following the 2035 crisis that brought the world to the edge of the abyss.

The leaders of that new world learned their lesson from the lifestyle that caused the old world to teeter so precariously. Meat, cheese, alcohol, and other drugs are no longer consumed, livestock farming and fossil fuels are prohibited, people live in self-sustaining cooperative groups. Anything that could potentially destroy the planet is banned, except of course humans, who are living longer than ever, thanks to an alternative lifestyle. Now and then, a blind eye is turned. There are illegal marketplaces for those who cannot keep up, people for whom the transition went just that bit too fast, those who, whether consciously or not, missed the period of Implementation.

Technology of course plays an important role in this new world. Using earplugs and lenses you can escape into the Yitu, an advanced games console, which blurs the boundary between real and virtual life. The Yitu is also a learning environment, where you can take classes with Einstein and Nietzsche and other bright minds from the past in an Etonian context. Study and recreation thus become indistinguishable. Through the same lenses and earplugs, some also connect with Gena, an intelligent algorithm that serves as a permanent personal life coach. Gena whispers words of encouragement, reminds you of appointments, provides good counsel, which can be of help especially for vulnerable people with a predisposition to depression. But Gena sometimes even suggests possible love matches. Because in the future people still crave real, physical contact, Yitu dates alone are not always satisfying enough.

We learn about all of this through the story of Cas, a thirty-something who was left to his own devices from an early age (read: the Yitu and especially Gena). Gena has been his companion since early adolescence, has followed and helped shape his entire upbringing. Gena reports on their connection at a meeting with officials to assess Cas’s life up to that point, and to evaluate Gena’s guidance and its impact.

That meeting is a wonderful narrative invention. A central thread in the book, it allows Kieft to philosophize freely about the good and evil sides of the benevolent dictatorship that he has created, and the way in which order must be maintained there. But just as George Orwell’s 1984 centred mainly on the dangers already present in 1948, De onvolmaakten (The Imperfect Ones) is a glimpse of a future that may be less far-off than it seems. That is what sets strong science fiction apart.

It is somewhat obvious that the book deals with the impact of technology on our lives, and whether or not these intelligent algorithms will really help us to become better people. But Kieft’s future world is very convincing; the book’s strength lies in the way in which contemporary discussions play out in the future too, despite all those technological changes.

Intelligent algorithms or not, revolutions do not always deliver on their promise. And sometimes you lose, whether individually or collectively, even when you fought so hard to achieve something you believed would make the world a better place. Even in a future in which “the good” has become an end in itself, the enduring tragedy of humanity is that we are social beings who are ultimately condemned to each other. Whether the choices we can or want to make heighten or ease that tragedy is another element of the book. 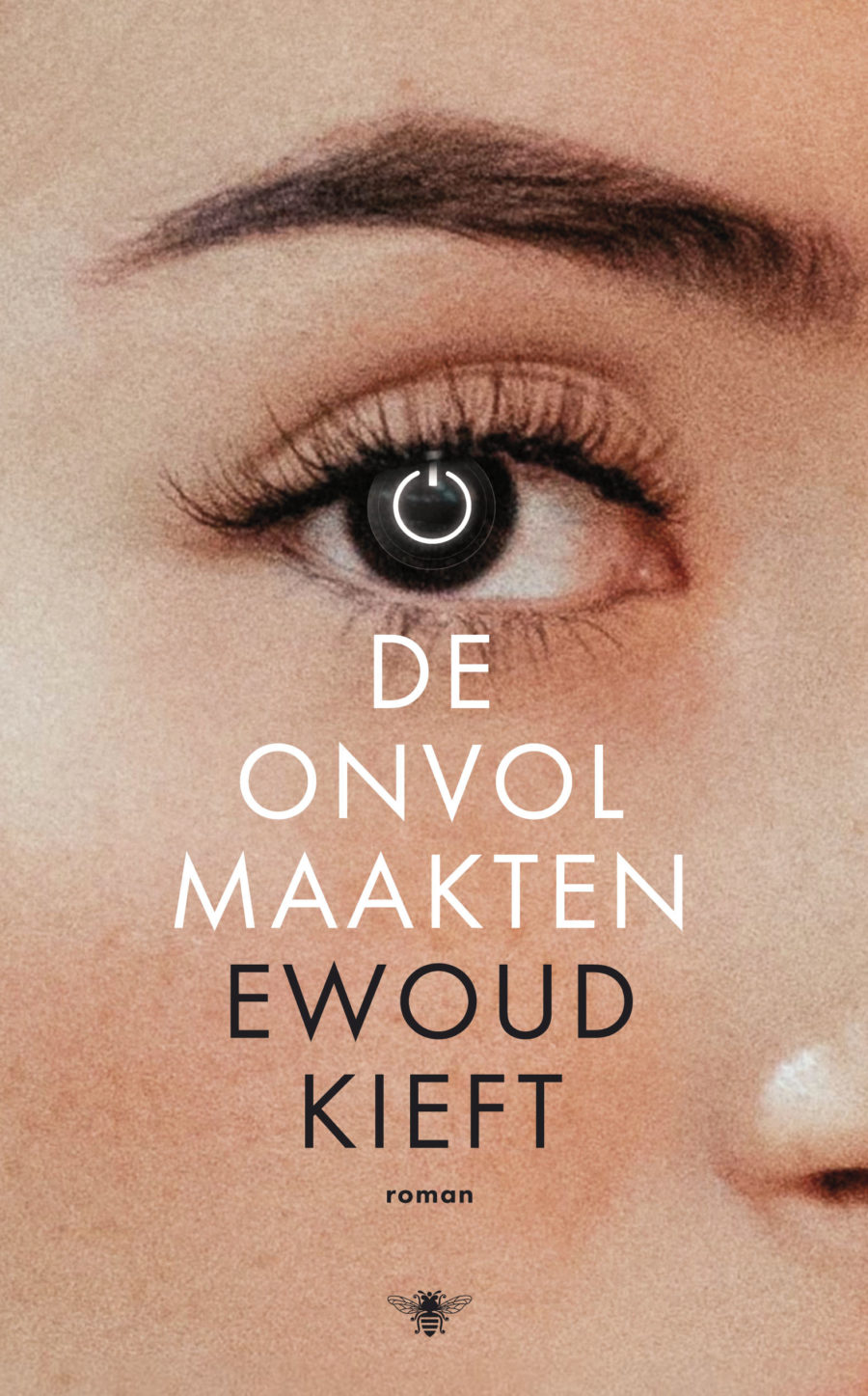 In his fiction debut, Kieft cannot hide the fact that he is a historian. Sometimes he uses a few too many words, and sometimes you feel as though he has tried to include each and every contemporary debate in his vision of the future, so not all have been fully developed. But on the other hand, that also makes De onvolmaakten (The Imperfect Ones) what it is: a rich book full of provocative thoughts, sometimes very witty, sometimes disturbing, often exciting. Because Ewoud Kieft certainly knows how to tell a story, with the proper plot twists and surprises. And with more than enough food for thought about the path we are taking as humans.

Excerpts from ‘De onvolmaakten’, as translated by Paul Vincent

I could start with the first signs, which now, with hindsight, I have come to see as the beginning of our estrangement: a certain restlessness that suddenly seized him, waves of vague, insatiable longing. He was certainly not the only one who suffered from them, but with him, they became more frequent rather than subsided. And he had long passed the age at which such behaviour can be explained in biological terms. He was thirty-two. Normally such people begin by that time to adjust to circumstances.

On a grey winter afternoon just over a year ago, thirteen months and twelve days to be exact, I remember him going on a long walk along a beach, close to the village where he had settled – temporarily, just as all his addresses had hitherto been temporary refuges. Raindrops lashed his face. Huddled in his collar, which covered his neck and chin like a second skin, he looked out over the black-green sea and the wide sand flats, over which broad strips of white foam crept trembling towards the dunes.

‘I should meet some people for a change,’ he mumbled. The wind roared past his ears, and I had to make several deductions to decipher his words. ‘Around here. Just spontaneously. Without arranging anything in advance. Like they used to do.’ Like many others, he romanticised the past, based on the idea that a few centuries ago life must have been simpler and closer. They have no idea how bitter and hard people become after freezing twelve-hour working days on a fishing cutter, or the mind-numbing mechanical shovelling in a coal-powered factory.

‘In a moment you’ll be passing the Juttersdok. There’s a drinks party organised by the Dune Planters, one of the co-ops here. Sixty per cent of those present are women, and of those thirty-two per cent are actively seeking contact with men of your age.’ I knew what he meant when he said ‘meeting people’.

He nodded and walked on, without reacting to my answer. That’s how our contact had continued for years: as if I were an extension of his consciousness, a source of knowledge and ideas which he confused with his own intelligence.

‘I don’t what it is about here,’ he started talking a few minutes later, to himself, to me or simply in a vacuum, ‘but since I’ve lived here, I’ve only been associated with women who invite me straight away on a kind of ramble, or a project day in the dunes, as if they’re actually mainly in search of extra labour.’

‘Perhaps they want to get to know you better.’

He shrugged his shoulders. ‘They can do that in a normal way. Just a chat, or straight to the Roxy or the Cavern, it doesn’t have to be a whole expedition at once, does it?’

‘Some people are not as good at sounding people as others. Some people prefer to get to know each other while they’re engaged in a common activity.’

‘Yes, yes, I understand, every bird has its own song…’

‘But while we’re talking about it: your profile needs updating by the end of the month. Shall I run few recent photos past you?’

His face darkened, his step became heavier. He had reached the soft part of the beach. ‘I don’t know, have you got something where I look good?’ After a few seconds of silence, he shook his head. ‘Let’s do it later. Can you show me a few of those Sand Planters?’

‘If you want to make a favourable impression, it helps if you at least know their names.’

‘Dune Sowers,’ he said, practising. ‘Excellent. Can you show me anything?’

‘In het jaar van de rode os’ by Marije Langelaar: The Cracks Through Which Our Lives Slowly Disappear