Anneleen Van Offel Shows the Cracks That Shape Our Lives

In her gripping debut novel Hier is alles veilig (Here All Is Safe), Anneleen Van Offel shows the large and small cracks that define and shape our lives

Many young writers and first-time authors tend not to stray far from home in their literature. In books by newcomers, autobiographical fiction currently reigns supreme, as for example in Condities (Conditions), the latest novel by Thomas Heerma van Voss. While sometimes the genre is put down as too easy, with phrases such as ‘navel-gazing’, it often produces very successful and captivating novels. One only has to think of the recent novels by Niña Weijers, Saskia De Costner, Bregje Hofstede and Hanna Bervoets. It is a familiar genre, no matter how confronting some stories may be. 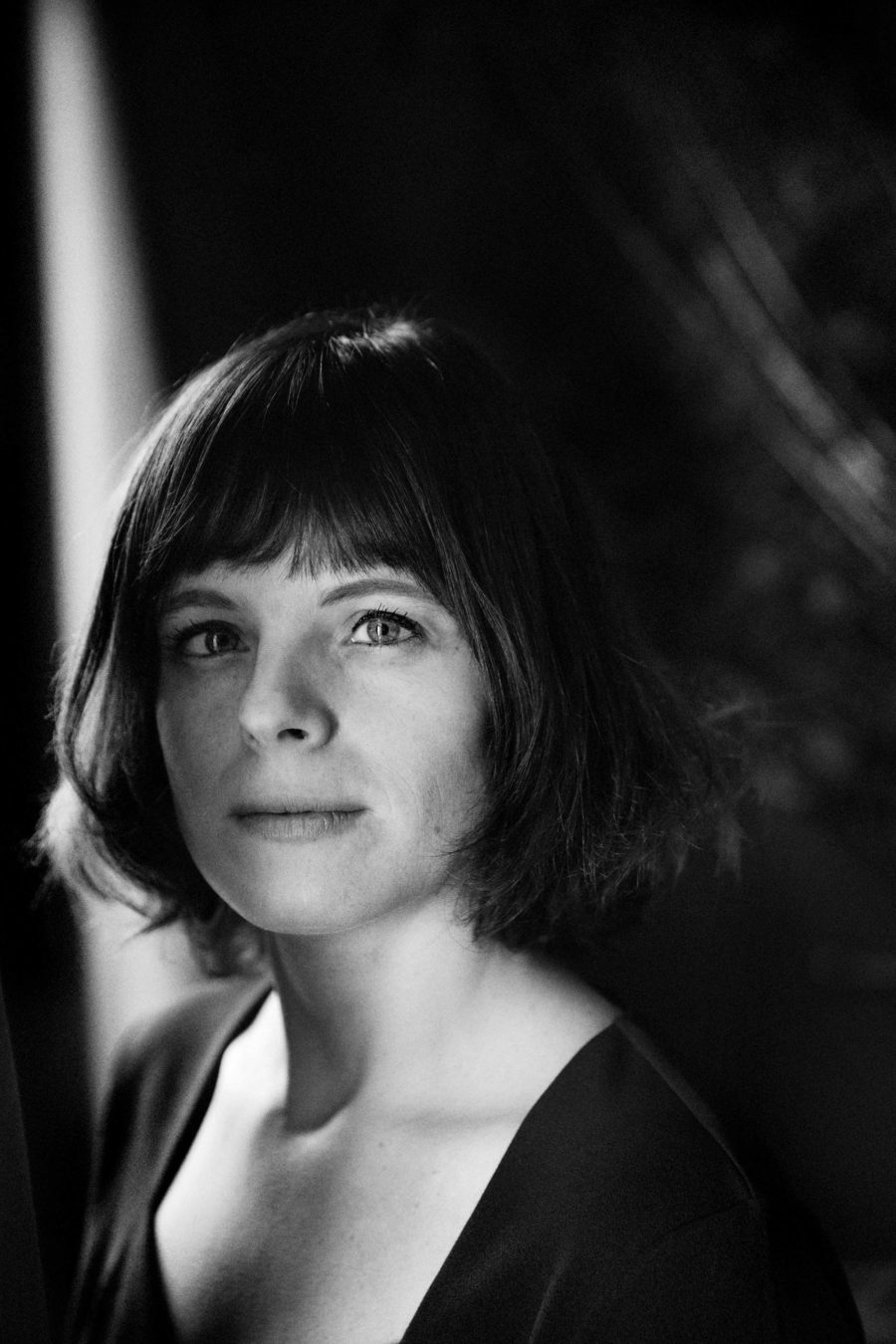 For her debut, the Flemish author Anneleen Van Offel (b. 1991) chose a different route. What started as a final assignment for her studies at the Royal Conservatoire Antwerp became an ambitious seven-year project: she travelled to Israel several times, speaking to dozens of Israelis, especially soldiers, former soldiers and their relatives.

Such an approach naturally raises expectations, not least because of the setting. Many people hold strong opinions about the Israeli-Palestinian conflict, or at least have strong feelings about it, so readers are likely to show a bias either towards or away from the book. Their opinion of the book may also depend on the position taken by the author.

Van Offel does not fall into this trap. Nowhere does she judge, instead she delicately shows how people live and survive in an area that has been torn to shreds, in a country marked by its many cracks and fissures. Israel is not only a backdrop; it is a character that determines the life of the other characters. Its societal cracks leave traces in everyone’s lives, whether they like it or not. Israel attracts and repels, seduces and kills, forcing the people who live, work and travel there to think about themselves, their own inconsistencies, their own obnoxiousness, their own imperfection. Here, Israel is a metaphor for conflict, big or small.

The obvious, somewhat accusing question of an outsider, ‘How can you live in Israel?’ turns into a more general, ‘How can you live?’ That question is compelling, universal, introspective, and one that goes far beyond easy judgement. 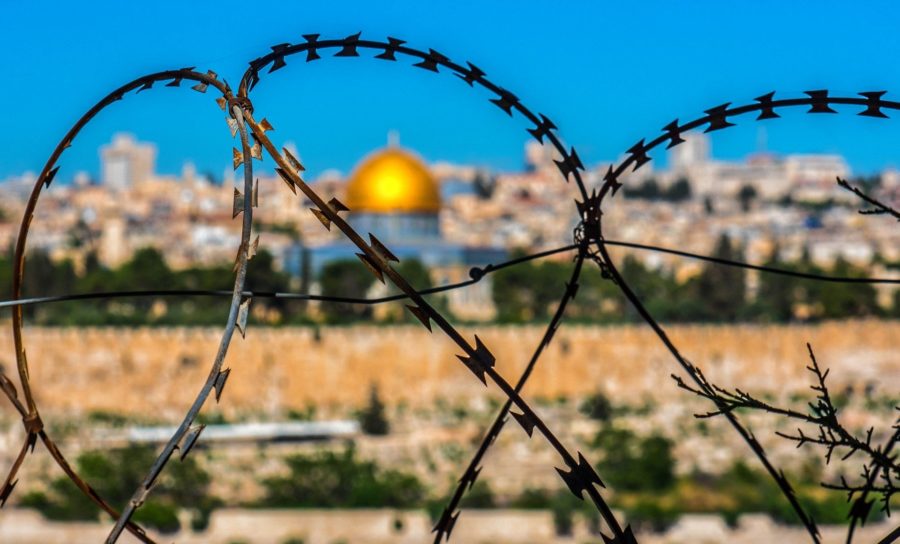 ‘Come to Israel, mama’, are the words with which Anneleen Van Offel sets her story in motion. This cry for help from Immanuel, a soldier in the Israeli army, is addressed to Lydia, a career-driven doctor in Antwerp. After some hesitation, Lydia sets off in search of the stepson she has not seen for ten years, since his father Joachim left for the Promised Land. When she met Joachim, she gained a son. And when he left, she became an ex-wife. Can one become an ex-mother? This question, too, is central to the novel.

Lydia travels through Israel, slowly becoming acquainted with her son again, but not quite in the way she expected. Yet she is getting closer to him than ever. This leads her to reflect on her own life. She daydreams about starting over, a second chance to do things differently, better. But with that dream comes doubt: how much power do we have over our destiny, or are our lives above all determined by events beyond our control? 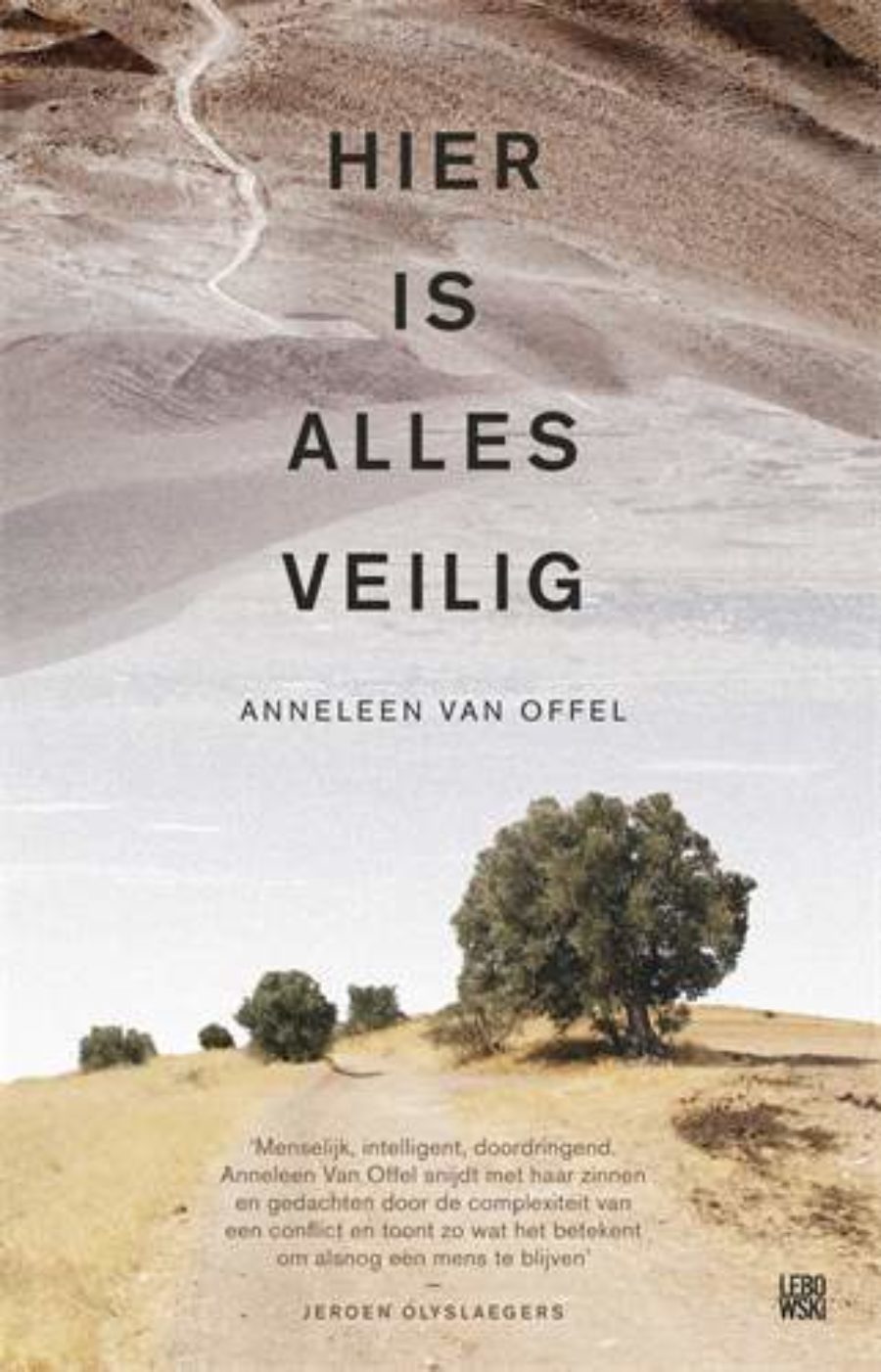 Van Offel tells her story with subtle clues, precise and detailed descriptions, in beautiful language. This is a book that has been edited and rewritten until every sentence, every word is in the right place. It is composed, yet sensitive. Empathetic, but averse to sentimentality. The book illustrates, but without judging, without imposing. In addition, its clever construction sets the novel’s pace; the urge to know more provides momentum and drives the story forward.

Hier is alles veilig (Here All Is Safe) is a multi-genre novel that you can read in different ways: as a gripping road novel, a book of motherly love, a slice-of-life novel from a war-torn area, or the coming-of-age of a young Jewish boy. But however you read it, this is a remarkable debut, a solid achievement.

Excerpts from ‘Hier is alles veilig’, as translated by Paul Vincent

‘What’s your name,’ you ask, although you know my name. I have just discharged Immanuel. You are standing with him on your arm in the doorway of the hospital room, with a small suitcase beside you. Immanuel nuzzles tearfully against you, his arms around your neck. I rub his back, the fragile twigs under his skin. A little taller than me, you look down at me. My hand on Immanuel and Immanuel on your chest, we both feel him breathe, without rattling and squeaking, without the low growl you brought him in with in a panic a week ago. I have given him his breath back.

‘Lydia,’ I say. I shed my title and surname like items of clothing and that is the beginning.

It begins with arm hairs that almost touch, which is the most erotic thing possible, two arms almost touching. Side by side in the cinema, a whole different world is unfolding before us, but we are only those two arms, two arms that later in the evening will embrace on parting, and so we will come closer and closer together until we have grown into each other’s heads and from there take over from each other, and slowly we become absorbed in that life, we lose the held breath of our first date, forget that helpless tension of arm hairs that almost touched.

At night you stroke every spot on my body and say why you think it’s beautiful. You move in with me. You say that I’m so ambitious, that everything has to give way when I want something, that I search out boundaries in order to ignore them, that I am not aware of my own strength.

The light hangs yellow and syrupy among the furniture in Ofra’s living room. Everywhere collages of her travels. Ofra surrounded by cute Asian children. Ofra on an elephant, Ofra in a hammock with a coconut in her hands. Tanned skin, dark eyes, long hair. She keeps cocking her head to one side, a girl who knows how to look her best in photos.

It is way over thirty degrees outside and yet a chill goes through me that is like metal. I could turn down the air conditioning, but for some reason my body no longer obeys me. Something in me has congealed, something that makes my movements cumbersome. It was fine for me to stay here for a little while, she was going to her family in Jerusalem for a few days anyway and her flatmates aren’t around. Now I’m here it feels far too intimate. I see too much of her. And as a result what might have been if she had still been with Immanuel.

In the kitchen I find a head painted with elephants. It is deliberately carelessly printed to make it look like something hand-made. LOVE FROM CAMBODIA. Coffee on the third shelf of the kitchen cabinet, too high to reach. Next to the cabinet is a stepladder, I cannot bring myself to take hold of it, somewhere between my brain and my muscles there is a dead end. Washing-up is drying on the rack, a crumpled towel lies on the draining board, and dishes in the sink.

She had opened the door of her flat with the flair of someone who doesn’t know that in a few minutes’ time her life will be turned upside down. With professional cold-bloodedness I intended to break the news straightaway. Now I saw the girl from the Facebook photo in front of me for the first time, I hesitated.

‘Coffee?’ she had asked. There was something lively in her voice that I didn’t believe, it sounded as if she were doing her very best to make it clear how well she was doing. I walked awkwardly around her flat, followed her to the enclosed terrace at the front, where she flopped down on an Arab sofa.

‘Well,’ she put the iron pot on an old wine case. ‘Immanuel’s mother.’ The corners of her mouth curled up.

‘Yes,’ was all I said. I swirled the coffee in the cup.

‘What do you do for a living?’ I heard myself say, playing for time.

‘It’s a bit late for us to get to know each other,’ replied Ofra.

I looked up. She was somehow sitting bolt upright, which seemed to make the sofa impossible for me.

‘Immanuel and I broke up quite a while ago, we don’t see each other anymore.’

‘Oh.’ I spilt some hot coffee on my leg, quickly dabbed it off, pretended I couldn’t feel a thing.

'De onvolmaakten' by Ewoud Kieft: A Perfect World Is Not Ideal Either

'Bult' by Marieke De Maré: A Poetic Story About the Silence of the World