Looking for Another Self in 'Confituurwijk'

Every month we draw attention to a literary debut which garnered less notice upon release than it deserves. With her first novel Confituurwijk (Jam District), Flemish author Femke Vindevogel (b. 1978) has written a blackly comic tale about a quest for one’s true self on the disadvantaged side of town.

The brief introduction to Confituurwijk is explicit: “I’m sick to death of this particular self. I want another.” This quote from Virginia Woolf defines main character Marie the Spirit, the lost soul searching for another reality in this book. Marie goes through life badly bruised, and has become quite the cynic, though she has not altogether lost her sense of humour or zest for life. “This time I’m going to succeed,” she bravely promises the reader at the outset.

We soon learn that Marie, in her early twenties, has not been spared life’s difficulties. We find her selling the family home, where her father, the village doctor and a fan of Virginia Woolf, took his own life. He simply could not continue to live with a medical blunder he had made in the past; his wife even less so. “She had not married a doctor to fall into disgrace,” Marie notes about her mother, whom she had previously lost to suicide. Growing up beside a father who drowns his sorrow in drink, Marie conducts their conversations via the intercom of his former clinic. It is in those moments that she decides never to let a man into the house and not to become a woman.

Leaving the mouldy doctor’s surgery behind, Marie moves to Confituurwijk, the notorious jam district, a disadvantaged neighbourhood where dogs are buried in front gardens, where Flemish hit songs from next door make it impossible to practise her recorder, where people eat sliced white bread with chocolate spread or jam because they can’t afford charcuterie and where revealing that you are unemployed is met with a deep sigh of relief. It seems fitting that she has ended up here; long ago her schoolteacher had foreseen things would not work out well for her. 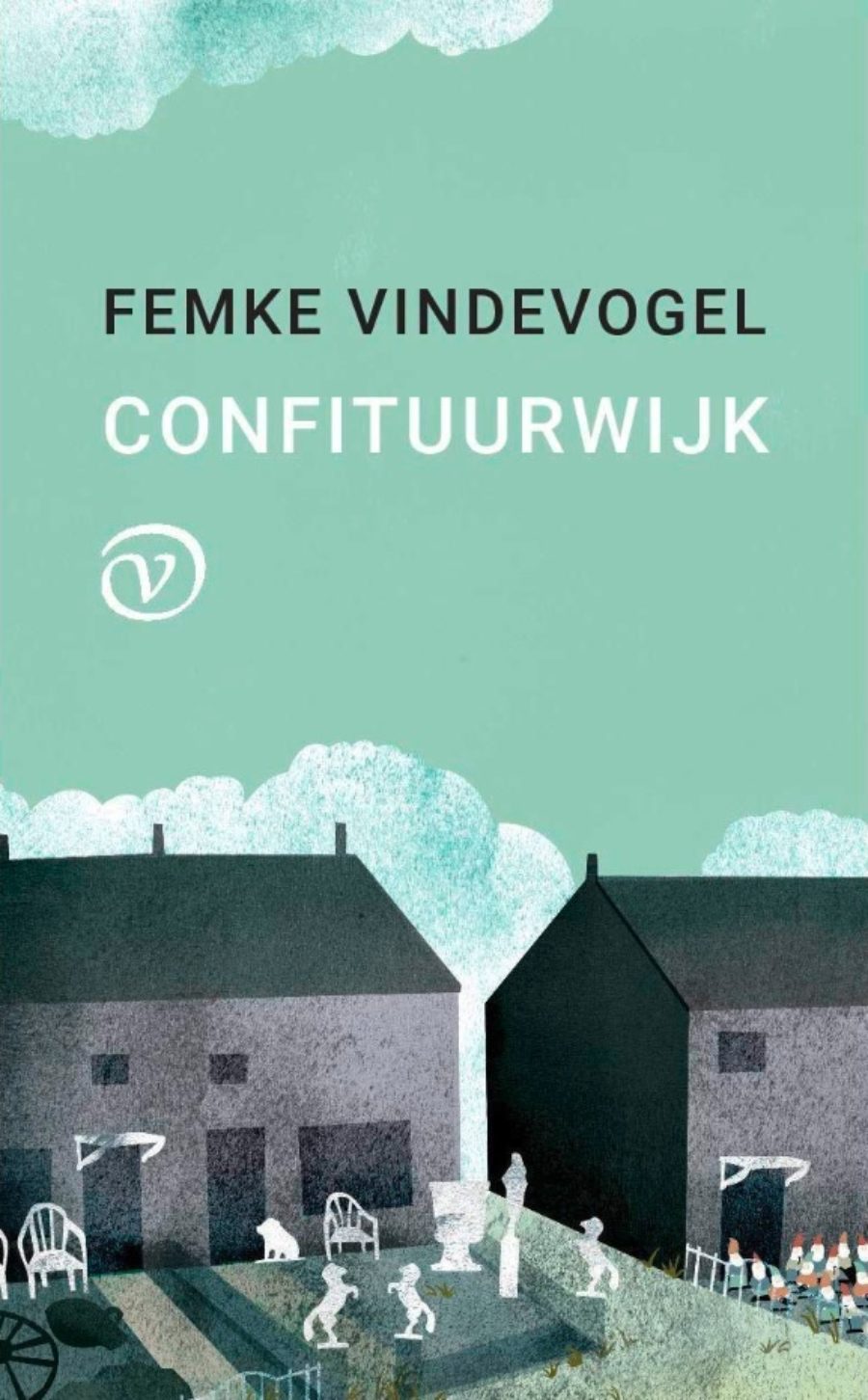 Marie had anticipated most of the bleaker and nastier sides to her new neighbourhood. But surprises lie in store, too. Her noisy neighbour Daddy Fat-tail, a.k.a. the Chronicler of Last Chances, turns out to be more a gentle giant. Intrusive, but always ready to lend a hand. And her childhood nemesis Samantha, who once turfed her from the village school, now strikes a particularly sensitive chord: “This strengthened my sultry musing: being drawn to someone, you are no longer entirely your own.” Which proves an entirely new experience.

Meanwhile Marie tries to cast off hereditary burdens. A life’s work, it would seem, because the Spirit family gene has a list of possible side effects longer than the credits on a blockbuster, as her mother taught her. In addition, Marie describes herself as an expert at disappointing others and her social life is not going swimmingly. But little by little she becomes acquainted with the people and life in the jam district. This is not where she most wants to be, as she is preparing to leave and start over again elsewhere, while simultaneously reflecting: “Everything gets nicer the longer you spend with it.”

Vindevogel writes it all down with at times very dry humour and astute metaphors, averse to dull sentimentality or romanticising a life in poverty. Confituurwijk describes the harsh and raw realities of living on the margins, but is also as gentle and tender as can be.

Paraphrasing Jane Austen, Marie observes that it’s not what we may say or think that defines who we are, but what we do. She must make up her mind whether to stay or go. Knowing full well that anywhere and everywhere you can always go looking for another, better self.

Two excerpts from Confituurwijk, as translated by Paul Vincent

Excerpt 1 – beginning of the novel, in which we make the acquaintance of Marie (pp. 11-12)

I wrote my name with my index finger on the misted-over window. I looked at the garden through the letters. The sun was low and cast shadows on the winter leeks. Everything was covered in hoarfrost. A duck was waddling on the frozen pond. The stables and the chicken run were deserted. The orchard, where once sheep had grazed, was also bare and empty. Under the trees there was a bench. For twenty-three years I watched lambs grow and midges dance there. Depending on the seasons the air smelt of ripe cherries, new-mown grass, bark and fallen leaves. The paint of the bench was peeling. The rose bushes wore their crowns like hats and had blown over forwards. They could not bear to see what was about to happen.

In every corner of the room there was down on the wall. Soft white mould that kept the peeling wallpaper warm like a blanket. In those days my mother used to empty a can of anti-mould spray a week on it, to no effect. The down returned as quickly as weeds in the garden. She blamed everything that was wrong first on the pond, then underground water and finally the clay soil of East Flanders. In Duinbergen, where she had grown up, she maintained that they had no problem with rising damp, although it was on the sea.

After her death I continued her work. I had the outside walls injected. In vain. The Alabastine that I spread over the down in thirty-five layers was a waste of money. On the day of the public sale I tried to get rid of the smell with an air freshener, but after a quarter of an hour the pine fragrance, like me, gave up. Soon the down would be someone else’s problem. I was moving. It was a matter of having to, not wanting to. My parental home was being sold.

Emma nestled against my calves. She meowed and yawned at the same time. She stuck her nails with abandon in the door frame. I let her: everyone says goodbye in their own way. Or that was what my father always said anyway. And he kept his word: people would go on talking about his exit for a long time.

I had found him in his doctor’s consulting room that was as respected as it was secret. ‘Suicide runs in the family’ I said to the policewoman who came to make a formal record of his death. Shaking her head, she looked at the head-high piles of medical periodicals which turned the room into a maze. I wondered whether like me she was thinking of the programme Extreme Hoarding. She crossed her arms, cuddled herself, demonstrating her uneasiness. Unnatural deaths are always investigated, she said. Had I found a letter? I showed her the bracelet he had left me. A simple leather cord, attached to an oval plaque on which was engraved: Someone has to die in order that the rest of us should value life more.

Excerpt 2 - First impressions of life in the Jam District

Even in the silence an invisible machine went on turning. Somewhere in the intestines of the Jam District there was rumbling day and night, as if all that concrete had a chronic bowel disease. Hasty footsteps in the street, the tram that travelled up and down and further away the song of the motorway. I got used amazingly quickly to the latter. I heard music in constant sounds like those from vacuum cleaners and the sea; they calmed me down.

The window stuck. I yanked it open. The garden of the Vetstaart family was a rubbish tip full of mugs and cigarette ends. One of the dogs was chewing on a shoe. There was a forbidden smell in the air, someone was feeding painted wood rapidly into a stove. Apart from that a vague smell of marijuana which turned out to be coming from my summerhouse. On its flat roof three lads were sitting smoking. Before I could even say anything, they made a dash for the neighbour’s summerhouse and went on running like that till they reached the last summerhouse in the street. There they jumped down. I hoped they fell into a cesspit. A pigeon on the roof cooed and agreed with me.

In my other neighbours’place a child hung like a sloth in a cherry tree. That image catapulted me to the only birthday party I was ever invited to. Above me the noisy crown of an asp, below me a group of howling classmates, Samantha at their head. She had shouted that I didn’t dare climb trees, and I had immediately proved the opposite. I had climbed higher and higher, until Samantha became an insignificant dot down below. Climbing was easy, the way down turned out to be more difficult. When I sat in that tree for the rest of the afternoon – until the mother of the birthday girl steered me down – it struck me that people who really have to prove themselves to someone are great fools. I shared that insight with my father that evening. He tapped my forehead with his index finger and said: ‘You’re right, remember who you are. You can tackle the biggest trees, but you don’t need any Samanthas to show it.’ I didn’t believe him. Fathers are simply inclined to overestimate their daughters.

I slammed the window shut, got my recorder and practised. After half a minute, the banging on the wall started. Immediately afterwards the bell. Revved up by anger and aggression, I charged to the door. I pulled it open, the recorder clutched in my hand like a weapon. The old woman from two doors down recoiled. She was holding a cake.

'Uiterste Dagen’ Is a Dark Family Novel About What Drives People