Award-winning art photographer Athos Burez tackled The Baths of Ostend, the famous painting by James Ensor, and gave it his own interpretation. Hundreds of actors were needed for this project.

In a country of eccentric artists, the 19th-century painter James Ensor stands out as one of the most bizarre. The son of a British father and a Belgian mother, he spent his entire life in the Belgian beach resort of Ostend, where he painted joyful scenes featuring Carnival processions, beach crowds and masked revellers. His former apartment in Ostend was located above a souvenir shop run by his aunt. It was turned into a museum filled with odd seaside relics, fancy hats and reproductions of his paintings. In 2020 the Bruges architect firm noAarchitecten completed a major project that connected the original building to a former hotel. The museum then came up with a suitably eccentric idea to mark the reopening of the museum. The Antwerp photographer Athos Burez was commissioned to create a modern version of Ensor’s satirical beach scene The Baths at Ostend.

The original, painted in 1890 and now hanging in Ghent’s Museum of Fine Arts, featured dozens of figures on the beach, including amorous couples, solemn priests and the occasional frisky dog. Undaunted by the challenge, Burez took over the beach on two September days in 2020. He set to work recreating the scene after marshalling a cast of 180 people, a team of stylists, two horses and some playful dogs.

With the help of digital techniques, Burez managed to recreate many of the details in the original painting, including a portly man in a stripy bathing costume, a kissing couple and a filmmaker perched on a beach hut. He even persuaded the curator of the Ensor Museum to stand in for the eccentric artist.

The photographer went on to add contemporary touches, such as a boat filled with refugees (modelled on Géricault’s Raft of the Medusa), piles of abandoned rubbish and daytrippers with their cool box. One hundred and thirty years on from Ensor’s painting, it seems as if Ostend beach is just as chaotic. 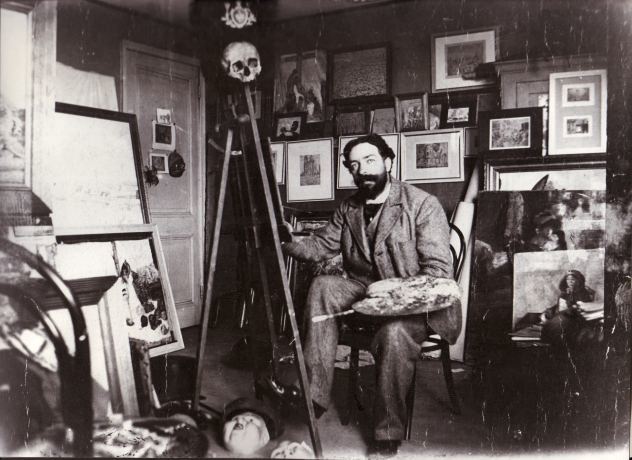